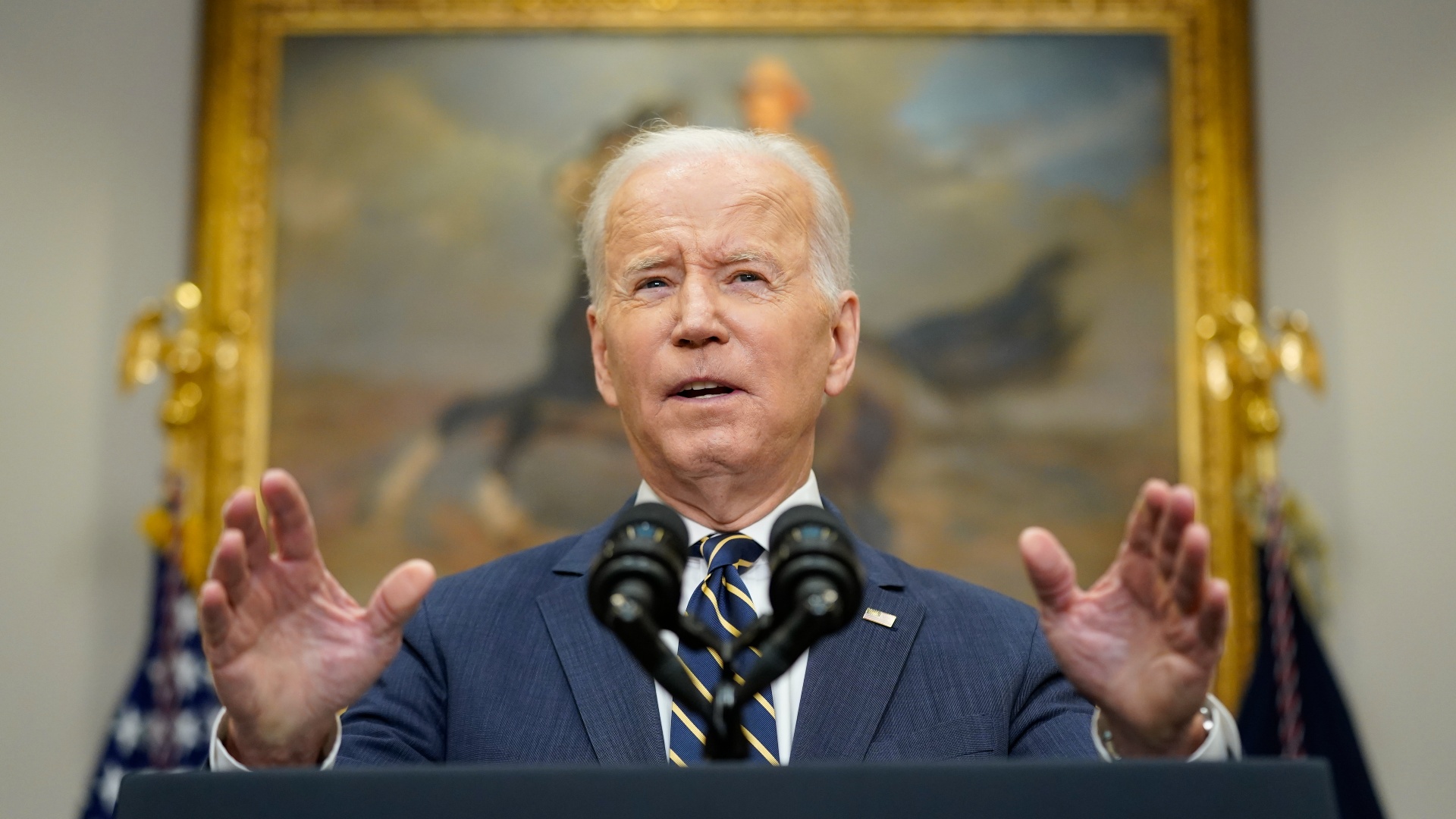 President Joe Biden announces that along with the European Union and the Group of Seven countries, the U.S. will move to revoke “most favored nation” trade status for Russia over its invasion of Ukraine, Friday, March 11, 2022, in the Roosevelt Room at the White House in Washington. (AP Photo / Andrew Harnik)


WASHINGTON (AP) — President Joe Biden announced Friday the U.S. will dramatically downgrade its trade status with Russia as punishment for its invasion of Ukraine and also ban imports of Russian seafood, alcohol and diamonds.

The broad trade shift, which revokes the “most favored nation” status for Russia, is being taken in coordination with the European Union and Group of Seven countries.

“The free world is coming together to confront Putin,” Biden said from the Roosevelt Room of the White House. He also said countries were adding new names to a list of Russian oligarchs who are facing sanctions, and the U.S. is cutting the flow of high-end American products such as expensive watches, cars and clothing.

“We’re banning the export of luxury goods to Russia,” he said.

Biden said there would be further retaliation if Ukraine is targeted with chemical weapons, a possibility that administration officials have warned about in recent days.

“Russia would pay a severe price if they used chemical weapons,” he said.

Stripping most favored nation status from Russia would allow the U.S. and allies to impose higher tariffs on some Russian imports, increasing the isolation of the Russian economy.

Biden’s changes on Russia’s trade status come as bipartisan pressure has been building in Washington to revoke what is formally known as “permanent normal trade relations” with Russia. Ukrainian President Volodymyr Zelenskyy pressed the U.S. and allies to take the action against Russia in remarks to Congress over the weekend. It follows days after the Biden moved to ban imports of Russian oil and gas products.

This week’s moves are the latest in a series of sanctions aimed at crippling the Russian economy and a sign that the U.S. and its allies will continue to use their financial heft to retaliate against Russian President Vladimir Putin. The other measures include the freezing of central bank assets, limits on exports and sanctions against Russian oligarchs and their families. These financial tools have led to the Russian ruble losing about half of its value against the U.S. dollar over the past month, which has caused destructive inflation that could erode Putin’s ability to wage a prolonged war in Ukraine.

Most favored nation status has been a baseline for global trade, ensuring that countries within the World Trade Organization are treated similarly. Some countries in the WTO have special privileges due to their status as developing economies. Russia would join the ranks of Cuba and North Korea by not having MFN status from the U.S.

The revocation carries mostly symbolic weight. The earlier sanctions on imports of Russian oil, gas and coal already cut off about 60% of U.S. imports from the country, and the new import bans announced Friday add up to only about $1 billion in revenue, according to White House figures.

Russia provided less than 1% of U.S. vodka imports in December, according to the Distilled Spirits Council of the United States, and less than 2% of U.S. seafood imports by volume, according to federal statistics.

Because Russian imports into the U.S. are primarily natural resources, they would generally face little to no increase in their tariffs because of the lost status, Ed Gresser of the Progressive Policy Institute in Washington, said in an online post.

Instead of the current tariff rate, buyers of Russian goods would pay rates established under the Smoot-Hawley Tariff Act of 1930, which disrupted trade during the Great Depression. This would still be zero for uranium, rhodium, palladium, silver bullion and king crabs. But the import tax would shoot up for unwrought aluminum, plywood, semi-finished steel and diamonds, among other products.

On Monday, Democrats on the powerful House Ways & Means Committee posted, then removed, an announcement on a bipartisan bill to ban Russian oil imports and slap further trade sanctions on the country, according to an aide, because of pushback from the White House against acting before Biden had coordinated with allies and reached a decision on both matters. The House voted Wednesday on a narrower bill to ban Russian energy imports after Biden instituted the ban by executive order.

Gov. J.B. Pritzker on Wednesday signed into law legislation that bans so-called "ghost guns" across Illinois, making it the first Midwest state to do so. House Bill 4383 aims to crack down on "ghost … END_OF_DOCUMENT_TOKEN_TO_BE_REPLACED