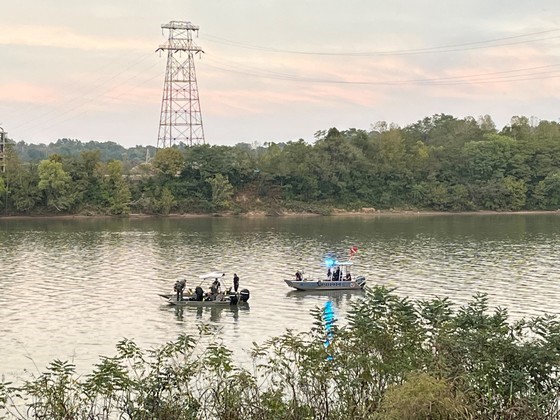 AURORA, Illinois (WANE) – Detectives in Indiana and Ohio may be closer to solving a missing-persons investigation after a vehicle connected to a 2002 case was located in the Ohio River.

Stephanie Van Nguyen, 26, and her children Kristina, 4, and John, 3, of Delhi, Ohio, were last seen in April 2002. Before their disappearance, Nguyen had left behind a note, relaying her intentions to drive into the Ohio River. Her Nissan Pathfinder SUV was never found.

The Delhi Township Police Department recently decided to investigate the case once more, this time using side sonar scan technology to search the river. The scan eventually led divers to a 1997 Nissan Pathfinder in the Ohio River, near Aurora, Indiana. The plates on the car confirmed it had belonged to Nguyen.

A towing company, working with dive teams from the nearby Hamilton County Police Association and the Indiana Department of Natural Resources, extracted the car from the river on Wednesday. The SUV was then transported to another location for further investigation.

The Dehli County Police Department wrote on Facebook that that its original search efforts in 2002 “went cold” after a long investigation. Earlier this year, however, the department employed side scan sonar technology to more easily search the riverbed, resulting in the discovery of “three unique objects” during the last six months, and eventually the discovery of Nguyen’s SUV.

“Indiana State Police is now assisting Delhi Police to determine if Mrs. Nguyen and her children were in the vehicle,” the Dehli police department wrote.

The Ohio Attorney General has also kept a missing-persons report open for the Nguyens, along with age-processed photos of the kids as they may have looked as teens.

CHICAGO — The City Council on Monday delayed a vote on Mayor Lightfoot’s curfew change — but a group of young residents are urging members to vote no. The young adults are part of the racial … END_OF_DOCUMENT_TOKEN_TO_BE_REPLACED

The fire at the former Pheasant Run Resort, 4051 E. Main St., broke out Saturday afternoon, sending huge plumes of smoke into the sky surrounding the closed resort and drawing dozens of onlookers who … END_OF_DOCUMENT_TOKEN_TO_BE_REPLACED

As the 2022 political season gets into full swing, one of the most intriguing candidates for elected office is Herschel Walker. The star running back with the University of Georgia and Dallas Cowboys … END_OF_DOCUMENT_TOKEN_TO_BE_REPLACED