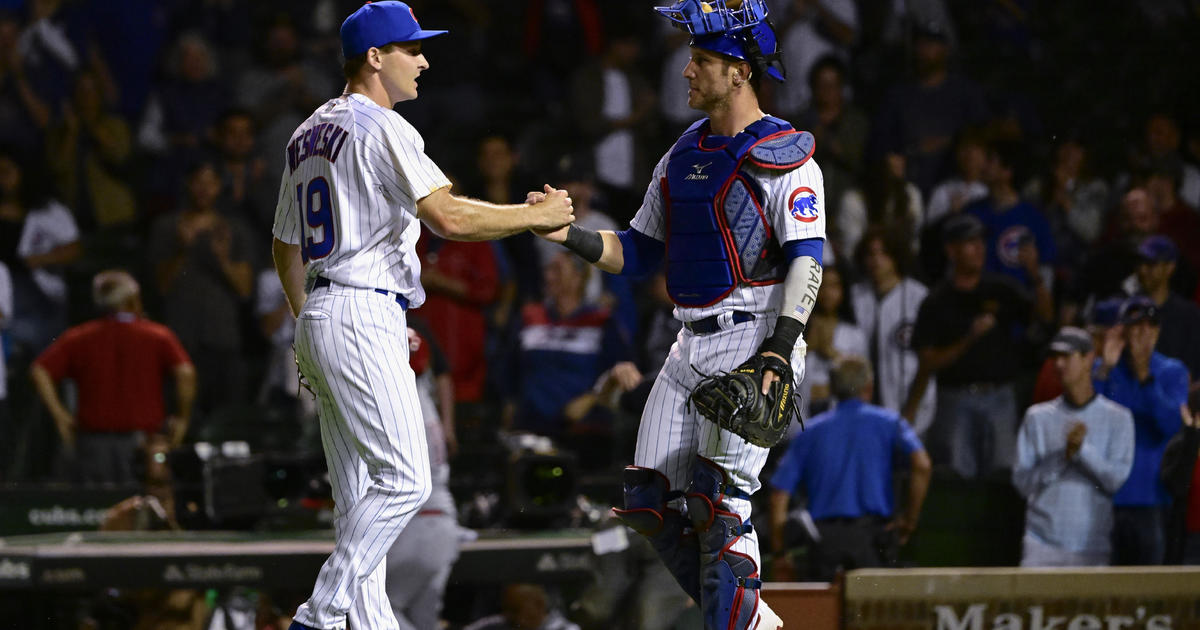 Wesneski (1-0), a 24-year-old right-hander acquired from the New York Yankees on Aug. 1 for reliever Scott Effross, struck out eight and walked one in front of about 20 family members and friends from Texas.

He relieved Wade Miley, who returned from a shoulder injury to make his first start since June 10. Wesneski retired 13 of the first 14 batters around a walk before Spencer Steer doubled with one out in the ninth and Aristides Aquino singled. Wesneski struck out Jake Fraley and Jose Barrero to end the game.

Wesneski threw at up to 95.7 mph, mixing 26 curveballs and five changeups among 61 pitches and getting four of his eight swings and misses on curves. He was 6-7 with a 3.51 ERA in 23 starts at Triple-A Scranton/Wilkes-Barre and 0-2 with a 5.66 ERA in five appearances at Triple-A Iowa.

Seiya Suzuki tied the score 3-3 with a two-run homer in the fifth off Justin Dunn. Nick Madrigal poked a two-run single off Fernando Cruz in the sixth that landed in front of right fielder Aristides Aquino. Madrigal’s hit followed Nico Hoerner’s leadoff single against Ian Gibalt (1-1) and Christopher Morel’s walk off Relver Sanmartín.

Chicago scored three runs on batters who reached on walks and another with a batter who was hit by a pitch. Cinciinnati’s 11 walks were its most since Aug. 8, 2018.

All of the Cubs’ runs scored with two outs.

Reds manager David Bell was ejected by plate umpire Carlos Torres with two outs in the top of the ninth after complaining about Torres’ strike zone. It was Bell’s third ejection this season and the 19th of his career.

Cincinnati (53-80), which had four hits, is two losses from ensuring a losing record. The Reds began the year trying to string together three straight winning seasons for the first time since four in a row from 1985-88.

Miley, who missed 76 games because of a left shoulder strain, allowed three runs — two earned — and two hits in four innings. He struck out six, walked two and generated 14 swings and misses.

Ian Happ homered in the first, his 26th homer against the Reds.

Suzuki, who hit his 11th homer, is batting .349 (22 for 63) with five doubles and two homers in his last 18 games. Suzuki also walked with the bases-loaded in the seventh.

Ben Zobrist, a member of the Cubs’ 2016 championship team, is a team ambassador, and President of Baseball Operations Jed Hoyer would like to see Zobrist play a larger role on the baseball side.

“There’s a lot of value to having him around,” Hoyer said. “We haven’t talked about him in a specific role, but I’d love to have him in spring training and have him around the guys. It is a perspective and a career, a work ethic that’s unique.”

Reds: CF NIck Senzel was scratched from the starting lineup because of a right ankle sprain and was listed as day-to-day. … RHP Graham Ashcraft (right biceps soreness) threw a bullpen session Tuesday and is expected to throw live batting practice Friday.

Reds: OF Albert Almora Jr. was activated from the 10-day IL after recovering from a bruised right shoulder. INF Colin Moran was designated for assignment.

Cubs: C Willson Contreras (left ankle sprain) was placed on the 10-day IL retroactive to Sept. 2. “It’s hard to play at 70-80% on something like that,” manager David Ross said. … LHP Justin Steele (low back strain) was placed on the 15-day IL, retroactive to Sept. 2. Steele (119 innings) and Thompson (104 1/3) have set career-highs in innings and want to return to finish the season. “Neither is an injury we’re concerned about, but we don’t want to ramp them too quickly and throw them out there for no reason,” Ross said. … OF Michael Hermosillo (left quad strain) was activated from the 60-day IL. … RHP Luke Farrell, Nicholas Padilla and Kervin Castro were designated for assignment.