Another week, another member of the Chicago City Council who’s “tired of this” and not running for reelection.

Reboyras will serve the remainder of his term and call it a career — after 20 years as alderperson and 44 years in city government — when the new council is sworn in next May.

That means 15 of the council’s 50 members elected in 2019 already have left or announced they will be departing.

“Why now? Why not? Forty-four years in city government. I want to spend a little more time with my mom, who’s very ill, and she’s 92. That’s No. 1 for me. And help out my brother. He’s not doing too well, either,” said Reboyras, 69.

“I’m tired of this. I have no ill feelings about anybody in city government, the mayor or anybody. It’s just the right time for me.”

Reboyras said he’s been “maxed out” on his pension and either “working for nothing” or “paying to come to work” for “at least three terms.”

“I just thought it was a good time to let a younger person take over with bright ideas.”

In a business filled with show horses, Ariel Reboyras is a workhorse.

He’s the very definition of what former Ald. Tony Laurino used to call an “alley alderman” — an old-school throwback more concerned about delivering city services to constituents than generating headlines and preening for the cameras.

Reboyras started as a city truck driver and worked his way up in the departments of Streets sand Sanitation, Water Management and General Services before becoming an alderperson in 2003.

“I worked in several departments. I knew what it was like to provide the services to constituents when I came into this job. The average person does not,” said Reboyras.

“I just do my job. That’s all. … I’m not into big talks. I’m not into TV. I seldom talk to reporters. I’m just me. … I have an opportunity to say goodbye to city government. And I want to do it as I quietly can. That’s Ariel. That’s my style.”

But four years ago, Reboyras was thrust into the limelight he tries to avoid.

As Public Safety chair, he was forced to carry the water on police reform for then-Mayor Rahm Emanuel in the furor that followed the court-ordered release of the Laquan McDonald shooting video.

After Emanuel fired then-CPD Supt. Garry McCarthy, the Police Board, led by Lori Lightfoot, conducted a nationwide search for a replacement and sent three finalists to Emanuel. But Emanuel rejected all three, and Reboyras helped convince his colleagues to change the law mandating a second nationwide search. Instead, the council ratified Emanuel’s appointment of Eddie Johnson as CPD superintendent.

Reboyras also fended off demands by police reformers and the council’s Black Caucus to change a police contract the Lightfoot-led Task Force on Police Accountability had said “turns the code of silence into official policy.”

Reboyras was then forced to preside over public hearings on four rival proposals for civilian police review. One hearing became so chaotic it had to be cut short.

No wonder Reboyras told the City Club of Chicago at the time: “I feel like the walls are crashing in on me.”

“Police oversight was tough. No doubt about it … But you’ve got to do what you’ve got to do. … My daughter’s a police officer. That makes it very hard for me,” the retiring alderperson said Monday.

“Policing has changed — not just in Chicago, but across the country — … Every time you look around, there’s another piece of reform legislation. That makes it very difficult for police officers. … Everything has to be upfront. … You have to have your cameras on. No room for errors.”

Reboyras denied he’s walking away for fear of losing a rematch to Gutierrez, who announced her candidacy for 30th Ward alderperson on Saturday. But he hinted strongly he considers Jessica’s candidacy with her father’s backing a political betrayal by Luis Gutierrez.

“When he first became an alderman, I worked a precinct for him. … I got signatures for him for the congressional district race. I supported him all this time,” Reboyras said.

Pressed on why Luis Gutierrez turned on him, Reboyras replied: “Why don’t you ask him and maybe tell me afterwards?”

He added: “I’m a pretty nice guy. I’m easy to get along with. I don’t bad-mouth anyone. I mind my own business.” 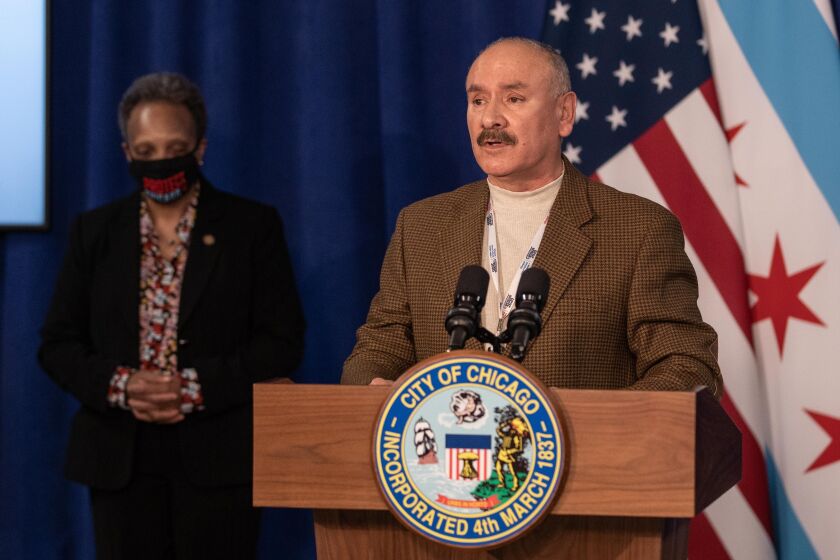 Ald. Ariel Reboyras (30th) speaks during a press conference at City Hall in February 2021 where Mayor Lori Lightfoot signed the Welcoming City Ordinance, which offers more protection to undocumented immigrants and prevents the Chicago Police Department from working with federal immigration officials in some cases.

In an uncharacteristically long interview with the Sun-Times, Reboyras made no apologies for his work as a North Side coordinator for the now-defunct Hispanic Democratic Organization at the center of a city hiring scandal.

“Did I know about any of that? Well, we got jobs. Everybody got jobs through politics in the old days. Not just HDO. Everybody. But it’s sad that everybody only remembers HDO,” Reboyras said.

“Everybody talks about HDO this and HDO that. … Everybody got help from HDO. … We did a lot of work for people. We helped elect many candidates. … We did excellent work doing campaigns. Everybody sought the help of the Hispanic Democratic Organization. And it wasn’t just Hispanic liaisons. It was a citywide organization.”

During 44 years in government and politics, Reboyras served under three mayors: Daley, Emanuel and Lightfoot.

He described Emanuel and Lightfoot as similar personalities in that they are both “tough to work with” and “no-nonsense.”

“If you needed to speak to the mayor directly, I could call Rahm. If you need to speak to Lori Lightfoot directly, you can call her directly — and I’ve done that many times. They both answered the phone when I called,” Reboyras said. “But you couldn’t call Daley on the phone because he didn’t carry a phone with him.”

Daley was believed to avoid cell phones out of concern the feds might be listening.

“He came in the era when there were no cell phones, and he never adjusted to it. Never had a phone. … You had to go through his administration [to get through to him]. It wasn’t difficult. It just took a little more time.”

Of all the positions he has held in city government, Reboyras said his favorite job was as a substitute teacher at Roberto Clemente H.S. who moonlighted as a football and wrestling coach.

“It was a happy time. I really enjoyed working with the kids,” he said. “I wanted to stay there. I wanted to be a full-time employee there. It didn’t happen.”

Why did he leave the teaching career he loved?

“I didn’t have a permanent school,” Reboyras said. “I was tired of subbing every day calling at 5:30 in the morning to find out where I’m going.”