Ald. Tom Tunney (44th), the powerful chairman of the City Council’s Zoning Committee and a key member of Mayor Lori Lightfoot’s leadership team, is retiring from the workplace he called “not a good place to work these days.”

“I have always strived to do my best for the residents and businesses in the Lake View community and have been honored by the remarkable opportunity to serve the residents of the 44th Ward for almost twenty years,” Tunney, owner of Ann Sather Restaurants, said in a statement released Tuesday, the first day to circulate nominating petitions for alderperson, mayor and other citywide offices.

“I am grateful for the trust they put in me to help lead Lake View forward in ways that benefited residents, businesses and visitors alike. I will continue to work tirelessly for the ward through my last day on the City Council. As I look ahead, I see so many great ways in which I can continue to give back to the city I love.”

Tunney could not be reached for comment. His longtime chief of staff, Bennett Lawson, wasted no time in entering the race to replace Tunney with the retiring alderman’s “strong endorsement.”

Former Gov. Pat Quinn, mulling his own race for mayor, said he talked to Tunney on Tuesday and the retiring alderperson “didn’t rule out” challenging Lightfoot. But, Tunney was “not definitive” and said he was still talking to people about the race, Quinn said.

Tunney’s statement cited a long list of accomplishments, including the Center on Halsted, the AIDS Garden and the massive renovation of Wrigley Field and development of the land around it — with no subsidy from Chicago taxpayers.

Implied, but not stated, was that Tunney battled the Cubs over all things Wrigley over the last two decades — prompting the billionaire Ricketts family that owns the team to run and bankroll a challenger — whom Tunney handily defeated.

Tunney’s impending exit after 20 years on the job is no surprise.

The 20-year veteran alderperson told the Sun-Times earlier this month that he would join the parade of alderpersons leaving the City Council, — either to challenge Lightfoot or to retire entirely.

“There’s a lot of alderpersons who feel they haven’t been paid much attention to in regards to their needs of their individual wards. There’s a lot of acrimony in the council. … And I just think that a lot of people feel that it’s not a good place to work these days.”

Tunney plans to stay through the end of his term. His departure speeds the transition to a Chicago City Council that will look dramatically different in the next term, with at least 12 new members compared to the Council seated after Lightfoot’s 2019 election.

Scott resigned his City Council seat to take a job with Cinespace Film Studio in his West Side ward.

Alderperson Howard Brookins (21st) is awaiting an Ethics Board ruling on conflicts posed by his law practice before deciding whether to seek reelection after losing a judicial race.

Alderpersons Sophia King (4th), Roderick Sawyer (6th) and Ray Lopez (15th) are giving up their seats to run for mayor. Ald. George Cardenas (12th), Lightfoot’s deputy floor leader, is likely leaving after taking the first step toward winning a seat on the Cook County Board of Review.

Tunney was appointed in 2002 by then-Mayor Richard M. Daley to fill the vacancy created by the pre-election resignation of Ald. Bernard Hansen. It was a groundbreaking moment in Chicago politics. At the time, Tunney was Chicago’s first openly gay alderperson. Now, Tunney chairs a five-member Gay Caucus.

He’s an elder statesman at a political crossroads.

“I never thought I would be an alderman this long. I’m a person who wants to come in, make a difference and move on. A lot of the work that I’ve done has taken more than one term or two terms — i.e., the AIDS Garden, the Center on Halsted, some of our legislative priorities. But I’m comfortable — not only in the restaurant business, but in my aldermanic career. I could leave on a high note,” he told the Sun-Times earlier this month.

“I don’t want to overstay also. You’ve seen some of our colleagues over the years who probably have been there too long. … We’ve got to bring new leadership in.”

Tunney is the third member of Lightfoot’s leadership team to signal a break with the mayor that could undermine her re-election bid. The others are Workforce Development Committee Chair Susan Sadlowski Garza (10th) and Aviation Committee Chair Matt O’Shea (19th).

He has warned that North lakefront voters who propelled Lightfoot to a first-place finish in the first round of voting in 2019 have soured on the mayor and are “searching for an alternative.” 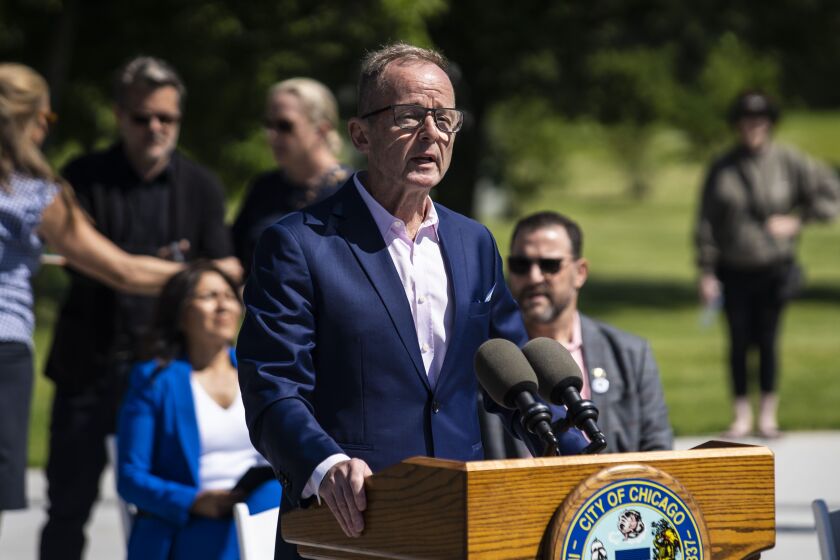 Ald. Tom Tunney (44th) speaks at the grand opening of the AIDS Garden Chicago in June.

“It’s safety No. 1. She got good marks for the COVID. But some of the school policies and her friction with [the Chicago Teachers Union] and having kids in school really hurt her in the North lakefront wards,” Tunney said this month.

“A number of our young parents really want to be in public schools. We spent a lot of time on improving neighborhood public high schools — Lake View and Amundsen — to give more choices for our parents. But we’ve seen the enrollment declines. … We’ve got to get them back into our public schools. We’ve got to get them in our high schools. Not just the selective enrollment [schools] but our neighborhood high schools. … Those are the people that any mayor has got to keep in the city.”

Since Tunney did not respond to a barrage of phone calls or text messages from the Sun-Times, it was not known whether he is still considering challenging Lightfoot.

Over the years, Tunney has flirted with running for mayor repeatedly. This time, he said he told the Sun-Times this month that he hasn’t “completely ruled it out” and it “could be exciting for me” as a “young, 60-ish kind of guy” with plenty of “energy and initiative left” and a history of “bringing people together.”

“People want a unifier. People want somebody [who] can bring people together. Her personality is strong and can be somewhat divisive. She’s vulnerable. She knows that. A lot of people are looking for an alternative,” he said.

Lightfoot blames her contentious relationship with council members on the fact that “I don’t buy votes.”

Tunney believes it’s deeper than that.

“Her background as a prosecutor has some influence on the way she operates her office. … It’s more like, ‘I’ve got all the answers, and we’re going my way.’ … Her style is that of a prosecutor — you’re guilty until proven innocent,” he said.

“As a chief executive, she’s got to work more behind the scenes and be more collegial and respectful.”