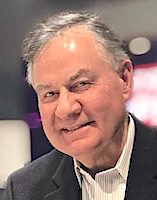 • Cumulus News-Talk 890 WLS-AM/Chicago announces legendary Windy City political reporter Bill Cameron is rejoining the station as the producer and host of Take 1 with Bill Cameron, a new weekly radio show and podcast that debuts Sunday, May 1 and airs every Sunday from 5-6pm. The award-winning Cameron retired from full-time reporting in August 2021 after more than 50 years of covering Chicago politics. Take 1 with Bill Cameron will present Cameron’s unedited interviews with Chicago newsmakers and discussions about local breaking news. His first guest this Sunday is Senator Dick Durbin.

“It’s impossible to walk away from Chicago,” Cameron said. “This is the city with politics that wouldn’t be believable in a movie script, architecture that architects worldwide come to study, Nobel Prize-winning intellectuals, nationally renowned restaurants, performing arts, and museums, eight professional sports teams that alternately thrill and confound diehard fans, and more than 200 diverse neighborhoods in 78 community areas.” Cameron added, “Take 1 with Bill Cameron is the kind of program ideally suited to radio — ask a question, get out of the way, don’t interrupt, and let interesting people tell their stories — no sound bites, no spin, no shouting, no editing.”

Stephanie Tichenor, PD of 890 WLS-AM, commented, “We are delighted to welcome back Bill Cameron to the Big 89. The news doesn’t stop… and neither does Bill.”

Gov. J.B. Pritzker on Wednesday signed into law legislation that bans so-called "ghost guns" across Illinois, making it the first Midwest state to do so. House Bill 4383 aims to crack down on "ghost … END_OF_DOCUMENT_TOKEN_TO_BE_REPLACED