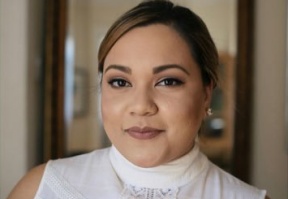 “We must challenge City Hall to do better,” Jessica Gutierrez told a crowd of supporters over the weekend as she stood with her husband and 16-month-old baby, in front of the Belmont-Cragin home where she’s lived for many years.  “It’s time to stop the rubber-stamp City Council. When the community speaks, I will listen.” This is Gutierrez’s second campaign for 30th Ward Alderperson. In 2019, she lost to Reboyras by 302 votes (out of about 7,900 cast).  Reboyras –who is rumored to be considering retirement or another position in county government – may not run, but even if he does, she’ll be ready. Since 2020 Gutierrez has been supporting the Belmont-Cragin and surrounding community as Director of Community Outreach for the Puerto Rican Cultural Center. Gutierrez helped lead the PRCC–long known for its work on the Paseo Boricua along North Avenue–to open a satellite office a bit north and west of West Humboldt Park in Belmont-Cragin. She helped the agency play a key role serving the community throughout the COVID-19 pandemic, noting that unlike some other groups, PRCC’s doors remained open throughout the crisis. “We kept the kids fed, kept the landlords paid, and helped people get vaccinated,” Gutierrez says. She faults incumbent Ald. Ariel Reboyras for failing to be present for all constituents in the 30th Ward in the past four years. Gutierrez is the daughter of former Congressman Luis Gutierrez, whose pivotal role and leadership in Chicago politics goes back to the days of Harold Washington and Council Wars and who continues to serve as a leader in the community on immigration reform among other issues. Jessica Gutierrez graduated from St. Benedict High School and has a BA in Sociology from the University of Illinois at Urbana-Champaign. She’s running for alderman as a lifelong progressive Democrat, educator and community organizer.