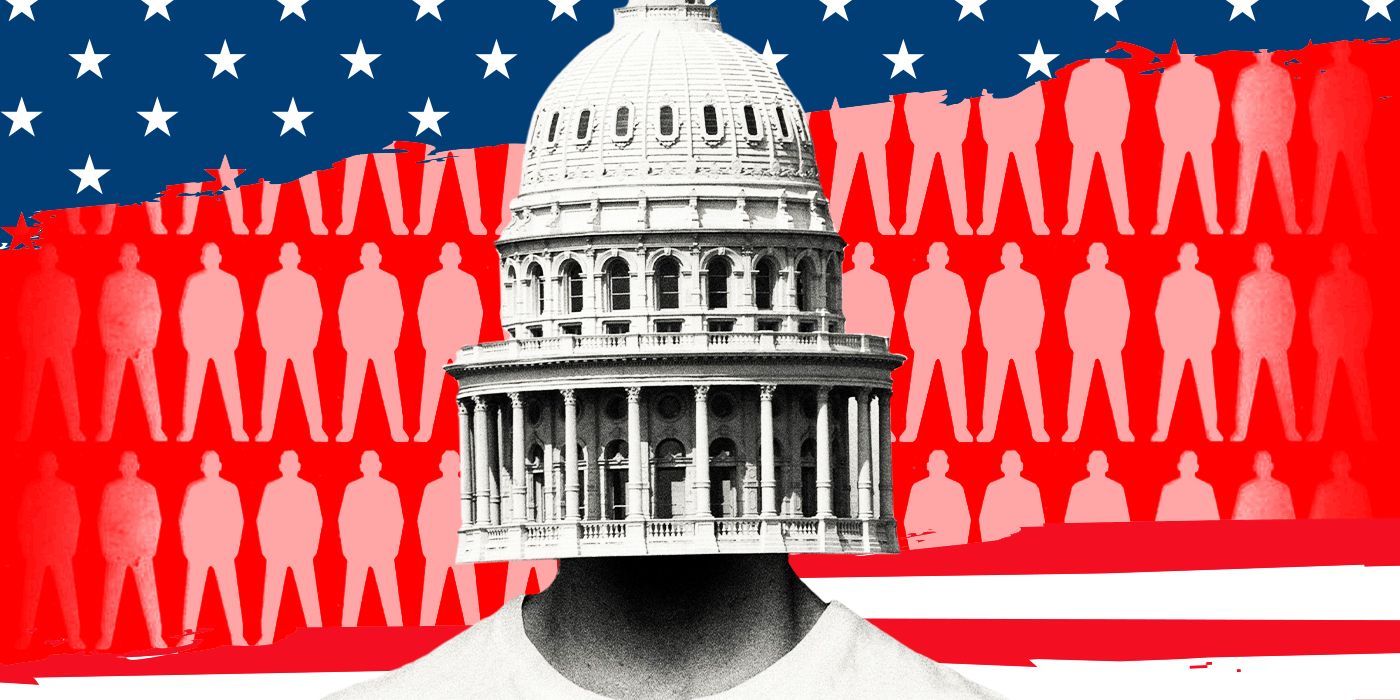 The hamster wheel of the 24-hour news cycle often feels like nonstop electioneering. Never has this been more true than in the years since 2020. Cultural and political tensions are running high across the country with an economy teetering on the brink of recession and a Supreme Court hacking away at civil liberties for marginalized groups. It’s easy to get dragged under the lightning-fast current of scandal parades and news bulletins of death here, destruction there, threats everywhere. It’s easy to feel small and helpless in the face of so much vitriol.

The eight documentary films gathered below chronicle the triumphs, defeats, and awkward growing pains of modern American democracy. These films celebrate the messiness of the political process and the promise of true representation, the fragility of democracy in action.

COLLIDER VIDEO OF THE DAY

While most of the United States government functions as a representative democracy, certain laws and constitutional amendments are decided through ballot initiatives. Directed by Heather MacDonald, Ballot Measure 9 follows the story of one such ballot initiative. On the ballot across the state of Oregon during the 1992 election, Measure 9 would have added antique language to the Oregon state constitution requiring “all levels of government” to affirm that homosexuality is “abnormal, wrong, unnatural, perverse, …[and] to be avoided.”

If this sounds familiar, it is a direct ancestor to Governor Ron DeSantis’ “Don’t Say Gay” law passed this year in Florida. The existence of Portland is evidence enough that this measure was defeated by about 200,000 votes. MacDonald follows the dedicated activists that fought to combat virulent homophobia during the heights of the AIDS crisis. Ballot Measure 9 is prescient, a stern reminder of how far America has come in its acceptance of queer people and just how far we still have to go.

Beginning in 1935, the American Legion has organized conferences for high school juniors in 49 states. In each state, the best and brightest apply and 1,000 are brought together at the conference, with the challenge: form a government. Students are split into parties, and each party must define its platform and elect its leaders before coming together with the other party to debate the issues. Brave students rise to the challenge of leadership and run for elected office. The conference culminates with an election: one party assuming power and one student being inaugurated Governor of Boys State.

This film, directed by Amanda McBaine and Jesse Moss, follows the 2019 Texas Boys State conference. The film focuses on four boys: Ben, Rene, Stephen, and Robert, leaders in their respective parties. Watching 17-year-olds perform politics with more dexterity and cunning than actual elected officials can be jarring, but it is a fascinating exploration into the perception young people have about the political process, the importance of truth, and civic duty.

Boys State is available to stream on Apple TV.

Elections are delicate, even in the best of times. 537 Votes, directed by Billy Corben, was released in the weeks leading up to the 2020 election as a guidebook and warning for what was sure to be a close race. The film chronicles the infamous 2000 presidential election between George W. Bush and Al Gore. In an extremely close election, the deciding Electoral College votes would be Florida’s. Bush would not be declared the winner until over a month after Election Day when the Supreme Court ended a statewide recount of Florida’s votes.

As the name suggests, those 537 votes were enough to propel Bush to a victory in Florida and 271 Electoral College votes. While Gore did formally contest the election, he ultimately conceded with grace. Therein lies one of the core messages of the film, that it is both possible and okay to lose sometimes. And sometimes, to respect the sanctity of democracy and the election, one must accept losing it. The ramifications of this election can still be felt.

537 Votes is available to stream on HBO Max.

Punch 9 for Harold Washington is an example of both the power of populism and the painful reminder that advances in civil rights have been hard won, recent, and under threat. Punch 9 follows the unexpected and meteoric rise of little known congressman Harold Washington during his campaign for Mayor of Chicago in the early 1980s. Director Joe Winston follows Washington’s unexpected victory in the primary against incumbent mayor Jane Byrne and “heir apparent” Richard M. Daley, the attempts by Washington’s own Democratic Party to support his Republican opponent in the general election, the ways in which machine Democrats, fueled by racism, attempted to block his policy proposals at every turn, and the way that Washington was able to win over hearts and minds of the city of Chicago, winning reelection weeks before his untimely death in 1987.

While much of the content in this film inspires anger, bitterness, and frustration as it lays bare the stranglehold of racism on Chicago politics, the film itself avoids being bogged down in those feelings. The actions of the Chicago City Council in the 1980s is what one would expect from a Citizens Council in Alabama 40 years earlier, and the film calls out their bigotry with a boldness that would not have existed at the time. The film maintains a hopeful orientation, calling on viewers to carry on the legacy of Harold Washington and the ways that he shaped Chicago into a more diverse and welcoming city during his short tenure. A testament to both the awful and the hopeful in our political climate then and now, Punch 9 reminds us all that politics is local.

Punch 9 For Harold Washington does not yet have a streaming home. It can currently be seen only in select AMC locations across Chicago.

The oldest entry on this list, Primary follows the 1960 Wisconsin Democratic Presidential Primary between John F. Kennedy and Hubert Humphrey. The film, produced by Robert Drew, was revolutionary in the art of documentary filmmaking. For the first time, cameras and sound equipment were mobile and light enough to carry on the campaign trail, following the candidates through their day-to-day interactions. This reduction in space between camera and subject creates compelling intimacy. The film’s techniques set a standard for both documentary filmmaking and video journalism still in use today.

Beyond the film’s technical achievements, Primary reveals how little the American political landscape has changed over the past 50 years. Wisconsin is still one of the most watched political battlegrounds in the country — you only have to look at the recent fundraiser organized by The West Wing’s Bradley Whitford and Veep’s Julia Louis-Dreyfus for evidence of that. Primary provides a glimpse into what political discourse was like before the 24-hour news cycle and constant monitoring of political leaders — what it’s like when the closeness of a camera is novel.

Primary is available to stream on HBO Max or to rent from YouTube, Google Play, or Vudu.

13th, directed by Ava Duvernay, has a tagline of “From slave to criminal with one amendment.” The film explores the 13th Amendment to the United States Constitution. Many are familiar with the 13th Amendment, ratified in 1865, as the amendment that abolished slavery and involuntary servitude in the United States. The film asserts that this is an incomplete understanding, and Duvernay seeks to set the record straight by emphasizing the one stated exception to this abolition: prisons.

Duvernay examines the intersections of race, class, and gender in representation within the Prison Industrial Complex. Duvernay contends that this reality is a continuation of slavery in wolf’s clothing, that the suppression of Black people in the 150 years since the end of the Civil War through redlining, segregation, disenfranchisement, hate violence, and the war on drugs has led to indiscriminate criminalization of Black bodies, and that this criminalization forms an excuse to continue to profit on the unpaid labor of Black people. Duvernay’s documentary saw a record increase in viewership after the murder of George Floyd by Minneapolis Police in the summer of 2020, and its themes are just as prescient now as they were eight years ago.

13th is available to stream on Netflix.

Knock Down the House, directed by Rachel Lears, follows four primary races in the 2018 midterm election. Each of the documentary’s four subjects are underdog Progressives running to unseat longtime incumbents: Alexandria Ocasio-Cortez in New York, Cori Bush in Missouri, Amy Vilela in Nevada, and Paula Jean Swearengin in West Virginia. These races were significant in the Democratic backlash to the first two years of the Trump presidency.

This film is notable in that it does not simply celebrate the winning side of a particular election. In fact, three quarters of the film’s subjects go on to lose their primary races that cycle, the only exception being AOC. It’s a difficult balance to strike, leaving viewers with hope and faith in the electoral process while conceding a loss with pride. With “incumbency” feeling like a dirty word in today’s political climate, this film explores the promise and pitfalls of fresh blood. May it remind all who would skip the midterms to vote.

Knock Down the House is available to stream on Netflix.

Starting and ending with the 1992 election, rounding out this list is The War Room. In many ways, The War Room is the spiritual successor of the achievements of Primary. Directed by DA Pennebaker, one of the principal cinematographers on Primary, The War Room follows the general election win of William Jefferson Clinton over incumbent George H.W. Bush in 1992. The film draws heavily on the experiences and commentary of Clinton advisers James Carville and George Stephanopolous, beginning with the New Hampshire primary and ending with victory.

The War Room is available to stream on HBO Max.

Advocates staged a tent city in the lobby of City Hall during Mayor Lori Lightfoot's budget address on Monday, Oct. 3, 2022, calling on Chicago to provide a dedicated stream of funding to tackle the … END_OF_DOCUMENT_TOKEN_TO_BE_REPLACED

The candidates face off Dec. 6 in the final Senate contest of the 2022 midterms because neither surpassed 50% of the vote in the general election a little more than two weeks ago, which included a … END_OF_DOCUMENT_TOKEN_TO_BE_REPLACED