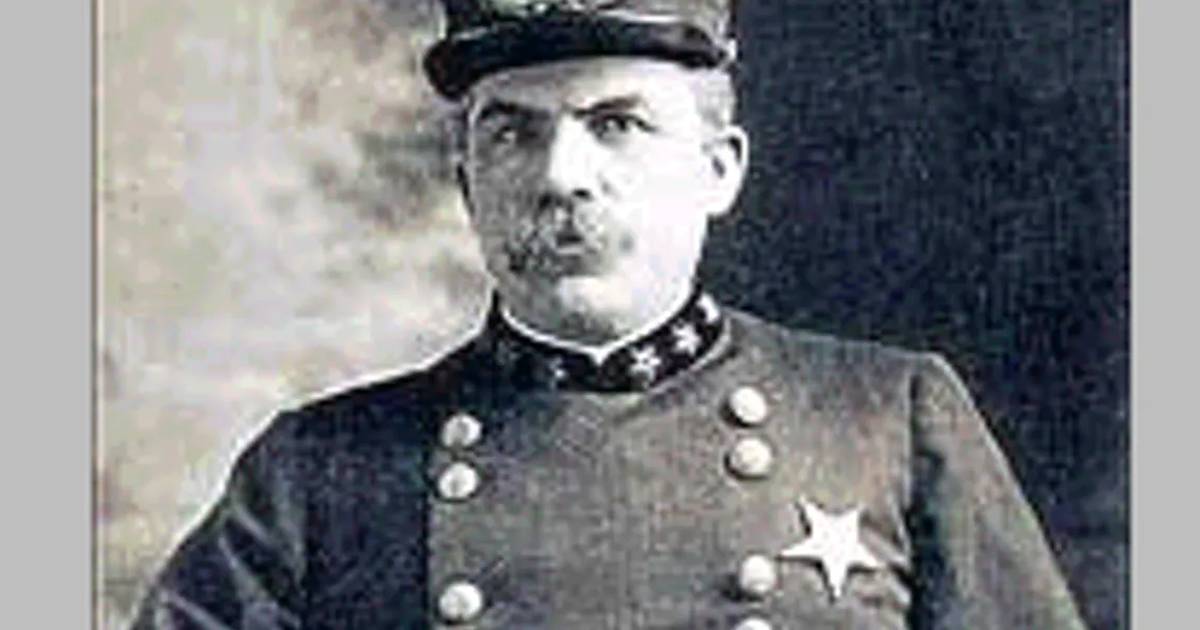 The Beat Cop, Chicago’s Chief O’Neill and the Creation of Irish Music

The Beat Cop is an analysis of the life and influence of Francis O’Neill (1848-1936). A native of Bantry, Co Cork, he left home as a young man, travelling the world as a penniless sailor but ending up retiring as Chicago chief of police. O’Neill is mainly celebrated today for his collections of Irish music, for example O’Neill’s 1001: The Dance Music of Ireland (1907), still called the bible by Irish traditional musicians.

Francis’s life story is a colourful one. For this reason, I was prompted to write a novel on his life: Chief O’Neill (Somerville Press). As you can imagine, I was interested in reading O’Malley’s new biography and analysis. The book is well researched and it was fun to revisit the O’Neill story and places: especially Tralibane, outside Bantry, where he grew up, and his years in Chicago. As with my book, there is a key text underlying O’Neill’s story, his memoirs: Chief O’Neill’s Sketchy Recollections of an Eventful Life in Chicago (Northwestern University Press). In that short work, unfortunately, Francis O’Neill conceals as much as he reveals about his life. There are nostalgic recollections of his youthful misadventures, but also glaring omissions: of the 10 children he had with his wife Anna Rogers, only four survived to adulthood. O’Malley’s The Beat Cop puts the Chief on the witness stand, questioning this account of his life and how it contrasts with the history of his time.

In the Introduction, O’Malley cuts through any romanticising of O’Neill:

Born an Irish colonial subject of Queen Victoria, O’Neill learned in the “National Schools” to see himself as a “happy English child.” The smart, bookish boy fled that colonial status for the sea and later escaped it altogether when he took the oath of citizenship to the US in 1873. But then a different kind of colonization took place, colonization by industrial life and the multitude of new ideas and technologies it offered. O’Neill patrolled Chicago as an agent of the state, part of the apparatus that organized and administered the city. […] From his office in city hall he then used techniques of the modern police force to map and colonize Irish music.

O’Malley’s goal is to explain O’Neill through the political forces of his time. He speaks of O’Neill’s “double identity, both Irish and English”. The O’Neill family in west Cork survived the Famine, asserts O’Malley, so there must have been a degree of complicity with the colonial overlords.

As an Irish person whose family has roots in west Cork, I found this part of the analysis heavy-handed. This history of the Famine is a complicated one and I imagine most Irish people would rather not find out some of the skeletons rattling around the closets of our ancestors – the ones who survived. However, to pin this specifically on O’Neill strikes me as unfair. When discussing Mary Ward, a blind singer from O’Neill’s childhood with a tendency to gossip, she is framed as a valuable informant offering “the competitive and ambitious O’Neills intelligence about their neighbours in exchange for food and shelter”. Again, this is not history but speculation, dare I say it, even fiction. In fairness to O’Malley, he does admit that “Perhaps the O’Neills were simply kind, and this judges them too harshly”. The truth is, we only care about Mary Ward because Francis was impressed with her singing and lilting of tunes.

Throughout, there is an impulse to expose these underlying flaws in Francis’s history; some of it well-founded, some better described as speculative. Francis rarely spoke directly about Irish nationalism and O’Malley takes this silence as further complicity. Again, I have to diverge here, based on personal experience. My own family moved to Chicago in the 1980s from the Ireland of hunger strikes and high unemployment. The company my father worked for, now Kerry Group, was then called North Kerry Milk Products. They quickly had to remove the “North” in the name because of the connotation with Northern Ireland. Ireland and its troubles have a long history in Chicago, with many incidents of Fenian activity which O’Malley documents. However, regarding O’Neill’s relative silence on the topic, my mind suggests a more subtle interpretation. To quote Seamus Heaney on the Troubles: “Whatever you say, say nothing”. In the same way as Kerry Group had to be careful about their “branding” in America, Francis had to be circumspect about any Irish political beliefs. I don’t see this so much as evidence of double consciousness of the oppressed as shrewdness on Francis’s behalf.

I’ll lay my cards on the table here. Francis O’Neill is a hero to me. I identify with his pangs of homesickness from leaving Ireland at 13 to arrive in a sprawling city like Chicago. I too turned to Irish music as refuge, even though it was as much Christy Moore and the Pogues as it was tunes I heard in pubs on the south side. When I found out more about Francis, initially from O’Neill’s 1001 and later through his Sketchy Recollections, I realized I wanted to tell that story through telling his story. I also knew how tight-knit the Irish community in Chicago was and I wanted to celebrate one of its famous members. But as The Beat Cop points out, all heroes have their flaws. There is no doubt that O’Neill relied upon patronage to rise to chief. He also managed to avoid and expose some of the more unseemly machinations of Chicago politics, something that is a credit to him which even The Beat Cop acknowledges.

The key aspect of O’Neill I feel The Beat Cop misses is his love of Irish music. Not emphasising this, to my mind, does a disservice to understanding Francis, who always described himself as “music mad”. Music was a solace for missing home as well as a means to connect with the community which he had to police. I don’t really buy the comparison of collecting tunes with a tough cop badgering witnesses. Perhaps in some cases there were aspects of that but by wholly politicising the story, the underlying obsession with music is neglected. He was so singular in his pursuit that The Beat Cop describes O’Neill as “emotionally obtuse”, what we might today classify as “on the spectrum of autism”.

To my mind, this is the worst example of too-convenient psychologising. As I pointed out above, O’Neill’s story has a very personal connection to me on a number of levels. Here is another one. I have a 15-year-old son who is autistic. I have learned so much about myself and what is labelled as autism from him. I have also learned to be very careful in applying that label to others, just because they are a little eccentric by current standards. Autism and the attempt to understand it was the main reason I wrote my second novel: Poor Farm (Moose House Press). Set in rural Nova Scotia in the late 19th century, instead of imagining whether real historical people were autistic, it focuses on what the life of my son would have been like if he were born in Francis’s time. The story of historical treatment of people with autism is not told enough and rarely told with empathy. I particularly dislike it as an easy explanation for somebody not being emotionally connected. If anything, people on the autistic spectrum are often overwhelmed by emotions and, to the neuro-typical, appear disconnected. They are not obtuse or stunted.

When it comes to telling Francis O’Neill’s story, I certainly won’t claim to be perfect. I invented one character as a dramatic foil and embellished certain events to make the narrative more compelling. I can understand O’Malley’s desire to fill in the gaps in Francis’s story. However, I was writing historical fiction and laid out a big disclaimer at the start of the work. I appreciate O’Malley’s fine research into O’Neill’s life and, overall, am impressed by it. However, be warned that The Beat Cop occasionally strays from history into speculation. Francis O’Neill was no saint and it is worthwhile examining his flaws. However, a good cop (and historian) would “stick to the facts”, otherwise they are just telling a story.