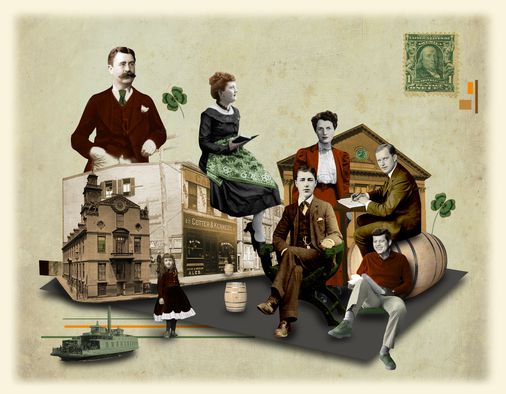 Today Bridget Kennedy is the forgotten Kennedy but, as Neal Thompson points out in “The First Kennedys,” a compelling multi-generation biography of the family’s early years in the United States, she is the indispensable Kennedy, an indomitable widow and maid-turned-grocer who, in an East Boston tenement, set in motion a political dynasty that rivals, and arguably surpasses, the Adamses as the foremost family in Massachusetts history and the Bushes as the preeminent family in our national history.

Thompson makes it clear that the Kennedy ascendancy in the United States didn’t start with a waif fleeing potato-famine privation; the young Bridget Murphy left Ireland for America out of an irrepressible yearning for adventure, a craving, as he put it “to leave the safety of habit and family and fling herself among strangers toward a strange new land.” But — and here the Bridget story becomes the American story, and the enduring Boston story, too — life was hard. There was crime, there was poor housing, there was unremitting poverty, there were scammers and hucksters and worse. There also was promise in America for the Irish — as long as they left parochial and patriarchal Boston.

But she stayed put to move up. She encountered, and then married, a lad named Patrick Kennedy, a barrel maker with whom she set in motion a process that transformed the family from a faceless unit into a powerful unit that in time would carry the (sometimes forbidding, sometimes romantic, always influential) label of “The Kennedys.”

The road wasn’t smooth. She lost a baby — his name was John F. Kennedy — to cholera infantum only to find that under Boston law Catholics were barred from burial in Boston. The couple lived in Massachusetts when the power structure, top to bottom — the governor of the Commonwealth, the mayor of Boston, the entire state senate and most of the state House — was aligned with the Know Nothings, who above all thought they knew one thing: Immigrants, especially Boston’s Irish, were uncouth, uneducated, unhealthy, and above all unwelcome.

In a chronicle that ranks with the richly evocative work of Doris Kearns Goodwin (“The Fitzgeralds and the Kennedys,” 1985) and Thomas H. O’Connor (“The Boston Irish,” 1997), Thompson chronicles the lives of the early Kennedys and their experience of how “the city on the hill, while still a beacon of hope, was also becoming a city of hate,” and he explains that “the descendants of the original European refugees now wanted to shut America’s doors, to wall off their stolen land.” One of the perpetrators of this notion turns out to have been the Unitarian minister Theodore Parker, celebrated in history, quoted favorably by Abraham Lincoln and Martin Luther King; he described Boston’s Irish as “ignorant…idle, thriftless, poor, intemperate and barbarian.”

Hardship came in many forms, particularly economic distress and disease. Both hit the young Kennedy family hard. Bridget’s husband, Patrick, died of consumption, too poor to go to the hospital, not that any of them would admit an Irish patient. Suddenly Bridget was a single mother of four, “surrounded by the sick and the poor, living amid those who still feared and hated her kind, blamed her for her city’s woes, and ridiculed her religion.” Her net worth was a mere $75.

But her trajectory was unmistakably upward, from maid to hotel employee and then to washing the hair of rich women at Jordan Marsh and finally to her own grocery on Maverick Square. This country may have had — it still has — nightmarish aspects to it, but it was — it may still be — the breeding ground of an intoxicating American dream. “She was largely on her own now, or at least on her way,” Thompson writes, telling us that “her boldness reflected a changing city, in which Irish women and men were on a spirited ascent.”

And yet Bridget’s boy, known as P.J. Kennedy, ended up at the House of Reformation on Deer Island, not an especially promising launching pad for a dynasty that would send multiple members to the House of Representatives. But P.J. himself moved from inmate to longshoreman to barkeep, eventually drifting into ward politics and winning a seat in the General Court, where he concentrated on ferries (important to his East Boston constituents before the age of bridges and tunnels into the center city) and liquor (where, in large measure out of self-interest, he fought anti-saloon measures).

But his greatest role was as father and mentor to Joseph P. Kennedy, and there the story acquires a new complexity. P.J. Kennedy had frosty relationships with the leading Irish figures of the time, including Martin Lomasney (hardly remembered today but a powerful lawmaker and political boss in late 19th- and early 20th-century Irish Boston) and John F. Fitzgerald (a Boston mayor whose daughter would marry his son). And that is where the story becomes a far different narrative, where the forgotten Kennedys give way to the familiar Kennedys. But we cannot understand that passage, or our own time, without considering the first Kennedys.

David M. Shribman, for a decade the Globe’s Washington bureau chief, is a nationally syndicated columnist.

The First Kennedys: The Humble Roots of an American Dynasty

SENECA, Ill. — 15 people were injured in a boat fire in Seneca on Saturday afternoon, with one person suffering serious injuries, police said. According to Illinois State Police, troopers responded … END_OF_DOCUMENT_TOKEN_TO_BE_REPLACED

Vallas was CEO of Chicago Public Schools from 1995 to 2001 and served as city budget director under former Mayor Richard M. Daley. More recently, he worked as an unpaid consultant to the Fraternal … END_OF_DOCUMENT_TOKEN_TO_BE_REPLACED

As we continue our look at the candidates running for office this summer, we’re turning our eye toward Illinois’ 2nd Congressional District, where incumbent Rep. Robin Kelly is hoping to be elected to … END_OF_DOCUMENT_TOKEN_TO_BE_REPLACED