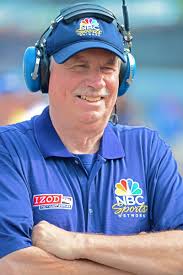 Robin Miller was happiest writing and talking about racing.

Robin Miller was to Indianapolis Sports as Mike Royko was to Chicago politics.  If you didn’t read his column in the 1980s and 1990s, you couldn’t have a sports related conversation in Indy.

The hook was that Robin did not respect authority – not in sports and not in media.  He was highly critical of Indiana Basketball coach Bob Knight, Indianapolis Motor Speedway owner Tony  George, and a variety of bosses he maligned throughout the years.

Somehow, that included me.  I was the assistant program director at WIBC when Robin was hired to co-host a sports talk show with Jim Barbar on the station.  The hire was a no-brainer.  Robin was funny and irreverent, and had an easy rapport with Jim.

Robin was convinced I was part of the enemy cartel who could only hamper his success.  There were restrictions the Star enforced as Robin was hired – he could only work three nights per week and was unable to endorse products.  That meant the show would be inconsistent and less profitable than it would have been otherwise.

It was worth the sacrifices to have Robin a part of the station.  He was THE polarizing figure in Indy sports media, and if a professional partnership with him required a couple of allowances, that was fine.

And it was fine until Robin took the side of CART in the split between that open wheel racing series and George’s Indy Racing League.  Without getting lost in the weeds about the feud between Roger Penske’s CART and George, many people locally viewed the split as an attack on the Indianapolis 500, and Miller aligning with CART was heresy.

As a result of his well-known and poorly received assessment of the state of open wheel racing, Robin was removed from WIBC.  Robin was allowed to continue on the show for the following two weeks, and on the last night, he went after me with a vengeance.  I’ve been insulted in many ways by many people, but this level of vitriol was peculiar.  Somehow, Robin got the idea that I was responsible for his ouster.  But as assistant program director, I wielded no such authority.

Because of his diatribe, Robin was less than my favorite human being for a significant period of time.  Every once in awhile, I would come across a former colleague of Robin’s from the Star, and I would ask for their thoughts about him.  Robin didn’t seem like a bad guy, so I wanted to find out how his peers perceived him.  To a man, they all swore by him.

Everyone I could find who worked with Robin showered him with praise and most had anecdotes of generosity that painted Robin as not just a good person, but a friend.

I never spoke about any of this with Robin, because what the hell would the point be of that?  I don’t need closure for a dispute I never really had with him, and he was clearly indifferent (at best) about me, so I didn’t approach him during the many instances our paths crossed at the Indianapolis Motor Speedway.  Once, while I waited for an elevator, he said hello.  I said hello back.  I was fairly certain he hadn’t recognized me prior to the greeting.

The point of the whole thing is that I spoke to a wide variety of Robin’s former co-workers and invited them to share their thoughts, and they glowed when discussing him – even the hardened and crusty old ink-stained wretches.

Never say anything about the departed you wouldn’t say to their face, is a well-known rule about honoring those who pass.  I had no relationship with Robin when he was here, but I have heard so many first hand stories from many about how positive an influence he was upon the Indianapolis Star’s sports department, I feel compelled to share that on the day we learn of his death.

Those are tough to win over folks, and they will miss Robin a great deal.

CHICAGO (CBS) — We first told you about Sally’s Nuts one year ago; a beloved mother-daughter business that took off during the pandemic.It turns out they’re doing so well, they’re finally​ having … END_OF_DOCUMENT_TOKEN_TO_BE_REPLACED

“In this environment, having certainty of who your tenants are and the cash flow of those tenants is attractive. We believe in Restoration Hardware as a tenant,” said Alexi Panagiotakopoulos, … END_OF_DOCUMENT_TOKEN_TO_BE_REPLACED