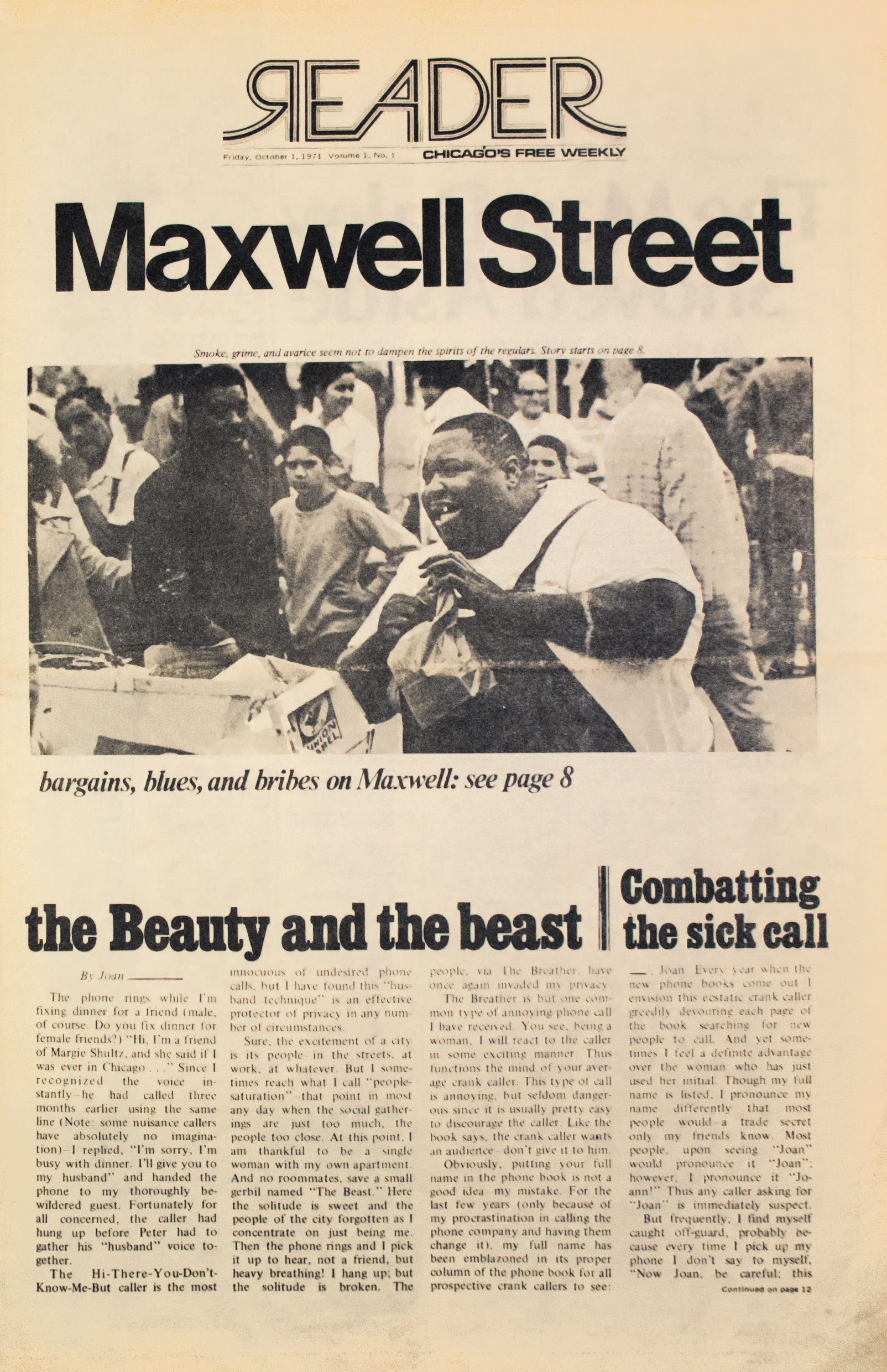 The Chicago Reader, a fearless, innovative, and nationally respected media voice in Chicago since 1971, is celebrating its 50th anniversary with a variety of exhibitions, events, and projects.

The Chicago Reader’s first issue was October 1, 1971. It is believed to be the nation’s first free newsweekly. From its days as the city’s main “alternative” publication, to its current biweekly format with daily online postings, the Chicago Reader has stayed true to its roots, covering culture in all its forms, and uncovering corruption in government and other institutions.

In 2020, the Chicago Reader received 501(c)(3) nonprofit status from the IRS for its Reader Institute for Community Journalism, and the full conversion to nonprofit is expected before the end of this year.

The Reader has been marking its golden anniversary with online and print-related content, including a deep daily Archive Dive. That will continue with two special anniversary issues, October 14 and October 28, with 60,000 copies featuring the origin story and other articles and content focused on the past 50 years of award-winning work.

The Reader was founded by four college friends: Bob McCamant, Bob Roth, Tom Yoder, and Tom Rehwaldt. They sold the paper in 2007 to Creative Loafing, and it was sold several times since, including to the Chicago Sun-Times. In 2018, the Sun-Times sold the Reader to Elizie Higginbottom and Leonard C. Goodman, who took it independent once again, before approving its conversion to a nonprofit. The four founders returned to the Reader office for the first time in years for a 50th anniversary photo shoot, where they met current co-publishers Tracy Baim and Karen Hawkins.

“We continue to be honored to helm this legendary Chicago newspaper,” Baim and Hawkins said. “And we are very happy to start the 50th anniversary celebrations October 1 with 50 days of Reader giving. This has not been an easy journey to nonprofit status during a pandemic, but we are grateful to our staff, freelancers, supporters, readers and advertisers for staying the course.”

CHICAGO — The City Council on Monday delayed a vote on Mayor Lightfoot’s curfew change — but a group of young residents are urging members to vote no. The young adults are part of the racial … END_OF_DOCUMENT_TOKEN_TO_BE_REPLACED

The fire at the former Pheasant Run Resort, 4051 E. Main St., broke out Saturday afternoon, sending huge plumes of smoke into the sky surrounding the closed resort and drawing dozens of onlookers who … END_OF_DOCUMENT_TOKEN_TO_BE_REPLACED

As the 2022 political season gets into full swing, one of the most intriguing candidates for elected office is Herschel Walker. The star running back with the University of Georgia and Dallas Cowboys … END_OF_DOCUMENT_TOKEN_TO_BE_REPLACED