Retiring Ald. Susan Sadlowski Garza (10th) said Tuesday she won’t miss “people who use you and throw you away like a piece of paper towel” — and she’s “not just” referring to Mayor Lori Lightfoot.

“And that’s one thing I’m not gonna miss at all. The people that use you and throw you away like a piece of paper towel or something. That’s not just in regard to the mayor. I’m talking about people that I’ve met along the way or people that I’ve known for a long time. There’s a lot of people that just — they use ya and that’s it.”

Sadlowski Garza declined to name any other names.

Garza said she “spoke my truth” when she unloaded on Lightfoot in late February and told podcaster and friend Ben Joravsky there was no way she would support the mayor’s re-election bid. But “the way I did it was wrong,” she said, and if she had it to do over again, she “would have done it in private.”

At the time, Garza said she was “sick and tired of being thrown under the bus and having the bus roll over my head. That’s what she’s done to me.”

She also took aim at Lightfoot’s Achilles heel: her inability to play well with others.

“I have never met anybody who has managed to p— off every single person they come in contact with. Police, fire, teachers, aldermen, businesses, manufacturing.”

On Tuesday, Garza reflected on that record and the now-frayed political partnership that made it possible.

“I would be naïve to say that it would have happened without her support. We changed the lives of hundreds of thousands of people across the city of Chicago and workers. I’m really proud of that,” she said.

Even as she bemoaned the one-way street that is Chicago politics, Sadlowski Garza said that’s not why she’s calling it quits.

It has more to do with the soul-searching she did after her 30-year-old goddaughter, Amanda Alvarez-Calo, was shot and killed by her estranged husband, a state trooper who then turned the gun on himself.

“In January, when Amanda was murdered, it really shook me to the core,” she said.

“I have two granddaughters. … [Husband] Raul retired last month after 40 years of being an ironworker. I just want to spend time with my family. Life is too short, you know? … I’m taking care of Sue Garza for the first time in 32 years. I don’t have any advice for anyone.”

Sadlowski Garza is one of three members of Lightfoot’s leadership team to signal a break with the mayor. The other two are Aviation Committee Chair Matt O’Shea (19th), who gave Lightfoot a pivotal endorsement in the 2019 mayoral run-off, and retiring Zoning Committee Chair Tom Tunney (44th), now pondering running against Lightfoot.

Pressed to explain the split and the parade of veterans leaving the Council, Sadlowski Garza said: “It’s been a hard three-and-a-half years. Everybody in City Council has been through a lot. Could things have been done differently? Yeah. But I don’t have the bandwidth to try and figure it out. I’m actually done trying to figure all that out.” 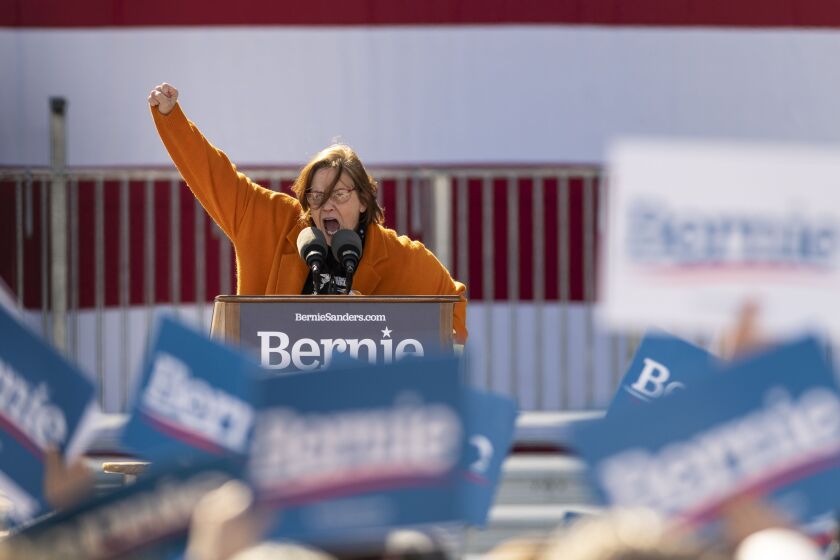 Ald. Sue Sadlowski Garza speaks to thousands gathered at a March 2020 rally for Sen. Bernie Sanders, then a candidate for president, in Grant Park.

A former school counselor and area vice-president of the Chicago Teachers Union, Sadlowski Garza was asked if she plans to endorse County Commissioner Brandon Johnson if he runs for mayor.

Johnson, a CTU organizer, informed the State Board of Elections on Tuesday he would use his campaign committee to explore a race for mayor against Lightfoot.

Lightfoot has blamed her contentious relationship with the Council on her refusal to “buy votes.”

On Tuesday, the mayor said she has no intention of altering her style if she wins a second term, when she could inherit a more independent Council.

“I’m 60 years old. I’m not gonna change who I am. And I definitely…have and will continue to push people, sometimes out of their comfort zone because that’s what our residents are demanding of us. The status quo that I inherited — it didn’t work for people. It failed most of our residents,” she said.

“I don’t govern by fiat. I govern with my colleagues in the City Council. We’ve done tremendous things.”