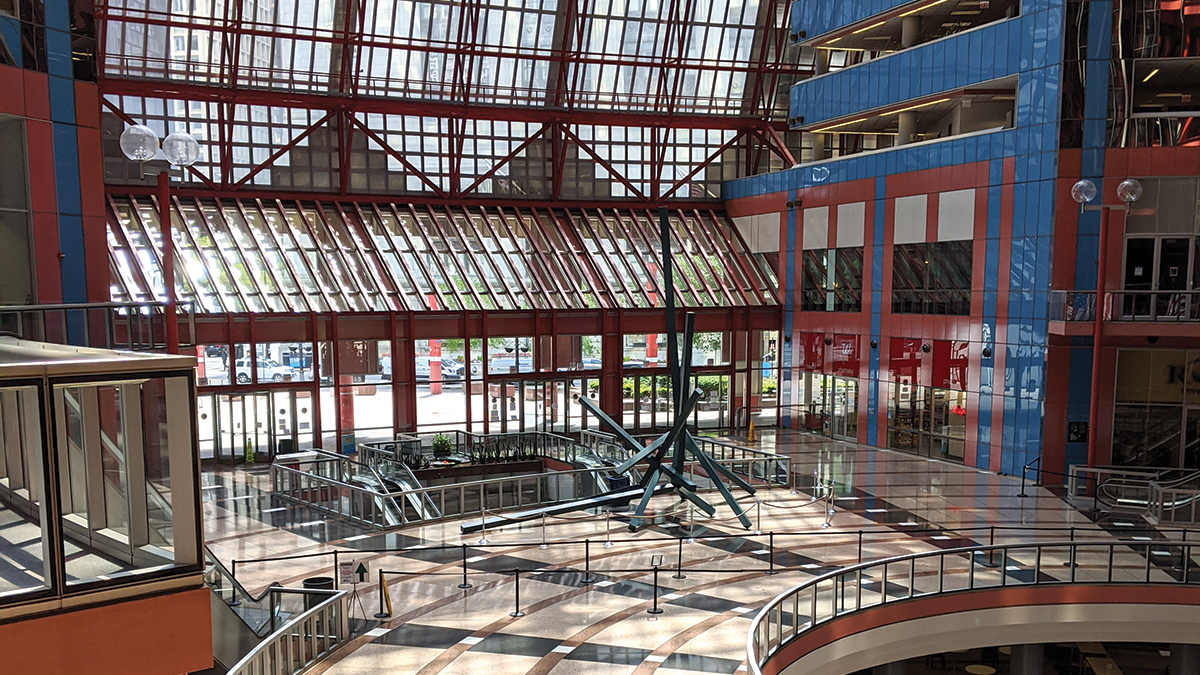 Trudging east on Randolph toward the Siskel Center on a gloomy, COVID-depopulated early evening last week, I heard something that stopped me in my tracks:

I turned to see the source. A boy of ten or so was pulling at his mother’s arm as they walked south on Clark. With his other hand, he was pointing across the street at the massive, glassy, otherworldly hump of the James R. Thompson Center.

Even as it stands now—dilapidated and mostly emptied, its spectacular, 17-story atrium off-limits to the public after 6 PM and on weekends—the Thompson Center can ignite the attention of a passing child.

I was on my way to a screening of four short films on architecture by journalist and documentarian Nathan Eddy, including his 2017 Thompson Center paean, Starship Chicago. That film is more relevant than ever as we await the announcement of the building’s fate.

Governor J.B. Pritzker put the futuristic 36-year-old structure, which stands on a full city block, up for sale and possible demolition last spring. In its request for proposals, the state noted that the building lacks historic landmark designation and claimed that it’s not currently eligible for government preservation incentives.

After extending the bidding deadline from August to October, and getting the city to pass a zoning density change that allows the construction of a massive tower on the site, the state said it has received all of two bids from potential buyers. The “winner” is to be announced this month.

Names of the bidders and details of their proposals have not been released, and won’t be until then, when it’s a done deal. Do they plan to repurpose the building or to demolish it? We don’t have a clue.

The Illinois Department of Central Management Services, which is handling the sale, says state law forbids the disclosure of buyers, prices, and plans until after the contract is awarded.

Which law is that? Public Act 100-1184, written specifically for this sale, and effective as of April 5, 2019. According to this law, no appraisal is necessary, and the sale (after a one-year pandemic extension) is to be completed by April 5, 2022.

“It feels as though the process is very nonpublic for a public body,” says Preservation Chicago executive director Ward Miller. “And it’s really unfortunate that they would even consider selling such a valuable public asset, part of a governmental center in the Loop. It smacks of old-style Chicago politics.”

And then there’s the timing: we’re in the midst of a pandemic-instigated, Internet-enabled, office market meltdown.

Meanwhile, in January, the state paid $73 million for a much smaller, less distinctive building in the West Loop, and began moving employees from the Thompson Center there.

The stated reason for dumping the Center is the cost of repairs, mostly incurred because the state cheaped out initially on construction materials and then routinely failed to do maintenance. Estimates of how much it would cost to fix have ballooned from about $100 million in 2015, to $325 million in 2017, and a recent prediction by Pritzker’s staff that it could be $525 million by 2026.

“Many of us feel it could be updated and restored at a lower number,” Miller says. “This is the building that put Helmut Jahn on the world stage.”

Eddy’s latest documentary, Helmut Jahn: In a Flash, was also on the Siskel Center program that night, its premiere screening. A condensed biography in the architect‘s own words, it mostly consists of 2016 interview footage that wasn’t used in Starship Chicago. Eddy, who’s based in Berlin, told me that he happened to be here last May, arriving the day after Jahn was killed in a bicycle/auto accident. “I thought immediately, you need to take that footage and turn it into a single-person documentary,” he recalled.

The film opens with Jahn’s voice. “It’s very hard to make a statement which goes beyond the ordinary,” he says. A flash-card review of his many, never ordinary, local projects follows, coming to rest in a Chicago skyline that features the flat plane of the McCormick Place Lakeside Center in the foreground—another iconic project that, in his earliest Chicago years, Jahn  worked on. After that, Eddy puts the viewer opposite Jahn at his desk, for a 20-minute conversation that amounts to an illustrated overview of his prolific, brash, and innovative career. “When I got here, in the 60s,” he begins, “Chicago was the center of the architectural world . . .”

While the Thompson Center’s fate hangs in the balance, you can take that seat opposite Jahn yourself: through December 19, MAS Context and Goethe-Institut Chicago are hosting a free digital screening of Helmut Jahn: In a Flash at mascontext.com.

Here is a new way you can watch local news, 24 hours a day, seven days a week – for free!  NBC 5 has launched NBC Chicago News on Peacock. Here, you will see around-the-clock local news coverage. … END_OF_DOCUMENT_TOKEN_TO_BE_REPLACED

Proper Rate, the joint venture by Guaranteed Rate and @properties, has named Rich Honquest as a new vice president of mortgage lending. In the position, Honquest will be originating loans in the … END_OF_DOCUMENT_TOKEN_TO_BE_REPLACED

Tuition for out-of-state and international freshmen will increase by 2.5% in Urbana-Champaign, 1.8% in Chicago and 1.5% in Springfield. Tuition at U of I was previously frozen from 2015-2019 and in … END_OF_DOCUMENT_TOKEN_TO_BE_REPLACED