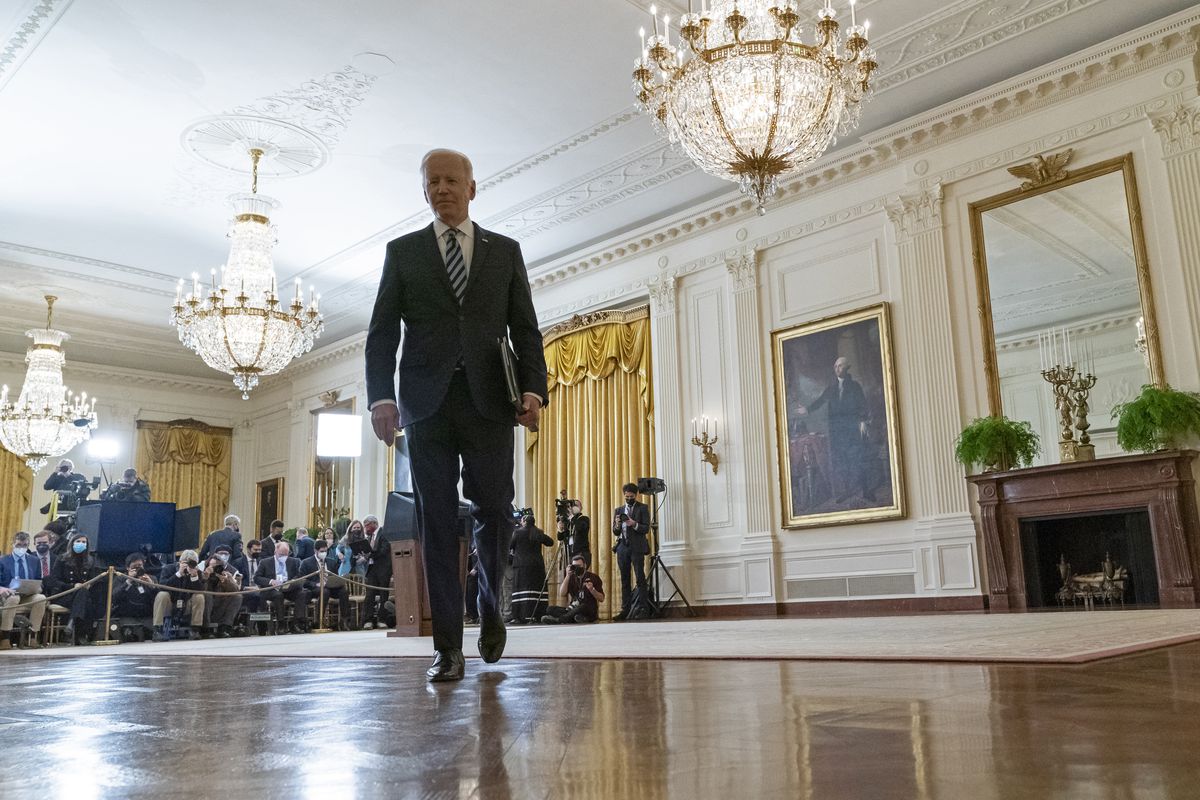 Russia’s invasion of Ukraine could raise gas prices by 50 cents a gallon, infuriating an already angry electorate and making a “hard hand” for Democrats even worse in this year’s elections.

Voters are fed up with rising crime, two years of pandemic restrictions that have kept kids learning at home and, more recently, being squeezed by inflation.

“It’s a huge political problem for President Biden because we’re already feeling the effects of inflation related to the pandemic. And now on top of this, we’re gonna see gas prices go up, perhaps as much as 50 cents on the gallon and other items go up in cost,” Axelrod said.

“It’s important for the president to tell people why this is so important, because they’re gonna feel the pain. … As [Winston] Churchill did in Britain, he needs to explain to people why that sacrifice is necessary. … The president needs to sell this to the American people. They need to understand that these sacrifices are important to our interests and not just our values.”

People try to get onto buses to leave Kyiv, Ukraine, on Feb. 24, as the country was attacked by Russia.Emilio Morenatti/Associated Press

Even before Russia’s invasion of Ukraine, the prognosis for Democrats in the fall was “pretty grim,” Axelrod said.

If Biden’s approval rating is still sitting at 41% or worse in November, Axelrod said: “It’s going to be a trouncing for Democrats.”

Axelrod’s advice to Biden is to play to his greatest strengths: “empathy and identification with everyday people.”

Resist the temptation to take a victory lap for his formidable first-year accomplishments during Monday’s State of the Union address. The public is no mood to hear it.

“We’ve been through hell. He needs to speak to that — not in a Jimmy Carter-esque way. Not to talk about malaise. But just to recognize this has been a really hard time. … Parents have gone through hell with their school-aged children. And there’s an awful lot of discontent about how that has unfolded,” Axelrod said.

President Joe Biden departs after speaking about the Russian invasion of Ukraine in the East Room of the White House on Thursday.Associated Press

“He needs to identify with the struggle. … He needs to celebrate the resilience of the American people and resist looking for a whole lot of atta-boys and pats on the back for the stuff that he’s done, which is substantial.”

Democratic control of the U.S. House and Senate isn’t the only thing in jeopardy. So are incumbents up and down the ballot — including Illinois’ first-term incumbent Democratic Gov. J.B. Pritzker, Axelrod said.

That’s believed to be just a down payment for Griffin, who says he’s “all in” to oust Pritzker after succeeding in blocking Pritzker’s proposed constitutional amendment that would have implemented a graduated income tax in Illinois.

“Given the nature of the year and the resources that are massed against him and some of the scars of having to lead a state through the pandemic, he has to be seriously focused…This is not gonna be a walk in the park for him,” Axelrod said of Pritzker.

The strong headwinds for incumbent politicians also will make it more difficult for Mayor Lori Lightfoot, according to Axelrod, whose close friend and basketball buddy Arne Duncan is poised to challenge Lightfoot.

Duncan’s strengths are Lightfoot’s weaknesses — fighting crime and playing well with others. He’s a “pass-first guy” — even on the basketball court, Axelrod said.

“One of his selling points would be that he is a consensus-builder. He is someone who knows how to bring people together. That’s part of being an athlete. He knows how to build teams,” Axelrod said.

Duncan “could have cashed in” after serving as U.S. education secretary under Obama, Axelrod said. Instead, he “has devoted most of his time to stop the killing on the South and West Sides,” Axelrod said.

“Public safety is paramount. … There’s a lot of discontent right now. There’s a big desire for change out there.”

She was elected, in part, because she was a former federal prosecutor.

“She wasn’t part of the political class. That was appealing to people. But governing — running a city — is a different skill set. It requires the ability to build consensus and work with people — even people with whom you have disputes over others issues,” Axelrod said.

Polls done for other politicians have recently shown Lightfoot’s approval rate in the 30% range, roughly 10 percentage points lower than Rahm Emanuel’s ratings when he abandoned plans to seek a third term.

On Thursday, Axelrod was asked whether he is convinced Lightfoot will seek a second term — and whether she should.

“The first question she’s gonna have to ask herself is, does she want the job for another four years. She doesn’t always seem terribly joyful in her work,” Axelrod said.

“It’s an uphill battle for her. All polling reflects that. She’s a very pugnacious person. She’s a relentless person. She may disregard that and take her chances. But the reality is she’s gonna face a tough battle.”

Decades ago, Axelrod helped to elect and re-elect Richard M. Daley as mayor of Chicago.

Axelrod was asked if Thompson’s conviction marked the end of the Daley era in Chicago politics and the widespread assumption that a member of the younger generation of Daleys would someday step forward to reclaim the political throne at City Hall.

“If your family has been in the limelight, the spotlight for that long, there’s a lot of disincentive for the next generation to want to participate in the process,” Axelrod said.

“Bill made an attempt [in 2019]. The timing of that was not good for him. And I just don’t see that. Even before this conviction, I think the Daley era is part of history — an extraordinary part of Chicago history. And I think it’s over.”

CHICAGO — Former Ukrainian troops are visiting Chicago to pay tribute to their brothers-in-arms this Memorial Day Weekend. Ukrainian veterans who fought in places like the Donbas region and the … END_OF_DOCUMENT_TOKEN_TO_BE_REPLACED

Hart was promoted to president from general counsel in 2020, but the CARES Act compensation limits were based on 2019 pay. His total compensation last year was estimated at $3.5 million, mostly … END_OF_DOCUMENT_TOKEN_TO_BE_REPLACED

After an often-contentious floor debate, the Chicago City Council has passed a new weekend curfew for the city’s residents, moving it back from 11 p.m. to 10 p.m. on weekends. The new ordinance will … END_OF_DOCUMENT_TOKEN_TO_BE_REPLACED