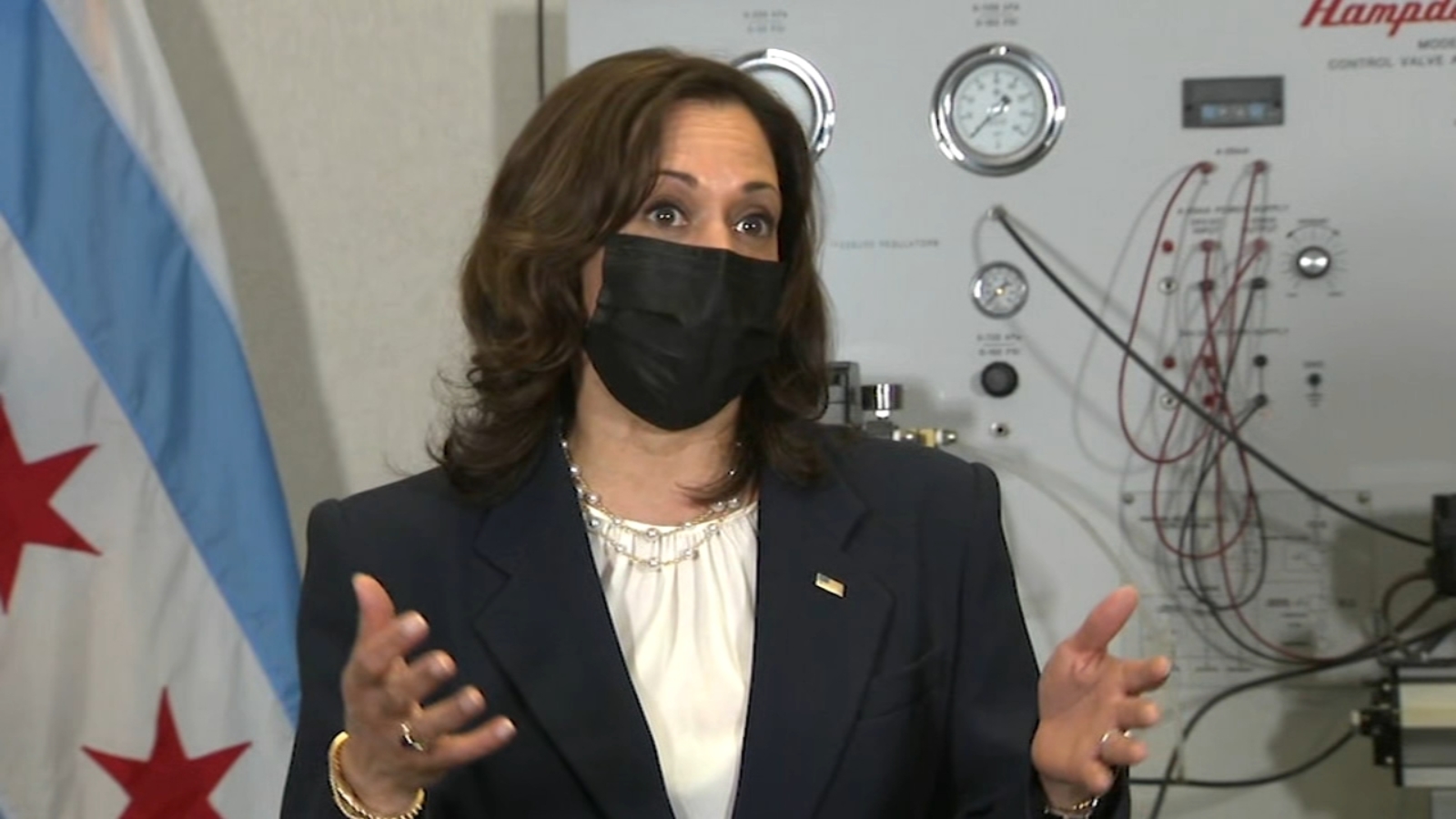 It came on the same day President Joe Biden announced that everyone 16 and older will be eligible to get vaccinated starting April 19, moving up his deadline by two weeks.

Harris arrived at Midway Airport Tuesday morning and visited a union hall in Chinatown that is operating as a vaccine clinic. Chicago Mayor Lori Lightfoot extended the invitation last week.

Harris said she was here to thank union members for doing their part in getting vaccinated, but also to ask them to be ambassadors to family, friends and co-workers who have not gotten their shots and may be hesitant.

“Please help us to tell your friends and your family members and your co-workers that when it’s their time to get vaccinated, remind people of their power to do something that will save their lives,” Harris told the crowd. “The people who carry the most weight are our peers, the people we respect. So I’m here to ask you to do a little bit more and help us, so we can truly get back up on our feet.”

Harris toured the union-run vaccination clinic, praising the effort Chicago is making in getting people vaccinated. She talked with those preparing the shots and spoke briefly with a high-rise window washer who was there to get his shot.

“People understand that to get vaccinated is about saving your life,” Harris said. “It’s about saving life and your family and your community. And so you saw what people are doing, they are coming in. It’s a quick process and it will save your life.”

“Your administration is committed to equity, so why is Chicago not getting more vaccine?” Harris was asked.

“Oh but Chicago is getting more vaccine,” Harris replied, despite Mayor Lori Lightfoot’s previous complaints that the city was not getting enough vaccine.

“Well we are sending vaccines to the state as we have done and also, as you may know, the president this morning announced that we’re also sending more resources to each of the states,” Harris said.

The CDC is sending more than $90 million to the state and nearly $34 million to Chicago to increase access to the vaccine.

“I will tell you that we are very excited, we announced today that 150 million shots have gone out,” Harris said.

The vice president side-stepped the controversial idea of vaccine passports.

“You know, I think what we want to do most of all make sure is that everybody is vaccinated and that’s where I’m focused,” she said.

Mayor Lightfoot, who was among the dignitaries with the vice president, put aside frustrations over vaccine supply.

“Vice President Harris, as you all know, has been a champion in making sure that we get the nation vaccinated. There’s more work to do but tremendous progress since this team was inaugurated,” Lightfoot said. “The summer that we hoped for, the reunions that we love, just to be able to see our families and hold them tight, all of that depends on us getting vaccinated.”

Harris disagreed with states like Indiana, where a mask mandate was lifted Tuesday.

“Wearing a mask will save your life and the life of people around you and it is just a smart thing to do,” Harris said.

The vice president echoed a familiar theme of President Biden, saying that by getting vaccinated, people will help the country build back better.

CHICAGO — The City Council on Monday delayed a vote on Mayor Lightfoot’s curfew change — but a group of young residents are urging members to vote no. The young adults are part of the racial … END_OF_DOCUMENT_TOKEN_TO_BE_REPLACED

The fire at the former Pheasant Run Resort, 4051 E. Main St., broke out Saturday afternoon, sending huge plumes of smoke into the sky surrounding the closed resort and drawing dozens of onlookers who … END_OF_DOCUMENT_TOKEN_TO_BE_REPLACED

As the 2022 political season gets into full swing, one of the most intriguing candidates for elected office is Herschel Walker. The star running back with the University of Georgia and Dallas Cowboys … END_OF_DOCUMENT_TOKEN_TO_BE_REPLACED