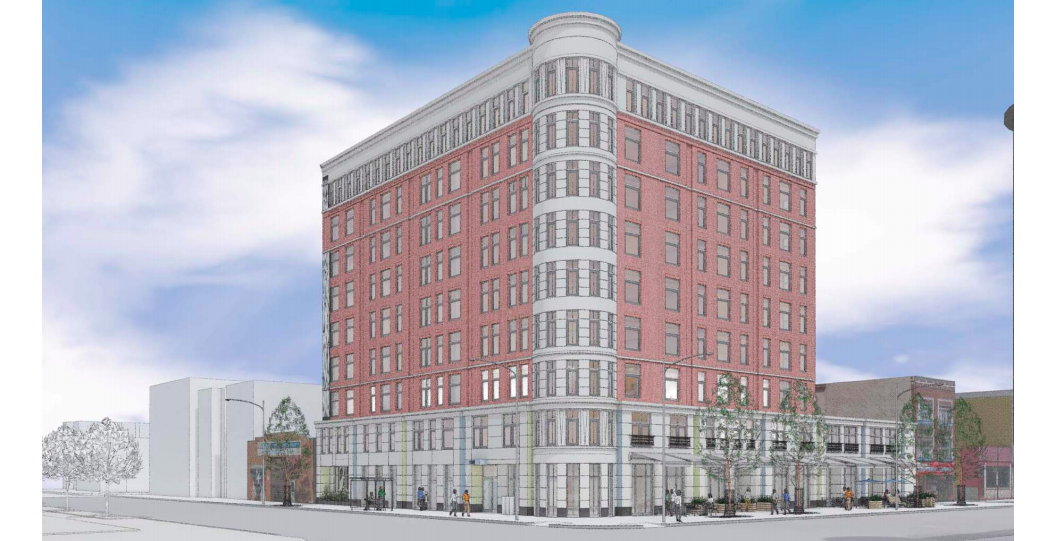 Despite concerns from some commissioners that the architectural design of the proposed nine-story, 64-unit, mixed-use affordable housing building at 1203 N. California Ave. is not “iconic” enough, the Chicago Plan Commission advanced the proposal on Thursday during its final meeting of the year.

The proposed development from Hispanic Housing Development Corporation would bring much-needed affordable housing to Humboldt Park as residents are getting pushed out due to rising home prices and gentrification, Ald. Roberto Maldonado (26th) told commissioners.

Hispanic Housing is proposing to build 40 three-bedroom units, 15 two-bedroom units and nine one-bedroom units, according to a presentation from the Chicago Department of Planning and Development. Apartments would be affordable to households making between 30 percent and 60 percent of the Area Median Income.

The development would also include 2,500 square feet of commercial space, 19 parking spaces and 49 bike parking spaces. Additionally, Hispanic Housing’s proposal includes a second-floor roof terrace with garden plots. The developer is working with artist Antonio Beniquez — who created the “Humboldt” mural located adjacent to the proposed site — on a new mural on the proposed building.

Still, some commissioners were not satisfied with the building’s exterior design, calling it “safe” when it should be “iconic” with its location on a prominent corner in “Puerto Rico Town,” which was this year recognized as an official cultural district by the state of Illinois.

“This could have gone in any suburban Chicagoland corner,” said Comm. Laura Flores, adding that the “building doesn’t honor the rich culture that it’s supposed to showcase.”

Flores said she works on affordable housing developments and understands the challenges with financing, applications and deadlines, “but if we do it right, we can have a good end product.”

“As an architect, I just cannot vote ‘yes’ because of what I know and my personal experience,” Flores said before voting against the proposal. Comm. Linda Searl was the only other “no” vote on the housing development.

Maurice Cox, commissioner of the city’s Department of Planning and Development, called the proposed development a “victory” for affordable housing but “a failure for architecture in Chicago.”

But advocates of the development spent a fair amount of time working with the city on the proposal and made several changes to the original design, said Hipolito “Paul” Roldán, president and CEO of Hispanic Housing Development.

“It was a collaborative effort between our architects and deputy commissioners at the department of planning,” Roldán said.

“We are on a tight time schedule to get building permits in place” and construction started by late spring, Roldán said. “It would be horrendous to go back to the drawing board when we have hyper-gentrification in that community and families are waiting to move into high-quality housing that is affordable.”

Ald. Walter Burnett (27th), a member of the plan commission, came to the defense of developers and architects behind the proposal, saying affordable housing developments “have to get layers and layers of funding” and “sometimes [there’s] not a whole lot of money for design.”

Maldonado told commissioners the proposed development that is nearly five years in the making has the support of the community, including that of The Puerto Rican Agenda of Chicago, a non-profit organization made up of local Puerto Rican leaders.

“We can spend the whole day [talking] about more beautiful designs to the liking of some of the commissioners,” Maldonado said. “But at the same time, I’m thinking about the thousands of families that are continually displaced every year from my ward” due to gentrification.

“We are under a lot of pressure to move on this so we can meet the financial obligations and make this happen,” Maldonado said, urging plan commissioners to advance the proposal.

Earlier this year, the planning department created a new volunteer-based design committee to review the design of some big developments. Burnett has been critical of the committee, saying it slows down the process of getting a new development approved.

Chicago Shooting News Live: A gunman on a rooftop opened fire on an Independence Day parade in suburban Chicago on Monday, killing at least six people, wounding at least 30 and sending hundreds of … END_OF_DOCUMENT_TOKEN_TO_BE_REPLACED

The real estate industry is beyond crowded — it seems like agents are popping up everywhere and taking aim at your clients. So, how can you cut through all that noise to stand out? You’ve got to … END_OF_DOCUMENT_TOKEN_TO_BE_REPLACED

Chicago Mayor Lori Lightfoot confirmed to the New York Times that the Chicago Police Department is assisting in the response and investigation.  “Law enforcement is working hard to bring the shooter … END_OF_DOCUMENT_TOKEN_TO_BE_REPLACED