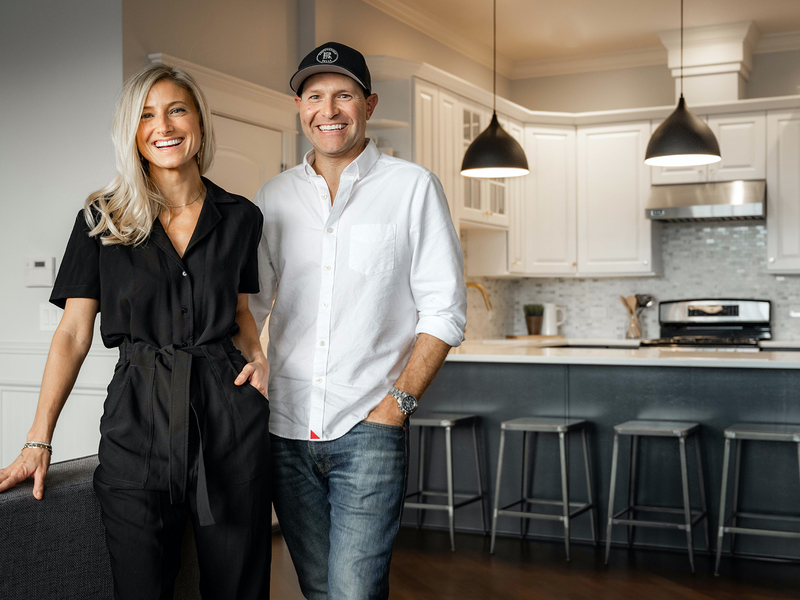 For Drawert and other franchisees, the target customer is not a homeowner but a real estate agent, typically one who has a listing that looks dated with its oak cabinets and chrome faucets. The listing agents “are the ones who tell their clients that this place is going to do much better on the market if it gets some cosmetic changes,” Valente says, “and the clients trust them to know how to market homes.”

On top of that, Valente says that “the single homeowner you work for, you might never hear from them again unless they sell their house again, but a real estate agent may bring you 10 or 15 projects a year.”

The typical job costs $30,000, takes three weeks and, Valente says, is meant for “the seller who’s moving on. If you’re doing your kitchen and you plan to stay in the home, that’s not something we do. We do quick updates, and the projects we do go right to market.”

The key there is that the cosmetic work is being done expressly to help the home look good on the market. Gershenzon, the partner in charge of design at Renovation Sells, has a palette of colors, materials and looks that are “in style but appeal to the mass of buyers,” Valente says. “We don’t get too funky.”

The rehabs are big but not exclusive on white and gray, the neutral tones that pervade online real estate listings these days. “We have a lot of two-toned cabinets now,” Valente says. “White uppers and gray lowers, or the colors that are in for kitchens this year. Green is a big color now.”

Design for all the franchisees’ clients will be handled centrally in Chicago. The franchisee will take detailed measurements and images, including three-dimensional Matterport tours, and forward it all digitally to Chicago, along with any comments from the listing agent. The franchisee later gets back a complete design, along with a shopping list for materials that includes links to places they’re sold.

“They’re making it very easy for us,” says Scott Migli, who with his wife, Rachel, bought the Renovation Sells franchise for Charleston, S.C. He’s a consultant on school choice issues for state and local governments and she’s a schoolteacher.
The couple didn’t get into this because they’re aspiring interior designers, but to have a business of their own.

Recent empty-nesters, the Miglis had been looking at various franchises in the water and car care realms before they came across Renovation Sells.

The Miglis ran the idea of quick-turnaround cosmetic rehab past friends in their area who are real estate agents or contractors “and everyone loved the idea,” Scott Migli says. “Everyone is looking for homes that are up to the 21st century look. They don’t want to do it after they move in.”

Homeowners typically pay for the work out of their sale proceeds, which means they don’t have to find the cash upfront, while they’re trying to scrape together the money for their next home.

Chris McComas, an @properties agent who specializes in the West Loop has hooked at least 10 of his sellers up with Renovation Sells in the past couple of years.

“They spent between $20,000 and $50,000, and do they get it back?” he says. “The majority of them got their investment back plus a significant return” compared with similar properties that were not refreshed.

Many of McComas’ clients are selling units that were built in the early to mid-2000s, he says. The sellers know today’s buyers don’t like dark cabinets and excessively patterned granite countertops—remember Uba Tuba?—but they feel overwhelmed about updating.

With Renovation Sells, “the sellers don’t have to make any decisions,” McComas says. The firm “comes in with a turnkey solution, and the sellers can just sit back and have it done.”

McComas says his West Loop clients who updated with Renovation Sells land buyers within 30 days. That’s less than half the 83-day market time that the Chicago Association of Realtors reports for condos in the neighborhood.

Valente says he does not have complete data on how fast or for how much above the market Renovation Sells projects have gone for.

CHICAGO — The City Council on Monday delayed a vote on Mayor Lightfoot’s curfew change — but a group of young residents are urging members to vote no. The young adults are part of the racial … END_OF_DOCUMENT_TOKEN_TO_BE_REPLACED

The fire at the former Pheasant Run Resort, 4051 E. Main St., broke out Saturday afternoon, sending huge plumes of smoke into the sky surrounding the closed resort and drawing dozens of onlookers who … END_OF_DOCUMENT_TOKEN_TO_BE_REPLACED

As the 2022 political season gets into full swing, one of the most intriguing candidates for elected office is Herschel Walker. The star running back with the University of Georgia and Dallas Cowboys … END_OF_DOCUMENT_TOKEN_TO_BE_REPLACED