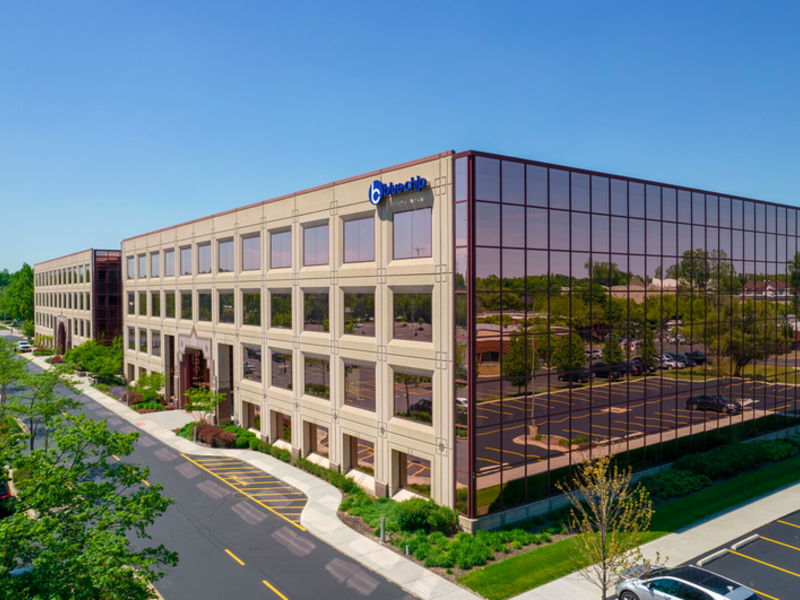 Elbaum and Bernstein, who are co-founders of brokerage Bradford Allen Realty Services, picked up the property just eight months after they bought another north suburban office building at 570 Lake Cook Road in Deerfield for about $16 million. That deal followed the $44 million they paid in September 2020 for Finley Point, a nine-story office building in west suburban Downers Grove.

It’s a string of purchases they’ve put together amid a public health crisis that so far has diminished demand for suburban offices. BA is one of the biggest local bettors that the tough times for suburban landlords won’t last, and that more companies will gravitate to high-quality office buildings in the suburbs when the pandemic subsides.

Elbaum and Bernstein, who declined to comment, are counting on that bounceback at the 188,040-square-foot property they’re buying in Northbrook. The four-story building is just 68 percent leased, below the 80 percent average for the north Cook County submarket, according to data from brokerage Jones Lang LaSalle.

If the demand is going to come back after 17 months of a pandemic that has accelerated a millennial migration to the suburbs, it hasn’t shown up in the numbers yet. Net absorption, which measures the change in leased and occupied space compared with the previous period, fell by 470,000 square feet during the second quarter, the second-worst quarter of demand since 2017, according to JLL. Those move-outs outpacing move-ins drove up the suburban office vacancy rate midway through the year to a record high 26.1 percent, JLL data shows.

But BA has also notched some leasing victories of late at its other suburban properties, giving it reason to believe it can do the same in Northbrook. At 570 Lake Cook Road, BA recently signed a series of small lease renewals and expansions, including a deal to keep software company Vail Systems in its 16,477-square-foot office.

Edens Corporate Center has also been substantially renovated in recent years by the seller, a venture of Newport Beach, Calif.-based KBS Realty Advisors. KBS, which paid just more than $30 million for the property in 2016, spent another $4 million-plus updating the building’s corridors and elevators and adding a bike room, among other renovations.

The value of the building has dropped off in part because a series of small tenants have moved out or downsized since KBS’ purchase, leaving the property with less in-place cash flow and making it a bigger gamble that a buyer could lease up the empty space.

The building has roughly 3-and-a-half years of weighted average lease term—a measure of tenants’ remaining lease commitments to the property—with marketing agency Blue Chip Marketing as its largest tenant, according to a JLL flyer.

The capital markets team in JLL’s Chicago office is selling the property on behalf of KBS. A KBS spokesperson couldn’t be reached.

Another challenge for BA at Edens Corporate Center is that it competes with office buildings just north of it in Lake County, where landlords may have a growing property tax advantage—something BA may itself look to exploit at its 570 Lake Cook Road property.

Taxes on commercial buildings in north suburban Cook County rose by an average of nearly 16 percent after Kaegi reassessed such properties in 2019, according to Cook County Treasurer data. Tax bills due this year (based on 2020 assessments) for commercial properties in the same area rose by 5.2 percent.

A representative for Vistria declined to comment. Founded in 2013 and led by Marty Nesbitt and Kip Kirkpatrick, Vistria manages more than $8 billion in assets and invests across health care, education … END_OF_DOCUMENT_TOKEN_TO_BE_REPLACED