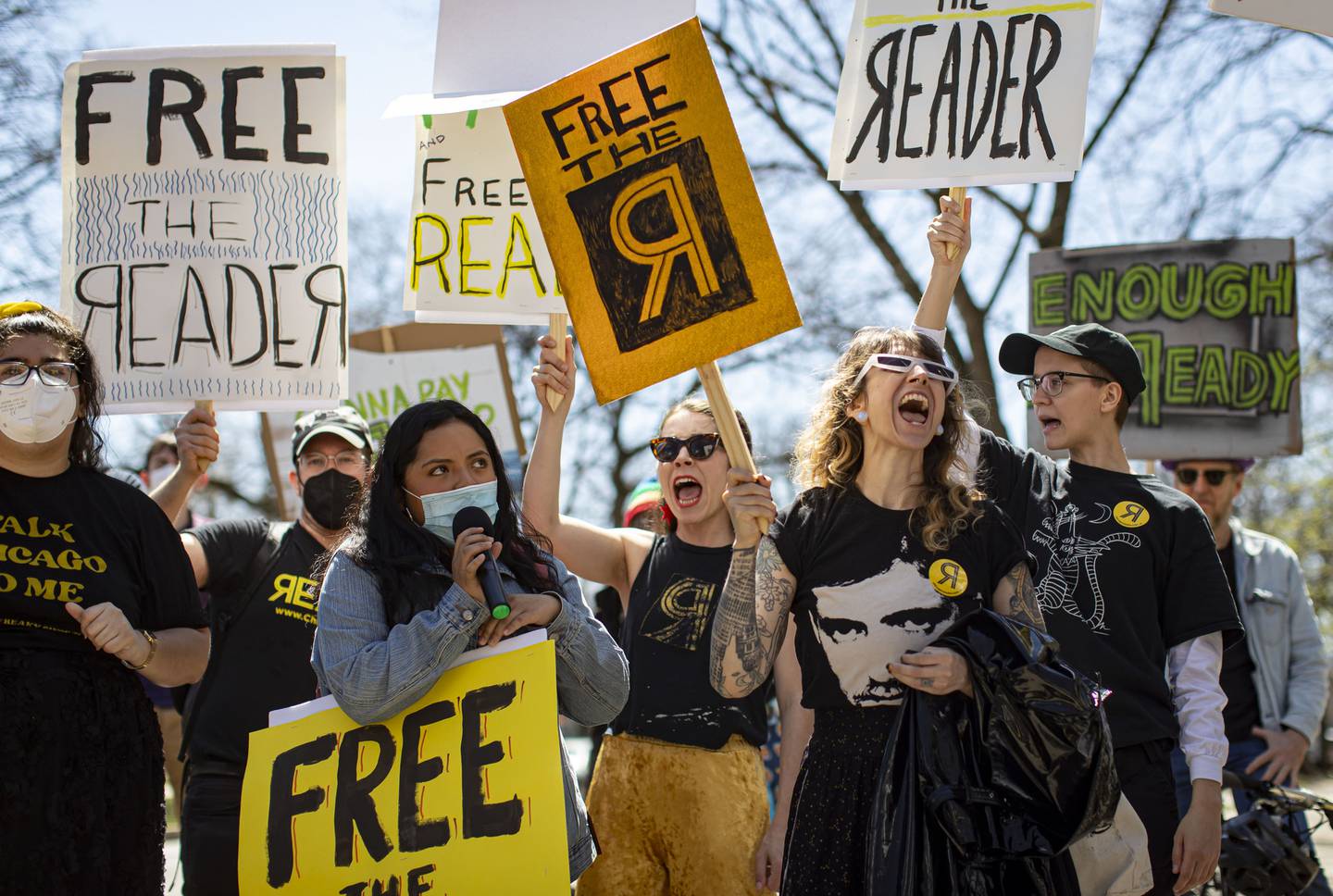 Embroiled in an internecine battle between two owners who rescued it from dissolution nearly four years ago, the Chicago Reader, the city’s alternative newspaper for more than 50 years, is running out of money and time.

The Reader has been stuck in limbo since December, when a planned transition to a nonprofit model was delayed over concerns about alleged censorship of an opinion piece written by co-owner Len Goodman, who has pushed for an investigation into the matter and more representation on the successor board.

Increasingly frustrated Reader editorial employees organized a rally Thursday in front of Goodman’s Lakeview East home in a “last ditch effort” to get the criminal defense attorney to relinquish control and let the newspaper move forward as a nonprofit. Goodman blames Reader management for not addressing his concerns.

“The Reader needs to be free to pursue its path as a nonprofit, or it’s going to be nonviable, and we’re going to lose our jobs,” said Philip Montoro, 50, music editor at the Reader and head of its 17-member local unit of the Chicago News Guild. “We can’t count on the owners to finance us in perpetuity.”

In 2018, Goodman and Chicago real estate developer Elzie Higginbottom bought the Reader from the Chicago Sun-Times for $1 and the assumption of debt. Since then, they have invested more than $1 million each to keep it afloat, weathering the pandemic and supporting the money-losing publication in its quest to find a more sustainable future.

Tracy Baim, 59, a longtime Chicago journalist and co-founder of the Windy City Times, took the helm of the Reader under the new owners in 2018 and created the planned transition to a nonprofit organization. That plan was delayed after editors pushed back on a November opinion piece by Goodman expressing concerns about vaccinating his 6-year-old daughter against COVID-19, which created backlash on social media for some disputed scientific claims.

The Reader looked to reel the piece back in, hiring an outside fact-checker for a post-publication edit. Baim, who intervened on behalf of her editors, suggested publishing a revised version or pulling it entirely. Goodman objected to either option.

“Editorial control is before you publish, not after you publish something and there’s a public outcry to take it down,” said Goodman, 60. “I wrote 21 pieces for the Reader. All of them were submitted on deadline. All of them were fact checked. I accepted all of the fact checks. I never pushed back or disagreed with any fact check. This particular piece was handled just like every other one.”

Baim said a Goodman “surrogate on the board,” whom she declined to name, demanded that he get a column as part of his ownership deal. Goodman said “there was no condition or agreement that I would write a column” when he and Higginbottom acquired the Reader.

While Baim said deadline pressures caused Goodman’s controversial piece “not to have the in-depth edit it should have had,” she defended the post-publication fact check as necessary and a normal part of journalism. A revised version with a “lot of corrections,” most of which involved qualifying the cited studies, was “very solid,” she said.

Under pressure from Goodman, Baim relented and the piece remained online and unchanged.

“I was in a negotiation with a writer who happened to be a co-owner, at a huge disadvantage to our team,” said Baim. “I tried to negotiate with him on behalf of the editorial staff. And when we came to loggerheads, we gave in.”

The matter did not end there, however. On Dec. 17, the for-profit board passed a resolution urging the planned transition to the nonprofit, set to take place on Dec. 31, “not proceed until the issue of censorship” of Goodman’s piece was “further investigated and resolved.” The resolution also urged that the closing of the sale be contingent on Goodman getting “an equal amount of appointees” on the successor nonprofit board.

The for-profit board, reduced to three members at the time by an unrelated resignation, included two Higginbottom appointees and one Goodman representative. Chicago Crusader publisher Dorothy Leavell, who serves as board chair and was initially appointed by Higginbottom, voted for the resolution along with Sladjana Vuckovic, a Chicago attorney appointed by Goodman.

“I didn’t agree with how they had treated the article that Mr. Goodman had written,” Leavell said.

Higginbottom terminated Leavell as his board representative after the resolution vote, but she was reappointed to the for-profit board by Goodman, and remains chair. She is also one of nine members on the 11-member nonprofit board.

“We’re supposed to do this, and Len is stuck on the fact that there was some question about his article,” said Higginbottom, 80. “I was willing to go forward.”

Equal partners in the Reader, Goodman has contributed about $2 million, while Higginbottom has put in $1 million and provided free office space for the publication. Each was entitled to appoint two members to the for-profit board. It is unclear if they have the right to appoint anyone to the 11-member nonprofit board.

Baim was elected president of the nonprofit, a role she has volunteered to relinquish if it would assuage any concerns or expedite resolution of the ownership impasse.

“She can be the publisher,” Leavell said. “We don’t think she ought to be the president and publisher.”

Miner, Barnhill & Galland, a Chicago law firm representing the Reader Institute for Community Journalism, issued a memorandum last month that warned of “substantial legal risks” if the bylaws were changed to allow the for-profit entity to appoint directors to the nonprofit board.

The Reader co-owners have met several times in an attempt to resolve the nonprofit board composition issue. Those meetings have produced more disagreement.

Higginbottom subsequently recommended Bob Reiter, president of the Chicago Federation of Labor, as the ninth nonprofit board member. He also named himself and Reiter as representatives to the for-profit board, joining Goodman’s directors, Leavell and Vuckovic. Reiter has already been approved for the nonprofit board, Baim said.

Goodman said he submitted four candidates to the nonprofit board from which to seat two, with a proposal to mediate the third seat, now filled by Reiter, after closing.

The idea that the nonprofit board members be aligned equally with the two for-profit owners was not raised as an issue when the Reader Institute for Community Journalism was formed, but only came up two years later after editors requested the post-publication fact check of Goodman’s column, Baim said.

Baim said beyond the four predecessor board members, the balance of the nonprofit appointees have no affiliation with either owner. Based on the legal advice the Reader received, that is the only way to maintain its nonprofit status and journalistic integrity, Baim said.

“Len Goodman thinks that he, as a for-profit business owner, should have control over nominating board seats to the nonprofit,” Baim said. “Elzie does not have that right either. This is an independent nonprofit.”

The shift to a nonprofit model is a growing trend in the struggling newspaper industry, with the Salt Lake Tribune the first major daily newspaper to make the transition in November 2019. In January, the Sun-Times became a nonprofit newspaper when it merged with public radio station WBEZ-FM 91.5 under the banner of Chicago Public Media.

The Reader was on a fast track to make the transition after forming the nonprofit entity in 2019, but the pandemic slowed things down, Baim said.

One complication was two federal Paycheck Protection Program loans totaling nearly $557,000 received by the Reader. The forgivable loans had to be off the books before transitioning to a nonprofit, with the final $278,395 loan paid in full on Nov. 20, according to data posted online by the Small Business Administration.

“We’ll be out of money in 30 days,” Higginbottom said.

The Reader has an annual budget of about $2.8 million, Baim said, and was approaching break-even through a combination of advertising and charitable support. Neither owner has committed to additional funds for the Reader, making the transition to nonprofit even more urgent.

Launched in 1971 by a group of Carleton College graduates as a free weekly, the Reader became known for its ambitious long-form journalism, arts news and offbeat classified ads. Like many print publications, the Reader has struggled in the digital age, leading to a series of ownership changes.

The original ownership group sold the Reader in 2007 to Creative Loafing, a small chain of alternative weeklies based in Atlanta. Atalaya Capital Management, a New York-based hedge fund, acquired the Reader out of bankruptcy in 2009. Wrapports, a Chicago investor group led by Michael Ferro that acquired the Sun-Times in late 2011, added the Reader to its portfolio in May 2012 for about $2.5 million.

In 2017, an investor group that included Goodman and Higginbottom bought the Sun-Times, the Reader and other assets for $1. One year later, when the Sun-Times was looking to shed the unprofitable Reader, Goodman and Higginbottom put up another dollar and bought it, assuming the debt and stewardship of a Chicago journalistic institution, whose days may now be numbered.

For 35 Reader employees and their supporters, Thursday’s 11 a.m. “Save the Reader” rally across from Goodman’s home at Wellington Avenue and Jean Baptiste Point DuSable Lake Shore Drive was meant to be respectful to the neighborhood, but disruptive for at least one resident.

“We do need to make a little noise,” said Montoro, a 26-year employee at the Reader. “Being polite, being nonconfrontational, hoping he’d come to his senses, turns out to have been a pretty poor strategy. And now we’re out of time.”

CHICAGO — Former Ukrainian troops are visiting Chicago to pay tribute to their brothers-in-arms this Memorial Day Weekend. Ukrainian veterans who fought in places like the Donbas region and the … END_OF_DOCUMENT_TOKEN_TO_BE_REPLACED

Hart was promoted to president from general counsel in 2020, but the CARES Act compensation limits were based on 2019 pay. His total compensation last year was estimated at $3.5 million, mostly … END_OF_DOCUMENT_TOKEN_TO_BE_REPLACED

After an often-contentious floor debate, the Chicago City Council has passed a new weekend curfew for the city’s residents, moving it back from 11 p.m. to 10 p.m. on weekends. The new ordinance will … END_OF_DOCUMENT_TOKEN_TO_BE_REPLACED