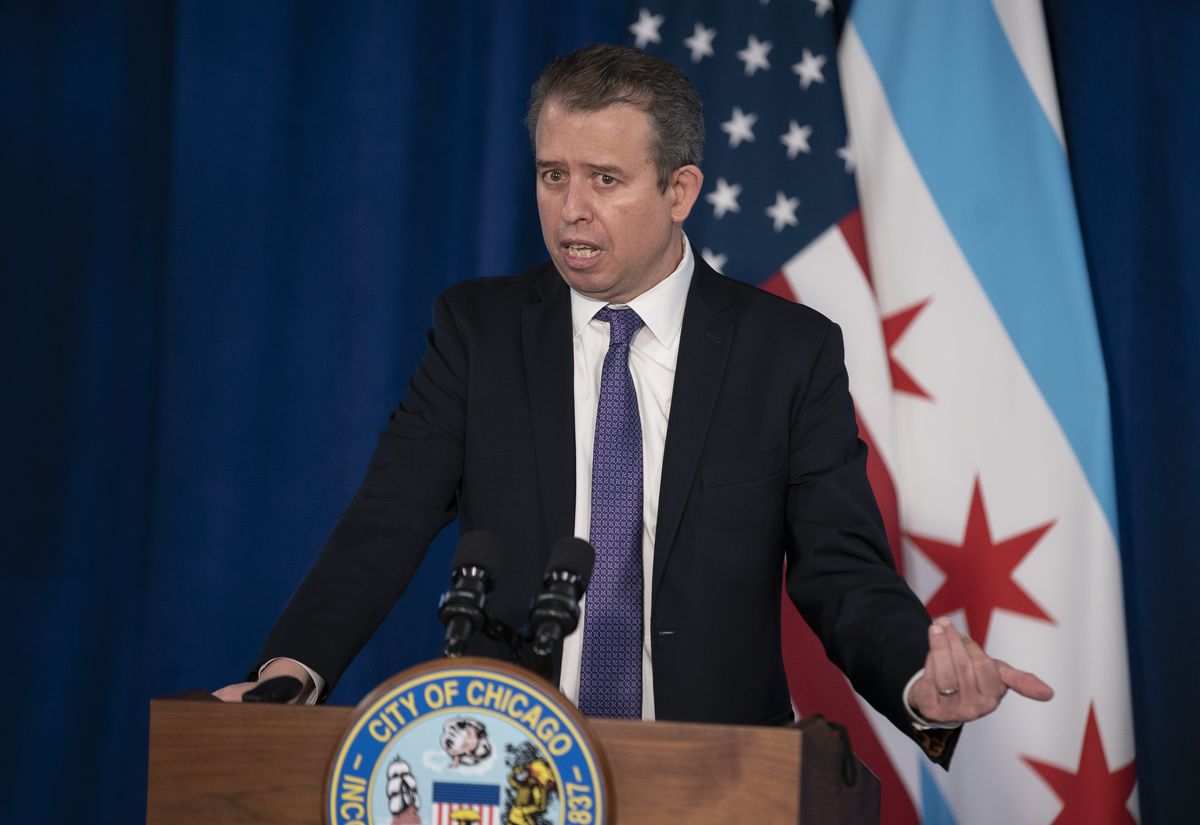 And then Martinez signed off on paying Carson just under $29,000 to go, records obtained by the Chicago Sun-Times show.

That’s according to the “Severance and General Release Agreement” signed by CPS’ top lawyer Nov. 9 that authorized paying Carson $28,958.85 — the equivalent of 60 days of his $175,100 yearly salary, plus health and dental benefits for his family through Jan. 31.

Carson was forced out Nov. 4, a week after the Sun-Times reported that one Southwest Side elementary school was so filthy that teachers, the principal and other administrators had been grabbing mops and brooms themselves, and parents were offering to lend a hand because CPS and a private contractor hadn’t even ensured that the bathrooms had soap or toilet paper.

“There is a mutual desire of the parties to move in a new direction,” read the seven-page document detailing Carson’s severance, which says the payout was “to ensure a smooth transition for the Facilities Department and to resolve any and all issues related to Carson’s employment with the Board.”

Such severance deals are unusual at CPS. None has been offered to other high-profile school system officials who’ve been ousted in recent years, among them Carson’s predecessors in the top facilities post.

Carson’s deal specifies that he would not be barred from being rehired to work for CPS in the future, and there’s no “Do Not Hire” designation in his personnel file.

Asked about his payout, a CPS spokeswoman initially said officials “have not had any time to address your questions” and then didn’t respond to follow-up requests for comment.

A day after the Sun-Times reported Carson was out, Martinez told reporters: “My commitment to our board, to the mayor, to the parents and the community [is] we’re gonna hold ourselves accountable. And I will make changes as needed. And just know that’s gonna be the way we’re gonna work.”

As kids returned to classrooms full time this school year after a year in which CPS largely relied on at-home, online learning because of the coronavirus pandemic, the school system has struggled with keeping schools clean amid a shift to a new private contractor to oversee facilities management. Jones Lang LaSalle, a Chicago real estate management company that was given the three-year, $125.5 million-a-year contract, hadn’t previously overseen K-12 schools.

Despite years of complaints about cleanliness, officials also expanded the role of Aramark, another private contractor, to manage custodians at all CPS buildings after promising to dump Aramark and SodexoMagic. Those companies had overseen cleaning at Chicago’s schools since 2014.

CPS officials have blamed a national labor shortage amid the pandemic for keeping the contractors from being able to hire enough custodians to fill vacancies to be able to fully staff the city’s schools and to find fill-ins when custodians are out sick.

Carson departed after the Sun-Times reported in October on problems at Eberhart Elementary School on the Southwest Side. Besides the filthy bathrooms with no soap or toilet paper, the hallways hadn’t been mopped for weeks, no one was taking out the garbage from the lunchroom that’s shared by most of the school’s 1,100 students, and kindergartners came in one morning to a classroom littered with animal droppings.

CPS sent in reinforcements after that. But officials still won’t say how many schools had extra weekend crews brought in to keep up with cleaning.

Carson was hired in 2018 to deal with problems that sprung up after CPS privatized school facilities work and oversight. He was CPS’ fifth facilities chief since 2014.

His predecessor also resigned under pressure following Sun-Times reports in 2018 on dirty schools.

And her predecessor had been forced out in 2017 amid questions about whether he lived in Chicago, as CPS rules require, or in the suburbs, where his wife and family lived.

Carson had been making $170,000 a year until he got a pay raise in August, boosting his salary to $175,100, part of an across-the-board series of increases given to administrators in schools and at CPS’ central office.

Here is a new way you can watch local news, 24 hours a day, seven days a week – for free!  NBC 5 has launched NBC Chicago News on Peacock. Here, you will see around-the-clock local news coverage. … END_OF_DOCUMENT_TOKEN_TO_BE_REPLACED

Proper Rate, the joint venture by Guaranteed Rate and @properties, has named Rich Honquest as a new vice president of mortgage lending. In the position, Honquest will be originating loans in the … END_OF_DOCUMENT_TOKEN_TO_BE_REPLACED

Tuition for out-of-state and international freshmen will increase by 2.5% in Urbana-Champaign, 1.8% in Chicago and 1.5% in Springfield. Tuition at U of I was previously frozen from 2015-2019 and in … END_OF_DOCUMENT_TOKEN_TO_BE_REPLACED