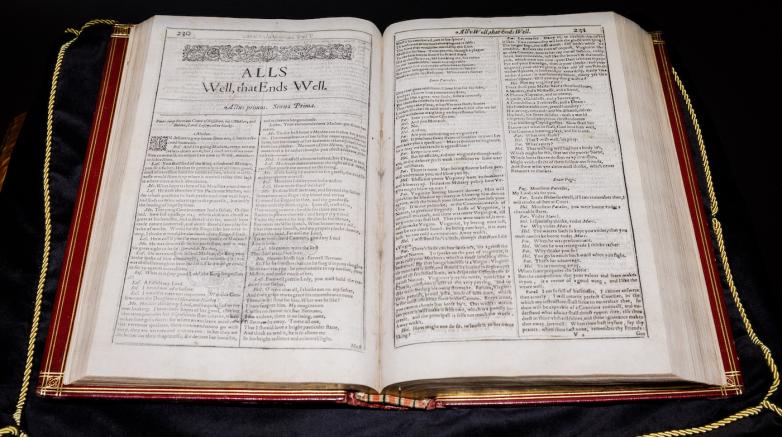 New York — Often referred to as the most important book in English literature, Shakespeare’s First Folio is an extraordinary piece of history dating back to 1623. One of fewer than twenty remaining in private hands, Sotheby’s will offer a First Folio at its forthcoming sale of Books and Manuscripts in New York on 7 July, carrying an estimate of $1.5 – 2.5 million.

Well-loved and read over the past 399 years, this book reveals details about each of its owners who have left their marks on its pages. It is thought to be the only copy with early Scottish provenance, having been first acquired by the historic Gordon Family in the early 17th-century, it was then passed down through the generations to famous racehorse breeder and socialite William Stuart Stirling Crawfurd (1819 –1883), whose bookplate can be seen stuck into the folio’s pages. It was then owned by political activist Professor R W Seton-Watson (1879 -1951) who, during and after the First World War, championed the fall of the Austro Hungarian empire and fostered the emergence of Czechoslovakia and Yugoslavia. In the 1960s it crossed the Atlantic to be held the collection of Abel E. Berland, a Chicago real estate executive and great bibliophile.

“The appearance of a Shakespeare First Folio on the market is always a major event, with so few copies remaining in private hands. Printed nearly 400 years ago, the folios are an important record that preserved Shakespeare’s legendary output forever, ensuring that many of his famous works were not lost to history. This copy is particularly special for the traces of the previous owners in its pages, many of whom have left their indelible imprint throughout the book, reminding us that this is also a living piece of human history that captures the ways in which generations of Shakespeare fans have been inspired by The Bard.” — Richard Austin, Sotheby’s Global Head of Books & Manuscripts.

Demonstrating the varied responses to Shakespeare through the generations, there are 17th-century manuscript annotations, doodles, ink spills and markings across over 30 pages in at least five different hands, mostly from the Gordon family, all traces of whom would be lost apart from their presence in these pages. Three members wrote their names: John Gordon (at least five times), Joan Gordon (twice), and Alex Gordon (once), a common practice throughout history. There are fragments of prayers, verse and even mysterious lines from a “John Frasere”, a speech asking for Herculean strength “to beatt him That let my love be stolen away when I was sliping”. The only direct response to Shakespeare’s text is in the marking of three speeches in Julius Caesar.

Assembled seven years after Shakespeare’s death by his trusted colleagues, John Heminges and Henry Condell, the folio comprises 36 plays, an invaluable resource considering no contemporary manuscripts or prompt copies of Shakespeare’s plays survive today. The folio not only allowed audiences to access Shakespeare’s texts, it also significantly serves as a source text for 18 plays; works such as Macbeth, The Tempest, Twelfth Night, The Taming of the Shrew and All’s Well that Ends Well, which are not recorded elsewhere would have been lost to history had it not been for this diligent record. As well as being the most reliable record we have of Shakespeare’s texts, Heminges and Condell’s efforts to divide the plays into categories such as ‘comedies’, ‘tragedies’ and ‘histories’ still shape our interpretations of The Bard today.

In modern times, only one third of the first folios that were originally printed survive, with many held in prestigious collections globally, including at the Shakespeare Folger Library in Washington, The British Library, New York Public Library, Victoria and Albert Museum and Meisei University in Tokyo.

The First Folio will be on display in our London galleries until 15 June.

Chicago Shooting News Live: A gunman on a rooftop opened fire on an Independence Day parade in suburban Chicago on Monday, killing at least six people, wounding at least 30 and sending hundreds of … END_OF_DOCUMENT_TOKEN_TO_BE_REPLACED

The real estate industry is beyond crowded — it seems like agents are popping up everywhere and taking aim at your clients. So, how can you cut through all that noise to stand out? You’ve got to … END_OF_DOCUMENT_TOKEN_TO_BE_REPLACED

Chicago Mayor Lori Lightfoot confirmed to the New York Times that the Chicago Police Department is assisting in the response and investigation.  “Law enforcement is working hard to bring the shooter … END_OF_DOCUMENT_TOKEN_TO_BE_REPLACED