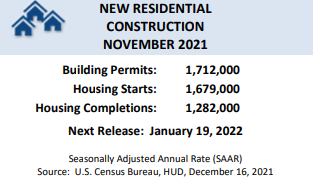 The pace of new-home construction jumped in November, as builders hustled to meet surging demand against a backdrop of short supply.

Single-family housing starts jumped 11.3% from October’s revised estimate to 1,173,000, and multifamily starts surged 12.1% to 491,000, according to the U.S. Census Bureau and the U.S. Department of Housing and Urban Development.

Altogether, the combined construction pace of single-family homes and buildings with five or more units was up 11.8% month over month, at 1,679,000 units. Starts were up 8.3% compared to a year ago.

The seasonally adjusted annual rate for privately owned housing units authorized by building permits was at 1,712,000 in November, up 3.6% from October’s revised rate and up 0.9% compared to November 2020.

The strong pace of new-home sales in September and October indicates market optimism and suggests that as supply-chain issues are worked out, the pace of housing starts will rise, RCLCO Real Estate Consulting principal Kelly Mangold said.

Mangold also noted that millennials comprise the greatest share of home-loan applicants, and the current work-from-home environment in which they are entering their family-formation years suggests increased demand for growing-family and home-office space.

“The bottom line is we need more homes, and it will take time to reduce the housing stock ‘debt’ in the face of growing demand,” Kushi said and pointed to the recently released report from the National Association of Home Builders, which showed the fourth consecutive increase in builder confidence. “Today’s housing starts report, in combination with a positive builder’s sentiment report, sends an optimistic message about the housing market as we enter 2022.”

Chicago Shooting News Live: A gunman on a rooftop opened fire on an Independence Day parade in suburban Chicago on Monday, killing at least six people, wounding at least 30 and sending hundreds of … END_OF_DOCUMENT_TOKEN_TO_BE_REPLACED

The real estate industry is beyond crowded — it seems like agents are popping up everywhere and taking aim at your clients. So, how can you cut through all that noise to stand out? You’ve got to … END_OF_DOCUMENT_TOKEN_TO_BE_REPLACED

Chicago Mayor Lori Lightfoot confirmed to the New York Times that the Chicago Police Department is assisting in the response and investigation.  “Law enforcement is working hard to bring the shooter … END_OF_DOCUMENT_TOKEN_TO_BE_REPLACED