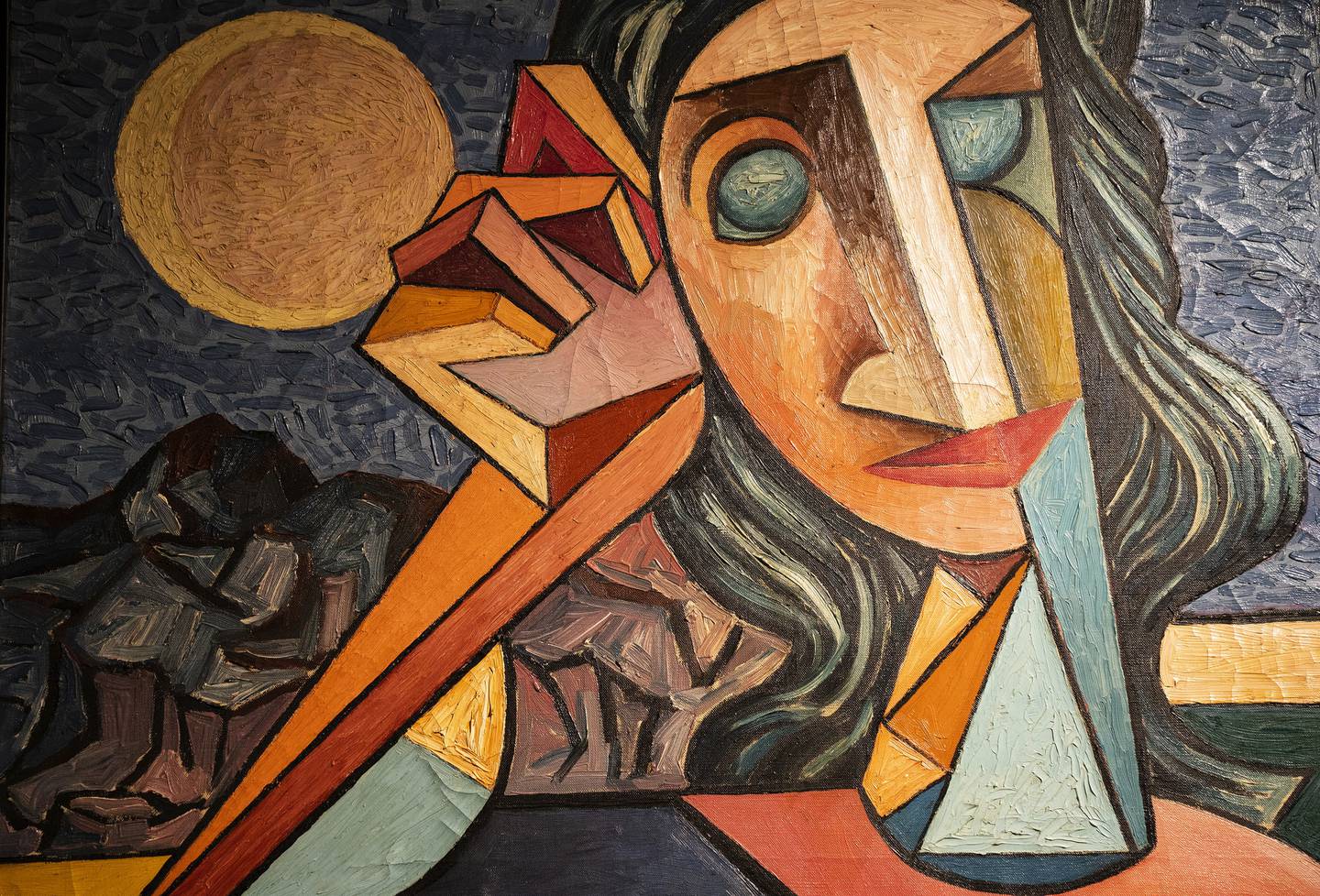 Once upon a time, there were seven very large paintings that dominated the wall behind the palette-shaped bar at Riccardo’s Restaurant and Gallery, which was as lively an oasis as this city has ever known.

The paintings were first unveiled in 1948, a stunning addition to the restaurant Ric Riccardo (born Richard Novaretti in Italy) opened in 1934 at the corner of Rush and Hubbard Streets. He had been a ship’s mate (and painter, dancer and musician) who married a woman named Mimi, performed with her at a Georgia nightclub, tried to sell his paintings, worked in magazine publishing and ran a restaurant/speakeasy on South Oakley Avenue.

He opened his place on Rush Street in a small space where he allowed artist friends to hang their work (for sale) on the walls. He painted three large female nudes and mounted two of them on the ceiling. He soon expanded into the next building and in 1947 boldly into the southernmost building, creating a bar in the shape of an artist’s palette and placing above it on the wall seven paintings representing the “Lively Arts.”

Riccardo’s was, as I have written, a “remarkable gathering place for artists, writers, journalists, opera singers and movie stars, admen, drunks, scalawags and bon vivants, real and would-be. It was called the ‘Montmartre of the Midwest.’”

For a time, the paintings were believed to have been lost, as noted in a fine 2001 book, “Guide to Chicago Murals,” by Mary Lackritz Gray, who declared them “missing,” with critic Franz Schulze adding in the book’s forward that they had “simply disappeared.”

But the paintings were in the process of being reunited, and they were, and now they hang in all their compelling glory as the largest part of an exhibition, “Palette and Palate,” at the Madron Gallery (1000 W. North Ave.; www.madrongallery.com). Grouped beside one another on one wall, the paintings are stunning and, for many of a certain age, able to evoke marvelous memories.

Rachel Wakeman is the charming and knowledgeable director of the gallery, which has been handsomely fashioned from what had been the Peter Hand Brewery from 1891 to 1978. She is decades too young to have ever been to Riccardo’s but she has enjoyed hearing stories from those who went.

“The opening was so special,” she said. “Many were quite moved by the paintings but also by what memories they brought back. Some thought these had been lost to history, so there was considerable joy. Me? I think that I would have liked having a drink at Riccardo’s. My favorite of the paintings? That changes from time to time but ‘Literature’ has really been growing on me.”

The show opened in early September and and there are conversations about mounting it elsewhere too. The massive paintings, collectively known as “The Seven Lively Arts,” are 96-inch by 48-inch oil paintings, the work of Ivan Albright (“Drama”), his brother Malvin Albright (“Sculpture”), Vincent D’Agostino (“Painting”), Aaron Bohrod (“Architecture”), William Schwartz (“Music”), Rudolph Weisenborn (“Literature”), and Riccardo himself (“Dance”).

These are embellished by other paintings depicting Chicago street scenes, and by photographs, menus, magazine stories and a matchbook. Many of those latter items are on loan from Phil Koch, an acclaimed local filmmaker who has been working for a decade with his wife and filmmaking partner Sally Marschall on a documentary about the place titled “Everybody Came to Ric’s: Chicago’s Golden Age 1934-1954.”

“I was stunned at how beautiful they are,” he says. “I had never seen them together and in so doing I was transported back to Riccardo’s in its glory years. What a gift for Riccardo to have commissioned these. What a man and what a place. There has never been anything like it, before or since.”

Koch and Marschall will be at the gallery in January to talk about and screen portions of their film. “We are so close to being finished,” he says, “just looking for finishing funds. It has been a labor of love for us and this is a must-see exhibit.”

Over the palette-shaped bar at Riccardo’s Restaurant and Gallery in Chicago are murals representing the “Seven Lively Arts.” (Chicago Tribune historical photo)

The exhibition is accompanied by an informative essay by writer Alex Cornacchia. They write of the history of the paintings, Riccardo and his desire to give “new and homegrown talent a chance to be seen where other galleries and museums might not.”

Riccardo commissioned the paintings from his artist pals. It’s said he might have paid $1,000 or so for each, in addition to providing the artists free food and drink.

They were an immediate hit. As noted in his 1953 book “Chicago’s Left Bank,” writer Alson Smith deemed “These murals the pride of the restaurant.”

But pride is fragile. After Ric’s death in 1954, the restaurant carried on. It would be run by Ric’s son, the dashing and handsome Ric Jr. (by first wife Mimi), but his heart was elsewhere. Aspiring to a career in theater, he would eventually have three ex-wives along with attendant alimony and child support payments. To meet those financial demands, he sold Albright’s “Drama” and Bohrad’s “Architecture.” They were replaced by photographic reproductions, and in 1974 the restaurant was sold to capable restaurateurs, brothers Nick and Bill Angelos. There was a terrible irony when Ric Jr. died in 1977, choking on a piece of food at a restaurant in Buckeye, Arizona.

The five remaining Lively Arts paintings remained behind the bar until 1995, when Riccardo’s closed its doors for good. I was there that final night, sitting in a booth with my mother, Marilew, who had met the man who would be my father at Riccardo’s in 1948, and with MaeJuel Riccardo Allen, who was married for a time to Ric. They both shared stories, full of affection.

Detail of “Architecture” by the artist Aaron Bohrod, one of the “Lively Arts” murals now at Madron Galley. (E. Jason Wambsgans / Chicago Tribune)

They are both now gone and the paintings were gone by 2000 when the restaurant became Phil Stefani’s 437. That closed in 2016 and the building has been vacant ever since.

But back to the paintings. If there is a hero to this story it is a fascinating self-made millionaire named Seymour Persky. He was, as my former colleague Blair Kamin noted in his obituary, a “colorful Chicago real estate mogul and preservationist who amassed a dazzling collection of architectural artifacts.” He visited Riccardo’s as a young man and was compelled in 2000 to reunite the seven paintings. He worked with lawyers and art experts and noted local preservationist and collector Barton Faist to find them. It took two years and many hundreds of thousands of dollars to put them together again, and “a certain amount of financial recklessness,” he said.

After some minor cleaning, the paintings were displayed in 2002-03 at the Union League Club’s Rendezvous Bar, where Persky was a member. At the time he told writer Jeff Huebner in the Reader, “I had the time and I had the money. I felt it was an artistic coup to put them all back together again. It’s a part of Chicago history.”

The paintings then traveled and were exhibited at the Pennsylvania Academy of the Fine Arts in 2007, and the Chicago History Museum in 2008. Since Persky’s death in 2015, they have been part of the Seymour H. Persky Trust, “living” in an art storage facility before arriving at Madron.

The opening night reception in September attracted more than 300 people. One of them was Ric and MaeJuel Riccardo’s 80-year-old daughter, Jill Riccardo Begley, who had driven here from the Lexington, Kentucky, home she shares with her husband Ron.

“It was unbelievable,” she told me by telephone. “I was so glad I went. I was not feeling well but there was no way I was going to miss this. And it made me feel so much better, the nostalgia, the memories. I kept getting up to stare.”

Now, there is ever a tendency to romanticize the past and its landmarks, but in the case of these seven huge paintings, it seems not only justified but meaningfully so.

CHICAGO — A Chicago man faces criminal charges in the riot at the US Capitol nearly two years ago.  Federal authorities say James McNamara was identified as the suspect seen repeatedly ramming the … END_OF_DOCUMENT_TOKEN_TO_BE_REPLACED

Other provisions would loosen the definition of an EV worker and appear to be aimed at existing automakers in Illinois, especially Stellantis and Ford. They have huge conventional auto assembly plants … END_OF_DOCUMENT_TOKEN_TO_BE_REPLACED