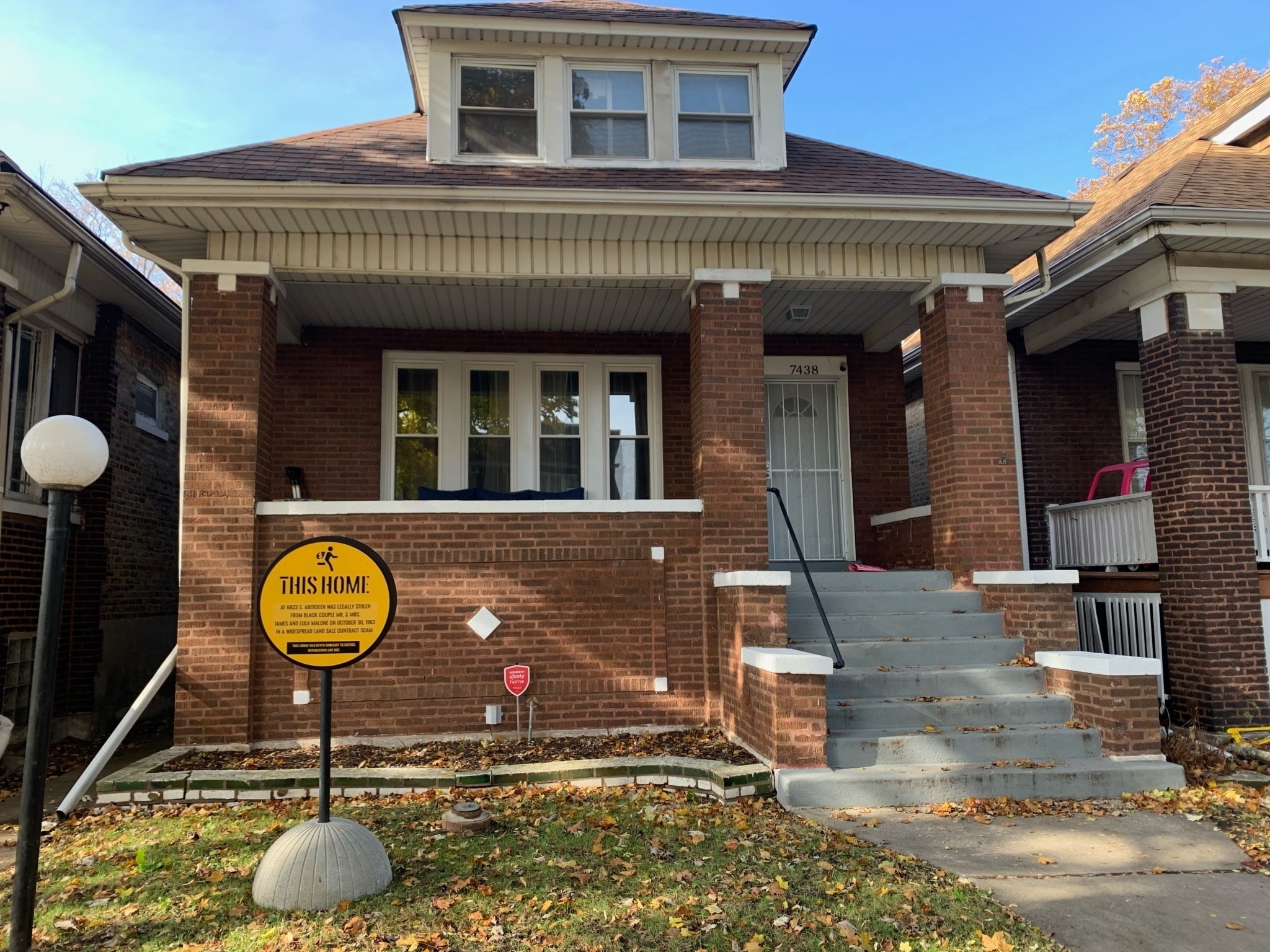 The National Public Housing Museum recently sponsored a groundbreaking exhibition that sheds light on the unsavory Chicago real estate practices of the ’50s and ’60s: selling homes to Black families using Land Sale Contracts, which imposed excessive monthly payments on buyers — many of whom lost their properties. Land Sale Contracts (LSCs) bred segregation and redlining, cheating families out of equity built through homeownership.

“Inequality for Sale” is the striking name of this exhibit, created by visual artist and NPHM 2021 Artist As Instigator Tonika Lewis Johnson. Johnson tells the often ignored story of Land Sale Contracts, which arose as alternatives to traditional lending in Chicago; this enticed many Black families and individuals who were commonly denied loans and effectively shut out of homeownership. Even Federal Housing Administration-guaranteed mortgages were unavailable to prospective buyers.

Land Sale Contracts are responsible for the expropriation of $3.2 billion to $4 billion from the Black community during the period between 1950 and 1970, according to a 2018 Duke University study. The study “The Plunder of Black Wealth in Chicago” found that 60,100 homes were purchased through LSCs by Black buyers during that period.

Launched on February 18, to coincide with Black History Month, the “inequality for sale” exhibit will feature sculptural concrete and metal markers, each over five feet high in front of the Land Sale Contract homes in Englewood. Additionally property markers will be added in the spring, and a walking tour of Englewood’s LSC homes is planned using the VAMONDE phone app. The tour connects the area’s history with Englewood’s present-day conditions.

“Many of these once-beautiful homes are now dilapidated or abandoned, visible proof of the sordid legacy of Land Sale Contracts,” Lewis Johnson said. “Having people walk through Englewood and see these properties allows them to interact with the destructive nature of Chicago’s history of redlining and segregation. It’s a powerful experience.”

“The ‘Inequity for Sale’ project is exactly the kind of historical exhibit that can be a catalyst for real change in the 21st century,” NPHM Executive Director Lisa Yun Lee, Ph.D. said. “By documenting the intersection of racial injustice with the right to homeownership, the exhibition tells a vivid and poignant story that has been largely neglected for decades.”

6329 S. Paulina (left) compared to 6330 N. Paulina (right). The difference in housing conditions between North and South side Chicago are shocking. This is a sample from Tonika’s interactive Folded Map Project.

Land Sale Contracts were offered to Black families and individuals who were not able or allowed to qualify for a traditional mortgage. The contracts allowed Black families to rent their homes with the hopes of one day buying them, but this deal came with inordinately high monthly payments. When Black families could not make these payments, which was usually inevitable due to the loan’s prohibitive rates, they were evicted by the seller without recourse, losing their home and payments.

As a result, contract holders were unable to build equity in the properties or own them outright.

These Land Sale Contracts truly took off during the 50s and 60s, amid a robust postwar U.S. housing boom. Many white families bought homes in mostly white neighborhoods with the help of VA home loans provided by the G.I. Bill. Those VA loans did not exclude Black borrowers, but they were administered by banks that often practiced redlining, which limited access to mortgages in Black neighborhoods.

The practice eventually came to an end with the 1968 Fair Housing Act that prohibited discrimination in the sale, renting, or financing of housing based on race, religion, national origin, or sex. Yet, the impact of these Land Sale Contracts continues to be felt today in Chicago’s still segregated neighborhoods and large wealth gap between the city’s Black and white residents.

Lewis Johnson, co-founder of the Resident Association of Greater Englewood (R.A.G.E.), is widely known for her Folded Map Project that explores the impact of segregation in the North and South sides of Chicago.

Lewis Johnson also is the co-host of a three-part podcast series based on the project, along with NPHM’s Program Director of Arts, Culture and Public Policy Tiff Beatty, titled “Legally Stolen,” which launched in December 2021.

SENECA, Ill. — 15 people were injured in a boat fire in Seneca on Saturday afternoon, with one person suffering serious injuries, police said. According to Illinois State Police, troopers responded … END_OF_DOCUMENT_TOKEN_TO_BE_REPLACED

Vallas was CEO of Chicago Public Schools from 1995 to 2001 and served as city budget director under former Mayor Richard M. Daley. More recently, he worked as an unpaid consultant to the Fraternal … END_OF_DOCUMENT_TOKEN_TO_BE_REPLACED

As we continue our look at the candidates running for office this summer, we’re turning our eye toward Illinois’ 2nd Congressional District, where incumbent Rep. Robin Kelly is hoping to be elected to … END_OF_DOCUMENT_TOKEN_TO_BE_REPLACED