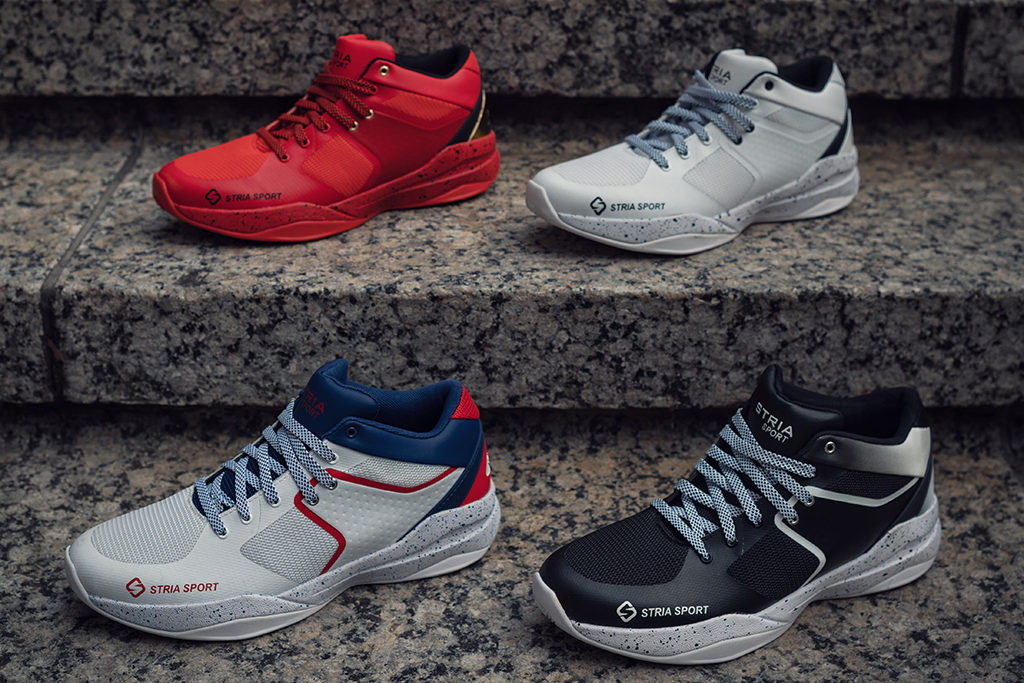 Most shoe company founders don’t have day jobs. But don’t tell that to Eric Porter.

In November 2020, Porter launched Stria Sport, an athletic footwear brand with a focus on the performance basketball market. When Porter isn’t busy getting his company off of the ground, he’s in Chicago working as a real estate developer on the acquisitions team.

“I don’t get a lot of sleep,” Porter said with a laugh.

Prior to both Stria Sport and his real estate career, Porter played college basketball, hitting the court for D-I school Loyola Chicago before transferring to play D-III ball at nearby Lake Forest College.

He named the company Stria after the Latin word “industria,” which is translated to energy. “Anything you want to do in life, you’ve got to put in the right energy to be successful. Nothing just happens,” Porter said. “We put in the time and energy and launched a really great product.”

As for the name of Stria Sport’s debut shoe, the 107 Series, Porter said the idea came from a college workout during his senior year when he hit 107 three-pointers in a row.

Porter said he is quiet about his Stria Sport venture when it comes to his 9-to-5, keeping the two worlds separate. However, he said people in real estate have found out about the company, not necessarily that he’s behind it, resulting in some surprise customers.

“I’m not actively selling shoes with the properties, this is not a joint package,” Porter said with a laugh. “But I do know people in the industry have bought the shoes. Sometimes I’ll see someone who purchased the shoe and say, ‘That name sounds familiar,’ and the next thing I know I’m getting an email blast about a property he has. But I don’t know how he heard about the shoe, I don’t even know the guy.”

When coming up with what would become the 107 Series, Porter said he researched what NBA players were wearing the most, and was inspired by the specific characteristics some of his favorite shoes offered.

Sneakers including the Nike Kobe 4 and 5, the Nike PG2 and 3, and the Under Armour Curry franchise were some that helped inform Porter on what he wanted to create. Also, he said the comfort of Hoka One One running shoes was an influence.

Eventually, Porter would come into contact with design veteran Peter Backus, who has worked for several athletic footwear companies in the past including Nike and And1. He said the two have been on the same page since the initial meeting.

“I met Peter about two months into the idea of creating a shoe, and we talked to see if we had similar thinking and totally hit it off. He totally understood the vision I had and what I wanted to have in the shoe in terms of performance, and he made what we wanted to accomplish with the shoe easy to create,” Porter said. “We spent hours on phone calls back and forth, and my dad and I flew out to Portland, Ore., to meet with him a couple times. There was a lot of back and forth, and we had trust in him.”

It took seven months to design the shoe, Porter said, and they went through 11 rounds of samples in the year and a half that followed. He had help with wear-testing from athletes as young as an eighth grade level to pros, such as Keifer Sykes, a former pro in Australia who signed with the Indiana Pacers in August, and Donte Ingram, who plays the Dutch Basketball League.

Although pros have laced them up, Stria Sport has yet to see NBA action. However, Porter did confirm that players on the Chicago Bulls, Utah Jazz, Philadelphia 76ers, Indiana Pacers and Sacramento Kings have pairs to wear.

As for consumers searching for basketball shoes, Porter explained the approach to bringing the 107 Series to market was intentionally different. For starters, he said he wanted Stria Sport to be performance-led, making the importance on aesthetics secondary.

“I think basketball shoes are trending more toward design. It’s less about performance and more about the brand and how it looks,” Porter said. “Don’t get me wrong, look is obviously a huge part, but I want a shoe based on performance, the most comfortable shoe that is extremely lightweight with insane traction. That’s what I wanted. I wanted high performance shoe that gives athletes the edge.”

As for performance, Porter placed significant emphasis on weight. He said many of the shoes from leading companies that he’s worn have weighed around 15 or 16 ounces, which he described as “wild.” Stria Sport’s shoes, according to Porter, come in at 11.8 ounces.

He also explained that he wants to steer clear of pricing people out of purchasing Stria Sport’s shoes. The price point of the 107 Series is $120, which is cheaper than most top-tier performance basketball shoes on the market today.

“Competitive athletes are using their shoes a lot, and very rarely do the shoes last a full season,” Porter said. “If you’re spending a few hundred dollars a couple of times a season, that gets really expensive.”

Also, Porter said Stria Sport is making the deal even better for teams by offering discounts on team sales. He said he also can imprint a team logo on the shoe, if requested.

At the moment, Stria Sport is solely a direct-to-consumer company, selling its 107 Series shoe and apparel through its website, Striasport.com. However, Porter said he is in the early stages of talking with retailers, and Stria Sport could potentially be in stores in 2022.  Porter is targeting the sporting goods channel and mom-and-pop shops in the midwest.

As for the company’s marketing efforts, while recognizing social media is always important, Porter said the focus is getting in front of young athletes and speaking directly with coaches.

“Things can take off with just a social media post, but our big communication is going to be with coaches across the country, whether it’s D-III colleges, D-II high schools, AAU. That’s a lot of the market that we’re talking to,” Porter said. “We’re going to be pretty aggressive with team sales and talking to coaches. I think it’ll be really big.”

Looking ahead, Porter confirmed Stria Sport could enter new categories in the future, and is considering adding a golf shoe and a casual style to its offering. But before then, he said opening up the sizing of the 107 Series in order to cater to women is a high priority. Porter also stated he has engaged in discussions with Backus on the brand’s next basketball model.

Chicago Shooting News Live: A gunman on a rooftop opened fire on an Independence Day parade in suburban Chicago on Monday, killing at least six people, wounding at least 30 and sending hundreds of … END_OF_DOCUMENT_TOKEN_TO_BE_REPLACED

The real estate industry is beyond crowded — it seems like agents are popping up everywhere and taking aim at your clients. So, how can you cut through all that noise to stand out? You’ve got to … END_OF_DOCUMENT_TOKEN_TO_BE_REPLACED

Chicago Mayor Lori Lightfoot confirmed to the New York Times that the Chicago Police Department is assisting in the response and investigation.  “Law enforcement is working hard to bring the shooter … END_OF_DOCUMENT_TOKEN_TO_BE_REPLACED