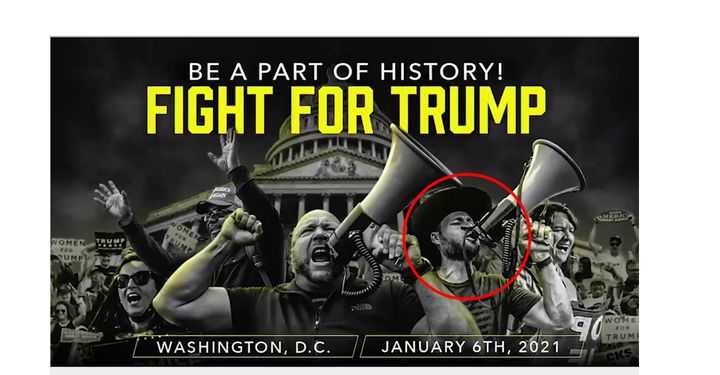 The InfoWars sidekick of extremist conspiracy theorist Alex Jones announced on air Friday that a warrant had been issued for his arrest for activities linked to the Capitol insurrection on Jan. 6.

Owen Shroyer, who hosts the Texas-based InfoWars program “War Room with Owen Shroyer,” said his attorney had told him two hours earlier about the warrant and that he had until Monday to turn himself in.

“There’s a lot of questions — some I have answers to, some I don’t,” Shroyer, appearing rattled, told his viewers. “I plan on declaring innocence of these charges because I am.”

The federal complaint filed against Shroyer on Friday accuses him of “knowingly entering or remaining in any restricted building or grounds without lawful authority” and of “violent entry and disorderly conduct on Capitol grounds.”

Alex Jones’ sidekick Owen Shroyer announces on-air today that he just learned that there is a warrant for his arrest for his conduct on Jan 6, and he has to turn himself in to authorities. pic.twitter.com/ShGYs3kAgB

Shroyer, who has frequently hailed the Capitol insurrection on his program, is one of the highest-profile media personalities to be charged so far.

His boss, Jones, who prominently appeared outside the Capitol on Jan. 6, has not been charged. Jones also helped fund the pro-Donald Trump rally preceding the riot. Some speculate that the complaint against Shroyer may indicate that Jones’ arrest can’t be far behind.

Shroyer appears alongside Jones in promotional material for the Jan. 6 rally, showing the men outside the Capitol with the words: “Fight for Trump!” The image is cited in the complaint.


A promotional photo for Jan. 6 action featuring Alex Jones and Owen Shroyer (circled), submitted as evidence in the new criminal complaint against Shroyer.

Other photos and videos show Shroyer, along with Jones, in what the complaint describes as a “restricted area” outside the Capitol on Jan. 6.

The charging papers also cite a video in which Shroyer baselessly rails on Jan. 6 against the “stolen” election and leads a crowd to the Capitol, shouting: “We aren’t going to accept it!”

The complaint also links to a video of Shroyer at a rally the previous day blasting the “stolen” presidential election and telling the revved-up mob: “Americans are ready to fight.”

In response to an earlier criminal charge for disrupting a congressional hearing in 2019, Shroyer agreed in February 2020 to community service hours in exchange for deferred prosecution. He also agreed “not to violate any laws” and not to “demonstrate” or “utter loud, threatening or abusive language at any place on the U.S. Capitol grounds,” among other restrictions, the latest complaint notes.

Shroyer still hasn’t completed his community service hours, and all the restrictions on his activities remained in place as of Jan. 6, according to the new complaint, which threatens to complicate the current case for Shroyer.

That may have been what the right-wing talk-show host was referring to when he said on air that there’s “some other stuff going on, too,” which he would not comment on.

A representative for Vistria declined to comment. Founded in 2013 and led by Marty Nesbitt and Kip Kirkpatrick, Vistria manages more than $8 billion in assets and invests across health care, education … END_OF_DOCUMENT_TOKEN_TO_BE_REPLACED