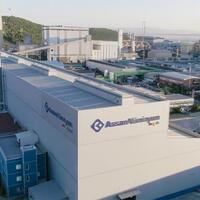 Assan Alüminyum, one of the world’s largest manufacturers in the flat-rolled aluminum industry, is planning to launch a factory in the U.S with an investment of $460 million.

“Our strategy is to grow in Europe and the U.S., while also strengthening our presence in the Asia Pacific region,” Ali Kibar, chair of Kibar Holding executive board, told reporters in Dusseldorf in Germany, where the company attended the Aluminum 2022 trade fair.

The company aims to meet the demand of American companies that are required to comply with the “Made in USA” standard, Kibar added, noting that the planned factory’s annual production capacity will be 120,000 tons.

Assan Alüminyon is also exploring opportunities in mineral and energy-rich areas in Africa, he said.

Kibar Holding targets between 3 to 7 percent growth each year, Ali Kibar said, noting that their revenues amounted to $4.6 billion last year. “Of which 70 percent came from exports. We are exporting goods manufactured at our 20 facilities to more than 100 countries in five continents.”

In the first half of 2022, the group grew by 30 percent in terms of turnover, Kibar said.

Assan Alüminyum has become one of the two top manufacturers in Europe by having boosted the production capacity to 360,000 tons, commented Haluk Kayabaşı, CEO of Kibar Holding.

Exports account for 75 percent of the aluminum company’s sales, he said, adding that they will invest $80 million to build a recycling facility next year.

Advocates staged a tent city in the lobby of City Hall during Mayor Lori Lightfoot's budget address on Monday, Oct. 3, 2022, calling on Chicago to provide a dedicated stream of funding to tackle the … END_OF_DOCUMENT_TOKEN_TO_BE_REPLACED

The candidates face off Dec. 6 in the final Senate contest of the 2022 midterms because neither surpassed 50% of the vote in the general election a little more than two weeks ago, which included a … END_OF_DOCUMENT_TOKEN_TO_BE_REPLACED