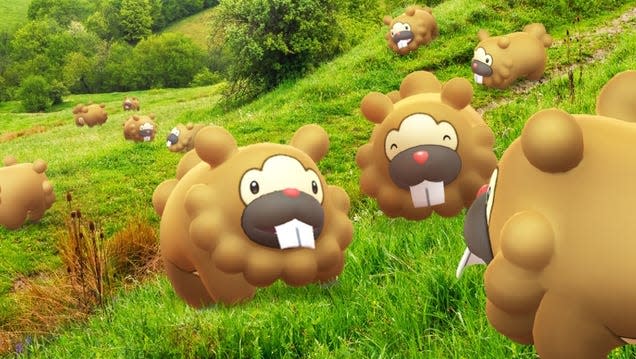 My personal life motto is to live every Thursday like it’s Bidoof Day, but especially this Thursday, because it actually is Bidoof Day. Why? Much like Bidoof itself, the answer is unknowable.

What that means in tangible terms, however, is that Bidoof—a “plump mouse” Pokémon that looks much more like a squirrel-beaver hybrid—is going to overrun Pokémon Go for a day. The game’s development team says in a blog post that Bidoof will be appearing at an “incredibly” high rate beginning at 10 AM local time on July 1 and will be the only Pokémon you can take on in one-star, three-star, and five-star raids. If you’re lucky, some of them might be shiny. Any Bidoof you catch on July 1—at least until the event’s conclusion at 8 PM local time—will know Superpower, and you’ll be able to teach them Ice Beam, Shadow Ball, or Thunderbolt during or after the event if you have the right TMs. So basically, welcome to build-a-Bidoof workshop.

Bidoof will also be everywhere else: rounding out Team Rocket grunts’ teams, featuring prominently in a special research event with choices that impact the story (which will of course earn you a Bidoof-themed hat), and duking it out in a battle league cup in which “only Bidoof will be eligible” and “teams of only Bidoof will be allowed.” In summary: Bidoof.

Bidoof Day serves as the conclusion to Pokémon Go’s Bidoof Breakout event, which began on June 25. The rate at which Bidoof appear has been increasing over the course of the event, so on Bidoof Day, we will officially hit Maximum Bidoof. Then, presumably, all of reality will reset, beginning anew with a single mote of dust floating through an empty universe. After thousands, millions, or billions of years, it will open its mouth and sing the song that creates life: “Bidoof.”

R. Kelly's faces a federal trial from Monday on charges he rigged his 2008 state child pornography trial by threatening and paying off a girl who he allegedly filmed himself having sex with when he … END_OF_DOCUMENT_TOKEN_TO_BE_REPLACED

Battered by the lingering pandemic, a rise in inflation, supply chain slowdowns and recessionary fears becoming reality, the healthcare industry has faced crisis after crisis over the past several … END_OF_DOCUMENT_TOKEN_TO_BE_REPLACED

“It’s not really livable unless you did a lot of renovation throughout,” Birov said. Built in about 1902, the pillared Classical Revival house was owned by the family of executive outplacement guru … END_OF_DOCUMENT_TOKEN_TO_BE_REPLACED