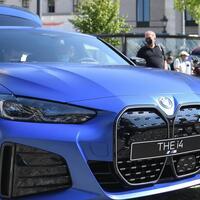 German carmaker BMW will invest $1.7 billion in the production of electric vehicles in the United States.

The plan includes $1 billion towards expanding the company’s Spartanburg US manufacturing plant and $700 million for a new battery assembly facility, BMW said in a statement.

“The BMW group continues the roll-out of its electromobility plan with a new investment in the US,” the company said.

The German group has also signed an agreement with Chinese battery manufacturer Envision AESC, which will “build a new battery cell factory in South Carolina” with an annual capacity of up to 30 GWh.

The group plans to produce at least six fully electric BMW X models at the Spartanburg plant by 2030.

The aim is for the factory to become “a major driver for our electrification strategy”, said Oliver Zipse, chair of BMW’s management board.

The move is part of a shift towards electrification at BMW and in the German car industry as a whole.

BMW already sells the i3 model but it has nonetheless lost market share to Tesla.

CHICAGO — A Chicago man faces criminal charges in the riot at the US Capitol nearly two years ago.  Federal authorities say James McNamara was identified as the suspect seen repeatedly ramming the … END_OF_DOCUMENT_TOKEN_TO_BE_REPLACED

Other provisions would loosen the definition of an EV worker and appear to be aimed at existing automakers in Illinois, especially Stellantis and Ford. They have huge conventional auto assembly plants … END_OF_DOCUMENT_TOKEN_TO_BE_REPLACED