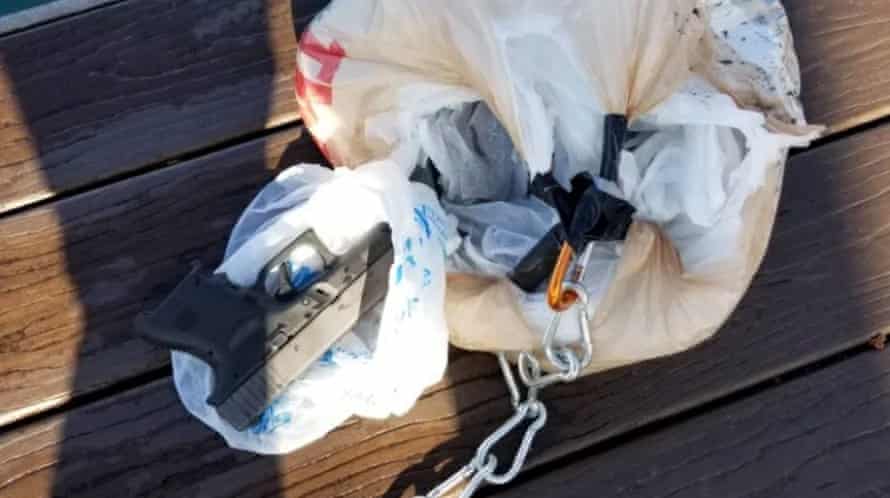 Police in Canada have intercepted a drone which crossed the border from the United States carrying a shopping bag with nearly a dozen handguns – but only after the pilot crashed the device into a nearby tree.

Officers in southern Ontario were called to a home near the town of Port Lambton, north-east of Detroit, after residents reported seeing a stranger maneuvering a commercial drone.

“Our neighbour had spotted someone in our yard in the middle of the night and he had a remote control,” Christine Ackwood told CTV News. “He wasn’t sure what was going on.”

But the drone operator lost control of the drone and sent it careening into a tree before fleeing in a waiting vehicle.

Police recovered the drone with bucket truck, and that a plastic shopping bag was attached with metal carabiners and electrical tape.

Inside, officers discovered 11 handguns – most of which were weapons prohibited in Canada. One of the images shared by police appears to show the serial numbers of a black handgun had been sanded off.

Officers suspect the drone travelled east from Michigan across the St Clair River, which marks the border between Canada and the United States. But police still do not know who was piloting the drone, and who the illicit delivery was intended for.

Many handguns used to commit crimes in Canada are secreted into the country from the United States. In the past, smugglers have used transport trucks, passenger vehicles and aircraft to evade authorities.

The use of a drone suggests groups could be trying out new strategies, but it is unclear if Friday’s discovery is the first time a drone has been used. The Ontario provincial police service did not immediately respond to a request for comment.

Gov. J.B. Pritzker on Wednesday signed into law legislation that bans so-called "ghost guns" across Illinois, making it the first Midwest state to do so. House Bill 4383 aims to crack down on "ghost … END_OF_DOCUMENT_TOKEN_TO_BE_REPLACED