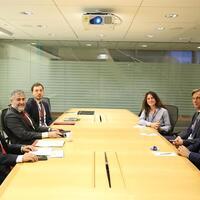 Treasury and Finance Minister Nureddin Nebati has held a meeting with the senior executives of Goldman Sachs in Washington, D.C.

“As part of our ongoing contacts in Washington DC on the occasion of the G20 Ministerial Meeting and the IMF-World Bank Annual Meetings, we had a very productive meeting with the senior executives of Goldman Sachs,” Nebati wrote on Twitter following Oct. 12’s meeting.

“At the meeting, we discussed the global macroeconomic developments and conveyed the opportunities offered by the Turkish economy and our strong investment potential,” he said.

Nebati also held meetings with Nicolas Kazadi, the finance minister of the Democratic Republic of the Congo, and Denys Denya, the vice chairman of Afreximbank.

“Within the scope of the meeting, we comprehensively discussed the topics that will strengthen our relations and cooperation in the African Continent and increase our trade volume,” the minister said.

Another meeting of Nebati was with Argentinian Economy Minister Sergio Massa, in which the two ministers “discussed our economic and commercial relations comprehensively and exchanged views on the steps that can be taken in the coming period.”

Advocates staged a tent city in the lobby of City Hall during Mayor Lori Lightfoot's budget address on Monday, Oct. 3, 2022, calling on Chicago to provide a dedicated stream of funding to tackle the … END_OF_DOCUMENT_TOKEN_TO_BE_REPLACED

The candidates face off Dec. 6 in the final Senate contest of the 2022 midterms because neither surpassed 50% of the vote in the general election a little more than two weeks ago, which included a … END_OF_DOCUMENT_TOKEN_TO_BE_REPLACED