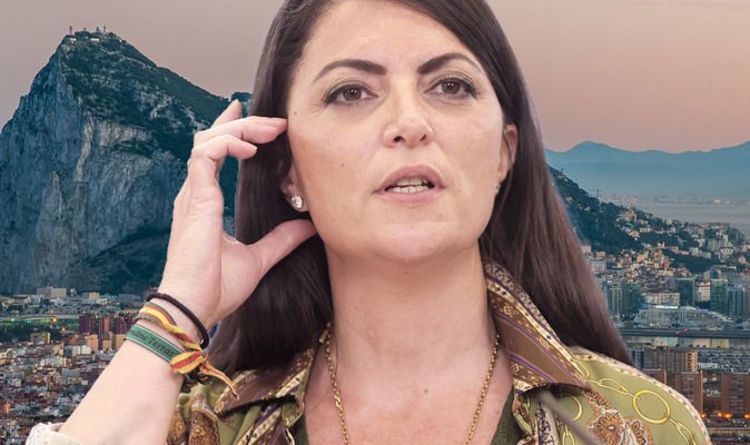 In a press conference yesterday, Macarena Olona, the general secretary of the Vox parliamentary group, claimed that her party would try to “suffocate” Gibraltar immediately after being elected. Mr Olona, who was accompanied by the Vox deputy for Cadiz at the press conference, Augustin Rosety, said: “I come to say this loud and clear: Gibraltar is Spanish.”

She continued: “We must close the gate to eliminate any possibility of access to Gibraltar, whether by land, sea or air because we are facing a real pirate cave with the greatest pirate in front, Mr Picardo [mayor of Gibraltar], and those who pay the consequences are the citizens of the Campo de Gibraltar.”

Ms Olona also insisted that it is necessary to defend the Spanish sovereignty of Gibraltar.

The politician said: “We have to stop being accomplices.

“We need appropriate support measures for Spanish workers. We cannot continue to support the blackmail and invasion of Spanish territory.

“Immediate diplomatic measures and the closing of the gate are urgently needed to exert real pressure.”

“That is why the Moroccan government laughs at us and exerts blackmail to the point of calling Ceuta and Melilla occupied territories.”

She added: “With Vox there will be solutions. Only Vox says it loud and clear: Gibraltar is a Spanish territory invaded by the British.

Mr Rosety added to Ms Olona’s claims by suggesting that Spain is being colonised.

He said: “It is shameful. It represents a loss of international prestige and the strategic weight of Spain.

“This is a British military base in a colony that is an anachronism and that the British get £60million a year at the cost of our security and prestige.

“We are taking risks because of their nuclear submarines and missiles. We do not allow this in Spain in other military bases.”

The Vox deputy added that now that the United Kingdom is no longer part of the European Union, “complacency must end”.

Mr Rosety continued: “We have no obligation as partners to help the prosperity of this base even though the socialist Government has accepted the idea of shared prosperity.

“Gibraltar wants the toast spread on both sides and to maintain the financial benefits and for this customs control to disappear.”

Lastly, Mr Rosety claimed that the EU is taking Spain’s side while Spain is taking the side of the United Kingdom.

The deputy said: “Gibraltar is the epicentre of all the organised crime problems in the area.

“The Council of Europe has already said that the financial opacity is such that it could even be covering up activities in support of terrorism.”

A representative for Vistria declined to comment. Founded in 2013 and led by Marty Nesbitt and Kip Kirkpatrick, Vistria manages more than $8 billion in assets and invests across health care, education … END_OF_DOCUMENT_TOKEN_TO_BE_REPLACED