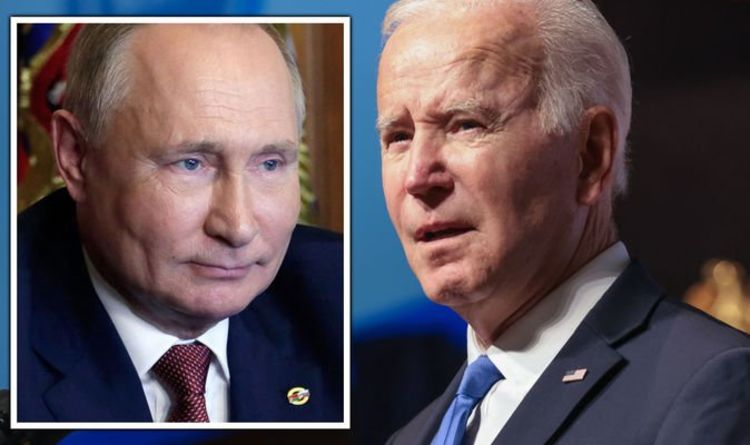 The US President will attempt to de-escalate tensions after Russia’s foreign minister warned of a “nightmare scenario” in eastern Europe. The high-profile bilateral talks come after Anthony Blinken and Sergei Lavrov clashed over Ukraine on Thursday. Although the US warned Russia must end its military build-up, Russia’s foreign minister claimed Washington is at risk of taking Europe back to the “nightmare” of a military conflict.

Amid fears of a large Russian military presence in the Donbas region, Mr Putin and the US President will hold virtual talks in the coming days, Politico reports.

Mr Lavrov met with his US counterpart at a conference of the Organisation for Security and Co-operation in Europe this week.

On Thursday, Mr Lavrov warned Nato was refusing to de-escalate tensions to prevent a possible conflict.

Speaking at the conference in Stockholm, Mr Lavrov said: “The alliance’s military infrastructure is being irresponsibly brought closer to Russia’s borders in Romania and Poland, deploying an anti-missile defence system that can be used as a strike complex.

“American medium-range missiles are about to appear in Europe, bringing back the nightmare scenario of a military confrontation.

“No one should strengthen their security at the expense of the security of others.

“Further advance of NATO to the east will unambiguously affect the fundamental interests of our security.”

Ukrainian officials have warned up to 100,000 Russian troops have massed on the border in the Donbas region and the Crimea.

JUST IN: Merkel admits Nord Stream 2 was her ‘biggest mistake’ as Chancellor

“The best way to avert a crisis is through diplomacy.

“The United States is willing to facilitate diplomacy but if Russia decides to pursue confrontation there will be serious consequences.”

Ukrainian president, Volodymyr Zelensky has called for direct talks with Russia amid the rise in military personnel.

He said: “We must tell the truth that we will not be able to end the war without direct talks with Russia.

“Let’s be honest, the war in Donbass has been going on for eight years. Eight years since Russia annexed Crimea.

Chicago Shooting News Live: A gunman on a rooftop opened fire on an Independence Day parade in suburban Chicago on Monday, killing at least six people, wounding at least 30 and sending hundreds of … END_OF_DOCUMENT_TOKEN_TO_BE_REPLACED

The real estate industry is beyond crowded — it seems like agents are popping up everywhere and taking aim at your clients. So, how can you cut through all that noise to stand out? You’ve got to … END_OF_DOCUMENT_TOKEN_TO_BE_REPLACED

Chicago Mayor Lori Lightfoot confirmed to the New York Times that the Chicago Police Department is assisting in the response and investigation.  “Law enforcement is working hard to bring the shooter … END_OF_DOCUMENT_TOKEN_TO_BE_REPLACED