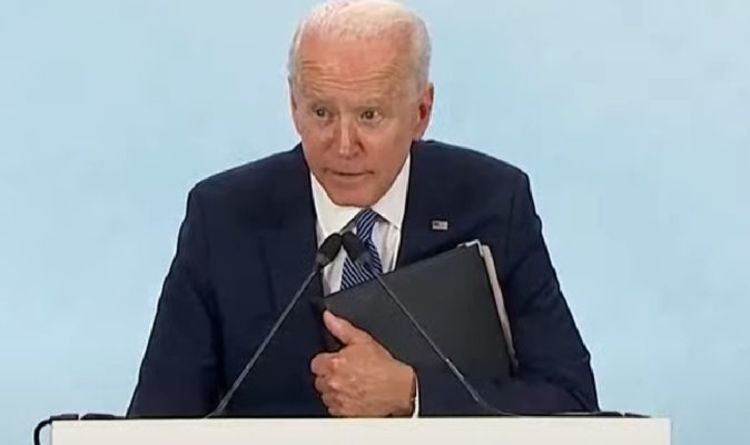 USA President Joe Biden held a press conference at the G7 to inform the media about how productive the meetings had been with other international leaders. He insisted that America was back and that progress was made on China, coronavirus and climate change. After reluctantly taking another question having moved to end the press conference, the US President snapped at a reporter.

Mr Biden was asked why he had kept former President Donald Trump’s steel and aluminium sanctions and how that was being received by international leaders.

Mr Biden then barked back he had only been President for 120 days and to “give him a break.”

Before taking the question, President Biden said: “I’m going to get in trouble with my staff but go ahead.

“Pretend that I didn’t answer you.”

The reporter said: “You have repeatedly said that America is back.

“At the same time, you have kept in play some Trump-era steel and aluminium sanctions.

“I wanted to ask you, when you are having these conversations with European allies who are very concerned about these sanctions, how do you justify that?”

Mr Biden interrupted to say: “120 days, give me a break, need time.

“Three, fuelling infrastructure development in places that most badly need it.

“The only way we are going to meet the global threats is by working together.”

WAUCONDA, Ill. (AP) — A bison that escaped a suburban Chicago farm last September and had been living in the wild since was recaptured Wednesday, officials said. The 1,300-pound bison some had come … END_OF_DOCUMENT_TOKEN_TO_BE_REPLACED

With suburban home value growth surpassing that of urban homes, the most popular areas appear to be outside the city. According to Zillow, all 10 of its current top markets are located roughly 30 … END_OF_DOCUMENT_TOKEN_TO_BE_REPLACED

The measure passed 30-19. After the first meeting adjourned, the City Council briefly met for a second time during a special meeting called for by 30 aldermen to grill city leaders about Chicago’s … END_OF_DOCUMENT_TOKEN_TO_BE_REPLACED