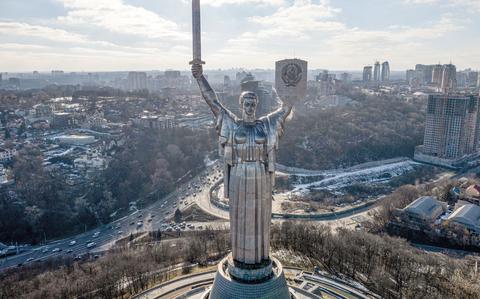 A view of Ukraine’s the Motherland Monument in Kyiv Sunday, Feb. 13, 2022. (Efrem Lukatsky/AP)

MOSCOW — The Kremlin signaled Monday it is ready to keep talking with the West about security grievances that led to the current Ukraine crisis, offering hope that Russia might not invade its beleaguered neighbor within days as the U.S. and Europe increasingly fear.

Questions remain about Russian President Vladimir Putin’s intentions, however. And countries around Europe are evacuating diplomats and on alert for possible imminent war amid the worst East-West tensions since the Cold War.

On a last-ditch diplomatic trip, Germany’s chancellor said there are “no sensible reasons” for the buildup of more than 130,000 Russian troops on Ukraine’s borders to the north, south and east, and he urged more dialogue. Britain’s prime minister said Europe is “on the edge of a precipice” — but added, “there is still time for President Putin to step back.”

Despite warnings from Washington, London and elsewhere that Russian troops could move on Ukraine at a moment’s notice, Monday’s meeting between Putin and Foreign Minister Sergey Lavrov suggested otherwise.

At the session with Putin, Lavrov argued that Moscow should hold more talks with the U.S. and its allies despite their refusal to consider Russia’s main security demands.

Moscow, which denies it has any plans to invade Ukraine, wants Western guarantees that NATO won’t allow Ukraine and other former Soviet countries to join as members. It also wants the alliance to halt weapons deployments to Ukraine and roll back its forces from Eastern Europe, demands flatly rejected by the West.

The talks “can’t go on indefinitely, but I would suggest to continue and expand them at this stage,” Lavrov said, noting that Washington has offered to conduct dialogue on limits for missile deployments in Europe, restrictions on military drills and other confidence-building measures. Lavrov said possibilities for talks “are far from being exhausted.”

His comments, at an appearance orchestrated for TV cameras, seemed designed to send a message to the world about Putin’s own position: namely, that hopes for a diplomatic solution aren’t yet dead.

Putin noted the West could try to draw Russia into “endless talks” without conclusive results and questioned whether there is still a chance to reach agreement on Moscow’s key demands. Lavrov replied that his ministry wouldn’t allow the U.S. and its allies to stonewall Russia’s main requests.

In a phone call Sunday, U.S. President Joe Biden and Ukrainian President Volodymyr Zelenskyy agreed to keep pushing both deterrence and diplomacy. Zelenskyy’s office also quoted him suggesting a quick Biden visit would help — a possibility that was not mentioned in the White House summary of the call. Such a visit would be unlikely as the U.S. is now operating with a skeleton diplomatic staff in Kyiv.

During what could be a crucial week for Europe’s security, German Chancellor Olaf Scholz visited Ukraine before heading to Moscow for talks with Putin on a high-stakes diplomatic foray.

After meeting Zelenskyy, Scholz urged Russia to show signs of de-escalation, and reiterated unspecified threats to Russia’s financial standing if it invades.

“There are no sensible reasons for such a military deployment,” Scholz said. “No one should doubt the determination and preparedness of the EU, NATO, Germany and the United States” in case of an military offensive.

Zelenskyy said, “It is in Ukraine that the future of the European security architecture — of which our state is a part — is being decided today.”

Kyiv residents received letters from the mayor urging them “to defend your city,” and signs appeared in apartment buildings indicating the nearest bomb shelter. The mayor says the capital has about 4,500 such sites, including underground parking garages, subway stations and basements.

Dr. Tamara Ugrich said she stocked up on grains and canned food, and prepared an emergency suitcase.

“I don’t believe in war, but on TV the tension is growing every day and it’s getting harder and harder to keep calm. The more we are told not to panic, the more nervous people become,” she said.

Others heeded the advice of Ukraine’s leaders not to panic. Street music flooded central Maidan Square on Sunday night and crowds danced. “I feel calm. You should always be ready for everything, and then you will have nothing to be afraid of,” said Alona Buznitskaya, a model.

Some airlines canceled flights to Kyiv and troops unloaded shipments of weapons from NATO members.

NATO countries have also been building up forces in eastern Europe. Germany’s military said the first of 350 extra troops it is sending to bolster NATO forces in Lithuania were dispatched Monday. Lithuania moved diplomats’ families and some nonessential diplomatic workers out of Ukraine after the U.S. and others pulled most of their staff from embassies in Kyiv.

“It’s a big mistake that some embassies moved to western Ukraine,” Zelenskyy said. “It’s their decision, but ‘western Ukraine’ doesn’t exist. It’s united Ukraine. If something happens, God forbids, it (escalation) will be everywhere.”

The U.S. and its NATO allies have repeatedly warned Russia will pay a high price for any invasion — but they have sometimes struggled to present a united front. Scholz’s government, particularly, has been criticized for refusing to supply lethal weapons to Ukraine or spell out which sanctions it supports, raising questions about Berlin’s resolve. No new specifics emerged from his visit to Kyiv.

So far, NATO’s warnings appear to have had little effect: Russia has only bolstered troops and weapons in the region and launched massive drills in its ally Belarus, which also neighbors Ukraine. The West fears that the drills, which run through Sunday, could be used by Moscow as a cover for an invasion from the north.

Russia has repeatedly brushed off the concerns, saying it has the right to deploy forces on its territory.

One possible off ramp emerged this week: Ukraine’s ambassador to the U.K., Vadym Prystaiko, pointed at a possibility of Ukraine shelving its NATO bid — an objective that is written into its constitution — if it would avert war with Russia.

“We might — especially being threatened like that, blackmailed by that, and pushed to it,” Prystaiko told BBC Radio 5.

On Monday, Prystaiko appeared to back away from that, saying that “to avoid war we are ready for many concessions … but it has nothing to do with NATO, which is enshrined in the constitution.”

Asked about the comment, Kremlin spokesman Dmitry Peskov said Russia would welcome such a move but noted its quick repudiation by Ukraine’s Foreign Ministry.

Some lawmakers called for Prystaiko’s dismissal — but the fact the idea was raised at all suggests it is being discussed behind closed doors.

Meanwhile, a meeting will take place Tuesday by the Organization for Security and Cooperation in Europe on the Russian deployments. But it is unclear whether it could defuse tensions.

Some members of the OSCE mission monitoring a shaky cease-fire in eastern Ukraine have pulled out, and Russia-backed separatists allege their departure could facilitate provocations.

With the region on edge, Russia’s Defense Ministry protested to the U.S. Embassy’s military attache Saturday what it said was a U.S. submarine in Russian waters near the Kuril Islands in the Pacific. Russia said the submarine initially ignored orders to leave, but left after the navy used unspecified “appropriate means.” The U.S. denied its ship ever entered Russian waters.

Asked by lawmakers Monday if the military could strike foreign warships that enter Russian waters, deputy General Staff chief Stanislav Gadzhimagomedov said it stands ready, but added such decisions are only made at the highest level.

Russia and Ukraine have been locked in a bitter conflict since 2014, when Ukraine’s Kremlin-friendly leader was ousted by a popular uprising. Moscow responded by annexing the Crimean Peninsula and backing the separatists in the east, where fighting has killed over 14,000 people.

A 2015 peace deal brokered by France and Germany helped halt large-scale battles, but regular skirmishes have continued, and efforts to reach a political settlement have stalled.

Gov. J.B. Pritzker on Wednesday signed into law legislation that bans so-called "ghost guns" across Illinois, making it the first Midwest state to do so. House Bill 4383 aims to crack down on "ghost … END_OF_DOCUMENT_TOKEN_TO_BE_REPLACED