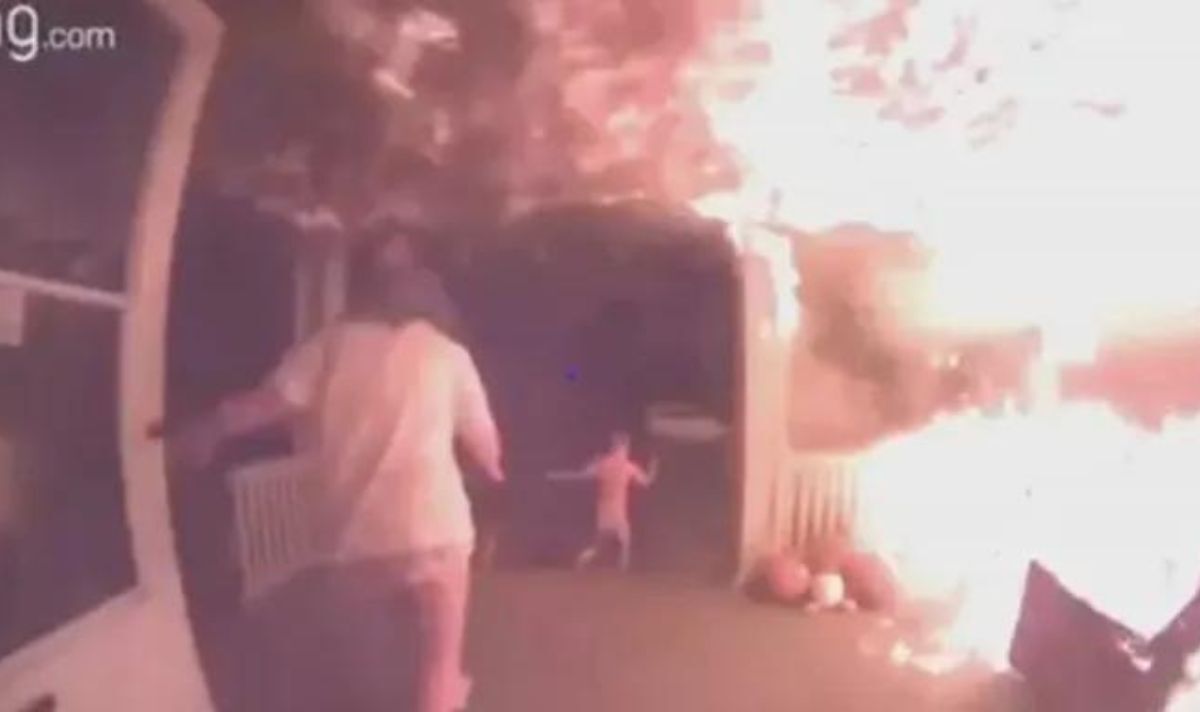 A driver who took a wrong turn and stumbled on a raging house fire has been dubbed a hero after saving four siblings from the blaze. Brendon Birt saved four youngsters from their burning home in the US state of Iowa on Sunday, October 23. He had been driving through the city and after accidentally making a wrong turn, he happened upon the huge blaze.

After witnessing flames breaking through the home, the heroic passerby said he had a feeling someone was in the house and quickly rushed into the burning building.

He told local ABC News affiliate KETV: “I just felt like somebody was in there because it was so late at night, you know? I just knew that I had to act quick.”

The four siblings, aged between 8 and 22, were inside the house sleeping while the flames engulfed the property. The smoke detectors failed to go off, according to reports.

Birt, an aspiring rapper who goes by the name Blase 96 in his music, said he discovered the unnerving scene after taking a wring turn.

Their mum and owner of the property, Tender Lehman, had been out of town in Montana for a family emergency when the terrifying incident happened.

The ring doorbell caught the harrowing moments as the inferno ravaged the home’s structure and the four siblings – aged 8, 14, 17 and 22 – made it out of the property, alerted by Mr Birt.

After making his way to the property, the heroic stranger began banging on the windows shouting “fire”.

“Every second that was going by was just getting worse,” Birt told the station about waiting for anyone inside to come out of the blaze.

The footage shows the three younger siblings make it out the front door, shortly followed by the 22-year-old moments before the blaze took hold of the front porch.

He said: “They came out the door. Like, I just felt like, I just wanted to break down and cry. Like, I don’t even know these people here.”

The oldest sibling, Bryce Harrison, told the local station that he woke up to “an oven of heat and flames on the front wall.”

In an interview with NewsNationNow’s Prime, Birt described his thought process saying: “I decided to act real quick, because I knew how bad it was going to get. I just had to assume that people were in there. I just did what I had to do. Luckily it turned out to be the way it was supposed to be.”

The sibling’s parents, who were out of town, were made aware of the fire at their property and Ms Lehman expressed her gratitude to Mr Birt.

She said: “My kids wouldn’t have made it, man. They’re safe and they’re safe because of him. I mean, lives were saved here.”

Sadly, five of the family’s seven dogs died in the fire and the house was completely destroyed, but Ms Tehman said she was just thankful her kids made it out uninjured.

The cause of the fire remains under investigation, according to the Red Oak Fire Department.

There has been a GoFundMe page set up for the family, who say they have been left homeless from the devastating fire.

The White House announced on Wednesday that the US was eager to continue working with Pakistan as a new general assumed leadership of the army command in Islamabad. The Pakistan Army’s command was … END_OF_DOCUMENT_TOKEN_TO_BE_REPLACED

PHOENIX (AP) — Devin Booker scored a season-high 51 points in just three quarters, Deandre Ayton had 30 points and 16 rebounds and the Phoenix Suns stretched their winning streak to six games with a … END_OF_DOCUMENT_TOKEN_TO_BE_REPLACED

The 202-room Courtyard by Marriott Boston Marlborough has been sold for $15.3 million. The deal for the property at 75 Felton St. in Marlborough closed on Monday, according to the Middlesex South … END_OF_DOCUMENT_TOKEN_TO_BE_REPLACED