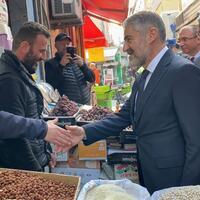 Treasury and Finance Minister Nureddin Nebati will meet with his counterparts, executives of international organizations and global companies on the sidelines of the IMF-World Bank meetings in Washington, D.C., this week.

According to a statement released by the ministry on April 16, Nebati will attend the gathering of G20 finance ministers and central bank chiefs in the U.S. capital city.

He will also address representatives of think tanks and non-governmental organizations to explain the recent developments in the Turkish economy and the economic policies followed amid the rising global risks and deteriorating outlook.

The Spring Meetings of the IMF and World Bank will be held from today to April 24.

The annual meetings will take place in the shadow of the Russian invasion of Ukraine.

“During this week policymakers, experts, influencers and other key stakeholders will convene to discuss these challenges, participate in a wide-ranging series of events, and design pathways forward to build on the policies and programs already under implementation by the World Bank Group and its partners,” the global lender said in a statement.

The IMF and the World Bank will release the World Economic Outlook and Global Financial Stability reports tomorrow.

IMF Managing Director Kristalina Georgieva warned last week that Russia’s war against Ukraine was weakening the economic prospects for most of the world’s countries and called high inflation “a clear and present danger” to the global economy.

She said the consequences of Russia’s invasion were contributing to economic downgrades for 143 countries, although most of them should continue to grow. The war has disrupted global trade in energy and grain and is threatening to cause food shortages in Africa and the Middle East.

The IMF will further downgrade the estimate for global growth that was cut to 4.4 percent in January, she added.

“We will reach a reasonable level of inflation at the end of the year,” he said in the southeastern province of Mardin on April 10.

The World Bank expects emerging and developing countries in the Europe and Central Asia region to contract by 4.1 percent this year, a sharp reversal from the 3 percent growth projected before the war.

“Turkey’s economy grew 11 percent in 2021, the fastest among G20 countries, as COVID-19 related measures were gradually relaxed in Turkey and abroad,” it said in a report released on April 10.

“Economic growth is expected to moderate to 1.4 percent in 2022 as macro-financial volatility intensifies and the impacts of Russia-Ukraine materialize, before returning to 3.2 percent and 4.0 percent in 2023 and 2024, respectively.”

“Net exports are expected to drive growth in 2022, offsetting the drag from contractions in investment and private consumption,” it added.

According to the report, the Turkish banking sector remains highly capitalized and with adequate FX buffers. However, removing forbearance measures is likely to pressure banks’ balance sheets.

The fire at the former Pheasant Run Resort, 4051 E. Main St., broke out Saturday afternoon, sending huge plumes of smoke into the sky surrounding the closed resort and drawing dozens of onlookers who … END_OF_DOCUMENT_TOKEN_TO_BE_REPLACED

As the 2022 political season gets into full swing, one of the most intriguing candidates for elected office is Herschel Walker. The star running back with the University of Georgia and Dallas Cowboys … END_OF_DOCUMENT_TOKEN_TO_BE_REPLACED