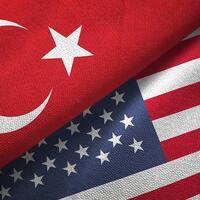 A group of Turkish politicians, businesspeople and bureaucrats recently traveled to the U.S. to hold talks with officials from the State Department, the Department of Commerce as well as thinktanks and business circles.

Following the talks, the parties agreed that a delegation of U.S. business people will pay a visit to Turkey and the Turkish-U.S. Business Council will hold a meeting after a two-year hiatus in the U.S in June.

During the Turkish delegation’s visit, Turkish and U.S. officials discussed the prospects for establishing new logistics centers and upgrading the existing ones in order to increase the trade between the two countries and facilitate faster shipments of goods.

Energy was one of the main items the parties explored, while possible investments in the field of renewables were also discussed, according to sources.

Liquified natural gas (LNG) imports from the U.S. meets some 8 percent of Turkey’s consumption, the participants in the talks noted, underlining the importance of diversifying energy supplies.

The U.S. side was warm to the idea that Turkey could welcome the western companies, which leave Russia, but apparently disapproved of the inflow of Russian capital into the country, the sources said.

CHICAGO (CBS) -- Chicago Police are looking for a man who tried to kidnap a woman in the city's West Loop but was thwarted by some good Samaritans. This is at least the second time this has happened … END_OF_DOCUMENT_TOKEN_TO_BE_REPLACED

Illinois homes sold somewhat faster in August 2022 than in the year prior, even as median prices rose statewide, according to new data from Illinois REALTORS®. Though statewide home sales were down … END_OF_DOCUMENT_TOKEN_TO_BE_REPLACED

“I’m not one to really tell people what to do,” said Kennedy, 35, who lives in Milwaukee and works in software sales. But if a friend tried to order a delta-8 drink, “I would tell them, ‘Absolutely … END_OF_DOCUMENT_TOKEN_TO_BE_REPLACED