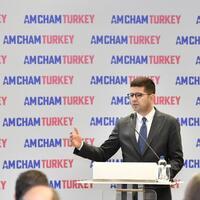 A delegation including senior presidential advisers, executives of the Turkish Exporters’ Assembly (TİM) and several businesspeople has started a trade diplomacy tour in New York and Washington D.C.

As part of the tour, which was planned to take place between yesterday and March 18, the members of the delegate will meet with officials from the U.S. Department of State, Department of Commerce and the Chamber of Commerce.

They will also hold meetings at the Atlantic Council, a think-tank, on bilateral trade ties between Turkey and the United States.

Discussion panels on the two countries’ relations and the target of a bilateral trade volume of $100 billion will take place at the Turkish House (Türkevi) in New York.

Ahmet Burak Dağlıoğlu, the head of the presidential investment office, and Cemil Ertem, presidential adviser and a member of the Economic Policies Board, are in the delegation, which also includes Ziya Altunyaldız, the chair of the parliamentary commission on industry, trade and energy.

TİM deputy head Başaran Bayrak and Ayhan Zeytinoğlu, vice-chair of the Union of Chambers and Commodity Exchanges of Turkey (TOBB), are leading businesspeople in the delegation.

Turkey’s top export market was Germany in January with $1.78 billion, according to data from the Trade Ministry. It was followed by the United States ($1.29 billion) and the United Kingdom ($1.09 billion).

CHICAGO (CBS) -- Chicago Police are looking for a man who tried to kidnap a woman in the city's West Loop but was thwarted by some good Samaritans. This is at least the second time this has happened … END_OF_DOCUMENT_TOKEN_TO_BE_REPLACED

Illinois homes sold somewhat faster in August 2022 than in the year prior, even as median prices rose statewide, according to new data from Illinois REALTORS®. Though statewide home sales were down … END_OF_DOCUMENT_TOKEN_TO_BE_REPLACED

“I’m not one to really tell people what to do,” said Kennedy, 35, who lives in Milwaukee and works in software sales. But if a friend tried to order a delta-8 drink, “I would tell them, ‘Absolutely … END_OF_DOCUMENT_TOKEN_TO_BE_REPLACED